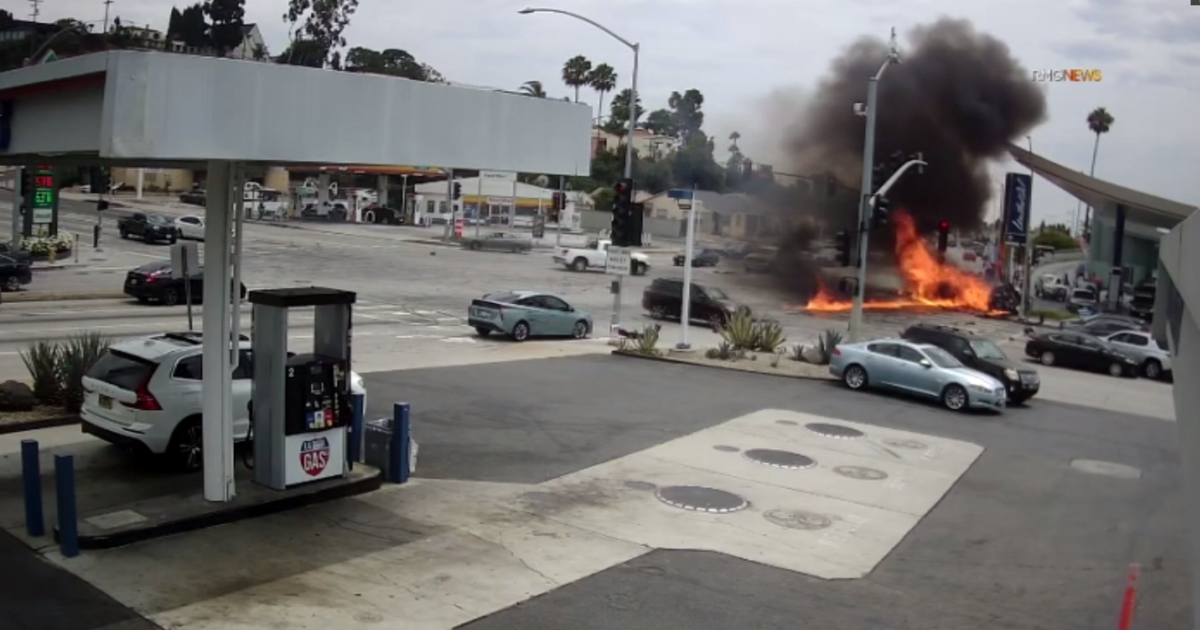 A speeding car ran a red light and plowed into cars Thursday in a fiery crash that killed at least four people, including a baby, just outside of Los Angeles, authorities said.

Shortly after 1:30 p.m., a Mercedes-Benz sedan caused a crash involving as many as six cars near a gas station in the unincorporated Windsor Hills, about 10 miles southwest of downtown L.A., according to the California Highway Patrol.

Several people were flung from the cars and two vehicles caught fire. Television reports showed the blackened and mangled cars, as well as a child’s car seat among the debris covering the street.

Video showed the Mercedes careening through an intersection, striking at least two cars that caught fire and wound up against the gas station’s corner sign. One car also was torn in half.

Three adults, including one who was pregnant, and a baby, were killed, California Highway Patrol Officer Alicia Kolter said.

“I was about to pump gas, and all of a sudden, I hear all the noises from all the collision, and then the fire, explosion, and I saw things, metals, and things flying in the air,” witness Veronica Esquivel told CBS Los Angeles. “So, I just covered myself behind the pump.”

Nine people were injured, including six children, authorities said. Among them was the driver of the speeding Mercedes, who was taken to the hospital with serious injuries, CBS Los Angeles reported.

Debra Jackson, another witness, described what she experienced to CBS Los Angeles. French Finance Minister: I personally will not miss UK’s...

Abramovich’s jet among 100 planes grounded by US

GSMA confirms there will be no Russian Pavilion at...

EXPLAINER: Recession fears grow. But how high is the...

Russian troops near another Ukraine nuclear plant, in Yuzhnoukrainsk,...

Tunisia to raise the prices of some foodstuffs after...

Take a Look Inside the Lagoon of Finding Nemo...

Just Stop Oil: Activists says they have ‘a duty...

How we verify social media posts from the war...

Trump returns to a city poisoned by his legacy...

Pope calls for dialogue, justice to end unrest in...

GOP lawmaker: The Left will ‘lie’ to win elections