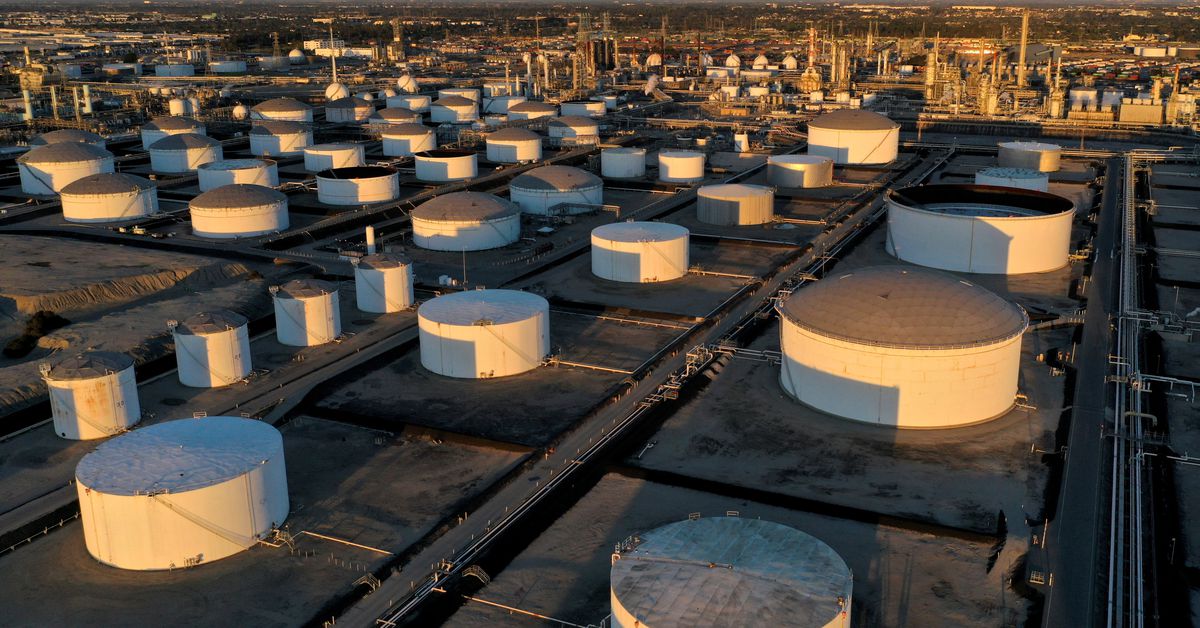 HONG KONG, Aug 5 (Reuters) – Oil languished near its lowest since the start of the war in Ukraine on Friday on fears of a global recession, though stocks ignored such worries, gaining ahead of U.S. jobs data that will give another clue to the health of the world’s largest economy.

“It’s a combination of the inventory data and a bit of worries about demand. Because the market is worried about growth more than inflation – even though inflation is still a major issue – the oil price has come down,” said Prashant Bhayani, chief investment officer for Asia at BNP Paribas Wealth Management.

In another warning sign for the global economy, the closely watched part of the U.S. Treasury yield curve measuring the gap between yields on two- and 10-year Treasury notes reached 39.2 basis points overnight, the deepest inversion since 2000.

An inverted curve is often viewed as portending a recession.

“The bond market is saying there is a pretty high chance of recession, while the equity market is focused on the labour data, said Bhayani.

MSCI’s broadest index of Asia-Pacific shares outside Japan (.MIAPJ0000PUS) rose 0.74%, helped by gains from index heavyweight TSMC (2330.TW), which rose 1.8%, regaining ground it had lost earlier in the week due to U.S. House of Representatives Speaker Nancy Pelosi’s visit to Taiwan.

U.S. employment data, due later in the day, is expected to show nonfarm payrolls increased by 250,000 jobs last month, after rising by 372,000 jobs in June.

“We’re waiting to see a slowdown in the labour market, so if we get a large miss, it will finally confirm the labour market is slowing, and we’ll see some more rallies in U.S. treasuries. If it’s a beat people are going to say, ‘oh well it will eventually miss’,” said Bhayani.

In currency markets the dollar index , which measures the greenback against six major peers, was at 105.86, having fallen 0.6% overnight alongside falling U.S. yields.

Sterling was down a whisker at $1.2142 after taking a spin overnight as the Bank of England raised interested rates and warned a long recession was approaching Britain. read more Westminster Abbey will open roof for first time to...

Apple launches a new program for its App Store...

Buttigieg PAC to back down-ballot Democrats in 2022 midterms

S.Korean truckers say strike is a fight for livelihood...

Walmart’s “Prime Day”-like sale for Walmart+ members is on....

Swig Says Business is Best Done in the Office...

Boys blinded in bombing given back their sight

How an author, a NASCAR star and a young...

Blinken: ‘Have real concerns’ Russia could use chemical weapons

College Professor Explains One Concept in 5 Levels of...

‘I Just Kicked Her Out’: Mother Backed for Evicting...

Razer’s latest acquisition could level up your haptic gaming...

Japan ekes out growth as consumers splurge amid COVID...

Barbara Mandrell returns to the Opry for 50th anniversary

Tear gas or pepper spray used at nightclub when...

Hearts and Hibs seasons will be defined by derbies...

SpaceX: Can meat be grown in space?

Hosepipe ban set to begin in Hampshire and Isle of Wight