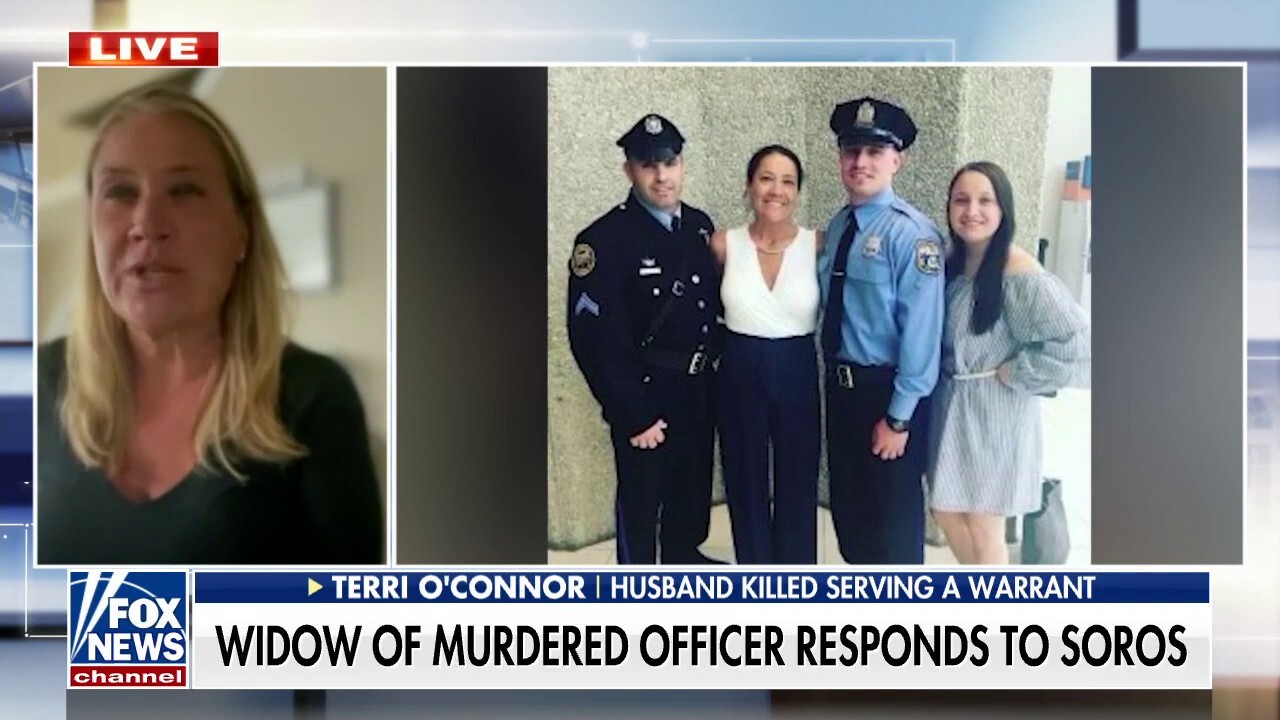 The widow of a slain Philadelphia officer had a message for liberal mega-donor George Soros on Thursday after he defended far-left district attorneys and their policies, including those of Pennsylvania District Attorney Larry Krasner, who she blames for her husband’s murder.

Sgt. JamesO’Connor, a 23-year veteran of the force, was killed in the line of duty while serving an arrest warrant on March 13, 2020. The prosecutors in the case described the alleged killers as dangerous drug dealers with extensive rap sheets.

O’Connor’s widow, Terri, told Fox News on Thursday that she believes her husband would still be alive if not for the far-left bail policies of embattled D.A. Krasner, who allowed these gunmen to return to the streets following multiple arrests.

“They had lengthy criminal records for guns, shootings, murders. I could go on and on about it,” she said on “America Reports.” “They were out of jail repeatedly because of our district attorney and his lenient policies. If those males were locked up and kept where they’re supposed to be, my husband would still be here today.”

who’ve fiercely criticized Krasner’s far-left policies and called for his ousting. In June, a group of Pennsylvania state representatives opened impeachment proceedings against the liberal D.A. for dereliction of duty.

“We have a D.A. who wont prosecute people who are stealing from stores if it’s under $1,000 and small businesses are closing because people can just walk in, take what they want and they know nothing is going to happen to them,” she said.

Terri shared her story in response to an op-ed this week published by the Wall Street Journal, in which liberal billionaire Soros praised the work of progressive district attorneys and dismissed the notion their policies were to blame for crime spikes nationwide.

Soros attempted to make the case that policies implemented by “reform-minded prosecutors” he has donated millions of dollars to have been “popular” and “effective.”

But Terri said her grief and that of so many others like her is proof that the current system is “not working.”

“Its not working. Who thinks that this system of giving people second, third, fourth chances is working? Our city is not safe. It hasnt been safe for quite some time,” she said. “There are younger victims being shot and killed every day. Its because they are let out again and again and every time it happens you see their arrest records. Its disgusting how many priors they have. Nothing is done about it. They are not kept behind bars where they deserve to be.”

State charges have been filed against the men who took O’Connor’s life, along with federal charges which could include the death penalty.

Terri said the federal intervention in the case gave her greater hope that the men who killed her husband will be brought to justice.

“[As far as] Taking this job out of our district attorneys handswe’ve already seen that he goes behind peoples backs and makes deals without telling anybody. I would be sure someone would be out on the street already,” she said, adding, “I am very thankful that they are all locked away in federal prison at this time.”

Yael Halon is a reporter for Fox News Digital. Story tips can be sent to [email protected]

DeSantis says he disagreed with Trump’s decision to shut...

UK’s Johnson vows to stay in office after top...

What Powell Is Monitoring as the Fed Hikes Rates

Climate change: Can the UK afford its net zero...

Husband’s Destruction of His Stepdaughter’s New Piano Enrages the...

US women take advantage of 3 own goals to...

Biden says elections might not be legitimate if reform...

Audit critical of Oklahoma’s use of education relief funds

Bungie’s next game won’t be an FPS like Destiny...

‘You Will Be Towed’: Driver’s Warning Note on Neighbor’s...

Evergreen vessel freed after a month aground in US...

A frank exchange of views: French diplomats on rare...

From Washington – January 6th Committee: Subpoenas Have Been...

Halo Infinite fans have made Hideo Kojima’s P.T. in...