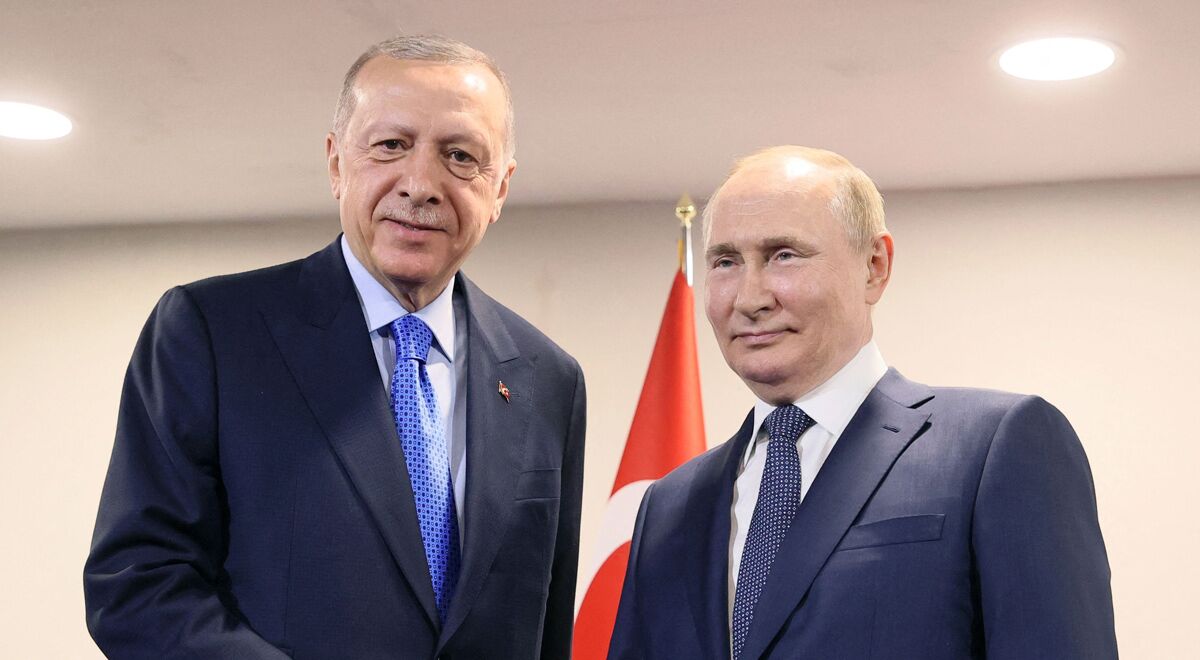 Turkeys attempts to mediate between Russia and Ukraine go beyond a delicate diplomatic balancing act. Its about prestige and strategy for President Recep Tayyip Erdogan.

Erdogan and Russian President Vladimir Putin are meeting for a second time in less than a month in Russias Sochi today to discuss the war in Ukraine. Theyll also hold talks on Turkeys plans for a military incursion into northern Syria, after they failed to reach agreement on the issue last month.

Theyve had a volatile relationship for years. But a shared skepticism and suspicion toward the US and its European allies also allowed them to cultivate ties on trade, energy and even defense that survived a crisis when NATO member Turkeys military downed a Russian fighter jet near the Syrian border in 2015.

The Turkish president has sought to cast himself as a pivotal player in the global arena in conflicts ranging from Syria to Libya and in tensions between Russia, the US and the European Union. This partly explains his efforts to broker agreement between Ukraine and Russia that led to last months deal on grain exports.

Share of grain handling in the 2020-21 season, before the war erupted

As a major importer of wheat and energy, Turkey has been hit hard by the economic fallout from Russias war in Ukraine, with domestic inflation racing to 80%. While Turkish officials insist the price spikes are temporary, Erdogan is aware the situation threatens his popularity ahead of presidential elections scheduled for June.

Erdogan will press Putin at todays talks to accept a Turkish operation in northern Syria against Kurdish militants. The Russian leader has often held the upper hand at previous discussions on Syria, determined to stall Ankaras ambitions and maintain his own dominance in the country.

With Russia consumed by its war in Ukraine, the outcome may be different this time.

Ukrainian gunmen fire a US-made howitzer on the front line in the Kharkiv region on Monday.

here for this weeks most compelling political images and share this newsletter with others. They can sign up here.

Sustained pressure | China sent warships across the Taiwan Straits dividing line today, officials in Taipei said an unusual move signaling its largest drills in decades around the islands will continue. The show of force comes after Beijing broke another precedent by firing four ballistic missiles over Taiwan yesterday, according to the Japanese Defense Ministry.

A screenshot from a video of missiles fired from land.

Tax deal | US Democrats have agreed on a revised version of their tax and climate bill after Kyrsten Sinema, one of their pivotal lawmakers in the 50-50 Senate, said she would back the plan. Her decision removes one of the last hurdles for legislation carrying core components of President Joe Bidens domestic agenda.

The UK is facing a recession akin to the early 1990s, not the credit crunch

The front-runner to be the UKs next prime minister, Liz Truss, said a recession isnt inevitable hours after Bank of England forecasts posted yesterday showed a deepening economic crisis, with Britain weeks away from a downturn that will last for more than a year.

Donor fatigue | International aid to West Africas Sahel region has slumped, threatening the lives of 900,000 people, a medical association working in the area said. Compounding the situation, Russias invasion of Ukraine has distracted world attention from the crisis, halted supplies of grain and vegetable oil and created a worldwide fertilizer shortage, according to the Alliance for International Medical Action.

Fitting in | Hungarian Prime Minister Viktor Orban is used to being pigeonholed as a pariah in Europe. But in Texas yesterday, before an audience of die-hard supporters of former President Donald Trump at the Conservative Political Action Conference, his spiel against progressives, immigrants and the media was warmly embraced.

Dwindling hopes | EU diplomats say the gulf between Iran and the US has widened since the last round of talks in Vienna as negotiations resume to revive the 2015 agreement on the Persian Gulf nations nuclear activities. As Jonathan Tirone reports, their downbeat outlook suggests theres limited prospect for a deal that could ease the global energy crunch by lifting sanctions on Iranian exports.

Volume of material has steadily climbed since U.S. left JCPOA

Bloomberg TV and Radio air Balance of Power with David Westin weekdays from 12 to 1 p.m. ET, with a second hour on Bloomberg Radio from 1 to 2 p.m. ET. You can watch and listen on Bloomberg channels and online here or check out prior episodes and guest clips here.

Pop quiz (no cheating!) Which nations leader decided not to interrupt his vacation to meet Pelosi during her visit to his country? Send your answers to [email protected]

And finally … US basketball star Brittney Griners nine-year drug sentence imposed by a Russian court is heightening pressure on Biden to quickly seal a prisoner swap with the Kremlin to free her. Washington is currently offering to exchange two Russians for Griner and former US Marine Paul Whelan, sources say. Whelan was convicted by a Moscow court in 2020 on espionage charges that he denies.

Griner inside a defendants cage before a court hearing yesterday.

With assistance by Rosalind Mathieson, Muneeza Naqvi, and Michael Winfrey Analysts predict QLED TV popularity will drop which could...

Scientists Have Discovered a New Set of Blood Groups

Justin Bieber Kept Censors On Their Toes With ‘Peaches’...

Turkey vows to defend interests against Greece amid tensions

Queen Elizabeth II: ‘It was such an honour to...

The Therabody TheraFace Pro Is a Versatile Tool

Trump Business and Inaugural Committee to Settle Claims of...

Congressman Michael McCaul on immigration reform and concerns at...

Europe is looking a lot like it did before...

Kane in a hurry to surpass Rooney’s England scoring...

At hearing on school safety and absenteeism, Councilman Stokes...

These 4 Bills need to step up for Josh...

Herschel Walker partnered in 2012 with arm of energy...

Jury finds in favour of Johnny Depp in lawsuit...

Green Cold War or Climate Anarchy? Together We Can...

Biden to give remarks at Walter Mondale’s memorial service

A second Staten Island Amazon warehouse is holding a...

Engadget Podcast: A foldable iPhone, Meta layoffs and the...

Shelling continues near Zaporizhzhia nuclear plant despite arrival of...

The Democratic Nature of DeFi: Real or Imagined?

Is Secret to Happiness Having Gratitude Practice?

OpenAI’s ChatGPT shows why implementation is key with generative...

‘No bright spot in the world’: The founder of...

YouTube Premium’s family plan gets a price hike in...

African health official: Ebola in Uganda is under control

Elon Musk is doubling down on his recession forecasts, but sees some...