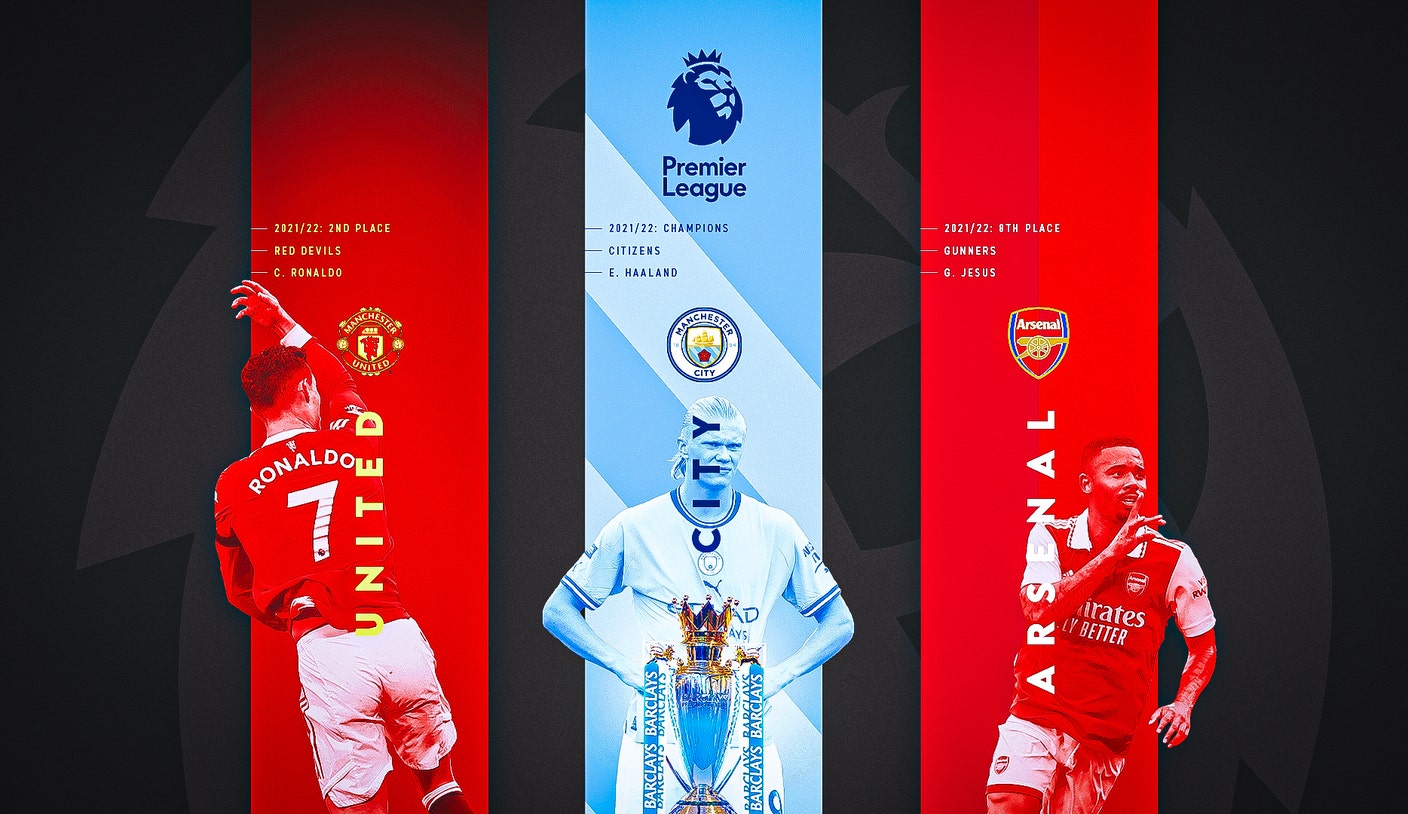 The new Premier League season kicks off Friday, when Arsenal travels across London to meet Crystal Palace, and there are plenty of storylines to keep an eye on across England’s vaunted top flight on as the action gets underway.

Here are five burning questions heading into the 2022-23 campaign.

The rich got richer this summer as two-time defending Premier League champ City added Haaland, the 22-year-old Norwegian goal machine who was the most coveted player available in 2022.

Haaland scored almost at will during his 2.5 seasons with Borussia Dortmund, averaging nearly a goal per game in the German Bundesliga. His numbers in the UEFA Champions League have been even more obscene, with 23 goals in just 19 appearances in. (Haaland has also scored 20 times in 21 appearances for Norway’s national team.)

City is looking to win their fifth English title in six years this season, but they’re really hoping Haaland’s nose for the net carries them all the way to an even more coveted prize: the first-ever Champions League crown for the Emirates-backed club.

But Haaland will be challenged like he never has before in the rough-and-tumble Premier League, where his physical advantages will be minimized and where his only weakness his ability in the air could be magnified.

He could just as easily set the Prem on fire, though, and establish himself as both a bona fide global superstar and the most feared striker in the game along the way. After all, it took Haaland just 12 minutes of preseason play to net his first goal for City:

How will Liverpool fare without Sadio Mane?

In theory at least, the Reds shouldn’t miss Mane much. The 30-year-old Senegalese striker wanted to leave Liverpool who he helped to their first English title in three decades in 2020 after almost 200 Premier League games for a new adventure with Bayern. Liverpool duly spent $100 million to replace him Darwin Núñez, a prolific 23-year-old Uruguayan.

Núñez is a different type of forward than the fleet-footed Mane, who developed an almost telepathic understanding with right winger Mohamed Salah on Merseyside. There is no guarantee that the same sort of chemistry will develop between Núñez, who is more of a box striker than one who excels on the counterattack, Salah and the rest of his teammates.

There is hope, though: After struggling in his first few preseason outings, Núñez scored as the Reds topped Man City in last weekend’s Community Shield. He then credited Salah for helping him settle in.

Liverpool have come excruciatingly close to adding another league title over the last two years, only to fall just shy each time. If Núñez can top the 16 goals Mane scored last season, it could be enough to put the Reds back on top.

Some level of drama is expected inside any club that employs Ronaldo, but the Portuguese superstar has taken his act to telenovela levels in the lead-up to the new campaign. Just a year after returning for his second stint with the Red Devils, Ronaldo wants out.

United finished sixth last May and failed qualify for this season’s Champions League despite Ronaldo’s 18 goals, the third-most in the league. It’s understandable that a player who will turn 38 in February wants to compete in Europe’s top club competition. But for the second time in two years, the late timing of Ronaldo’s transfer request has put his bosses in a tough spot.

Juventus was able to move Ronaldo on the final day of last summer’s transfer window, but there isn’t as much interest in him this year. Champions League mainstays Atletico Madrid, Chelsea, Bayern and Paris Saint-Germain don’t seem to want him. Meantime, Man United can’t really replace him at this stage and may be forced to keep him. Ronaldo isn’t happy; he left Old Trafford before the end of Sunday’s final tune-up against Spain’s Rayo Vallecano, much to the chagrin of new United manger Erik ten Hag.

How or when the standoff ends is anyone’s guess. But for a club desperate to return to the Premier League’s elite one that that has been utterly rudderless since Sir Alex Ferguson retired a decade ago it’s a circus they don’t need on the eve of a new campaign.

Can Gabriel Jesus help Arsenal return to the Top 4?

After finishing between fifth and eighth in each of the last six seasons, the Gunners are a far cry from the club that before that had qualified for the Champions League 20 years in a row.

This could be the season they get back there. Arsenal has fallen behind North London rivals Tottenham Hotspur in recent years, but their acquisition of winger Gabriel Jesus from Manchester City this summer signaled their ambition to improve. The Brazilian isn’t a world-beater, it’s true. But he’s good enough to make a difference for Mikel Arteta’s squad, and he’s got plenty to prove after instigating the transfer in search of more playing time than he received under City boss Pep Guardiola.

The way Arteta sees it, Arsenal added a proven winner.

“He’s an enormous talent, a player with mentality that is so contagious,” the third-year coach and former Gunners midfielder said earlier this week. “He is going to give us a lot.”

Has Chelsea improved enough for a title challenge?

If any team can compete for the title with Liverpool or Man City, it’s Chelsea. The Blues’ new American-lead ownership group has shown a willingness to spend money toward that end this summer, too.

Thomas Tuchel’s team added Raheem Sterling from City. Like Jesus at Arsenal, Sterling’s experience and championship pedigree should fit right in on a squad that claimed both the Champions League and FIFA Club World Cup titles within the last 18 months.

Tuchel also landed prized Napoli center back Kalidou Koulibaly, and he made an addition by subtraction by shipping Romelu Lukaku back to Inter Milan on loan following the striker’s disastrous return to Stamford Bridge.

On Thursday, the Blues announced the signing of 18-year-old prodigy Carney Chukwuemeka from Aston Villa.

Will it be enough to upset the power structure atop the Prem, though? That’s tough to say. Chelsea also lost two important veterans in Antonio Rüdiger (Real Madrid) and Andreas Christensen (Barcelona) on free transfers this summer.

One of the leading soccer journalists in North America, Doug McIntyre has covered United States mens and womens national teams at multiple FIFA World Cups. Before joining FOX Sports in 2021, he was a staff writer with ESPN and Yahoo Sports. Follow him on Twitter @ByDougMcIntyre 4 ways to protect your savings as the Fed...

‘Irreversible’: No easy fix for water fouled by gas...

Elden Ring players are missing out on the Frozen...

Éric Zemmour and the Algerian Question

Man guilty of rape and bid to murder ex-partner...

‘Madison is wrong’: GOP backlash over Cawthorn grows after...

Venezuela’s Maduro in Iran for political and economic talks

Former GOP rep says US should give Ukraine ‘as...

Defense rests in trial of ex-nurse who made medication...

What does Apple Music’s spatial audio success mean for...

Billions of Dollars in Deals Cannot Smooth the US...

Shane Warne bowls Mike Gatting with ‘Ball of the...

Met Police chief on claims of Boris Johnson at...

Volkswagen to rely on Qualcomm chips for automated driving...

CEO of publishing giant defends deal challenged by US gov't