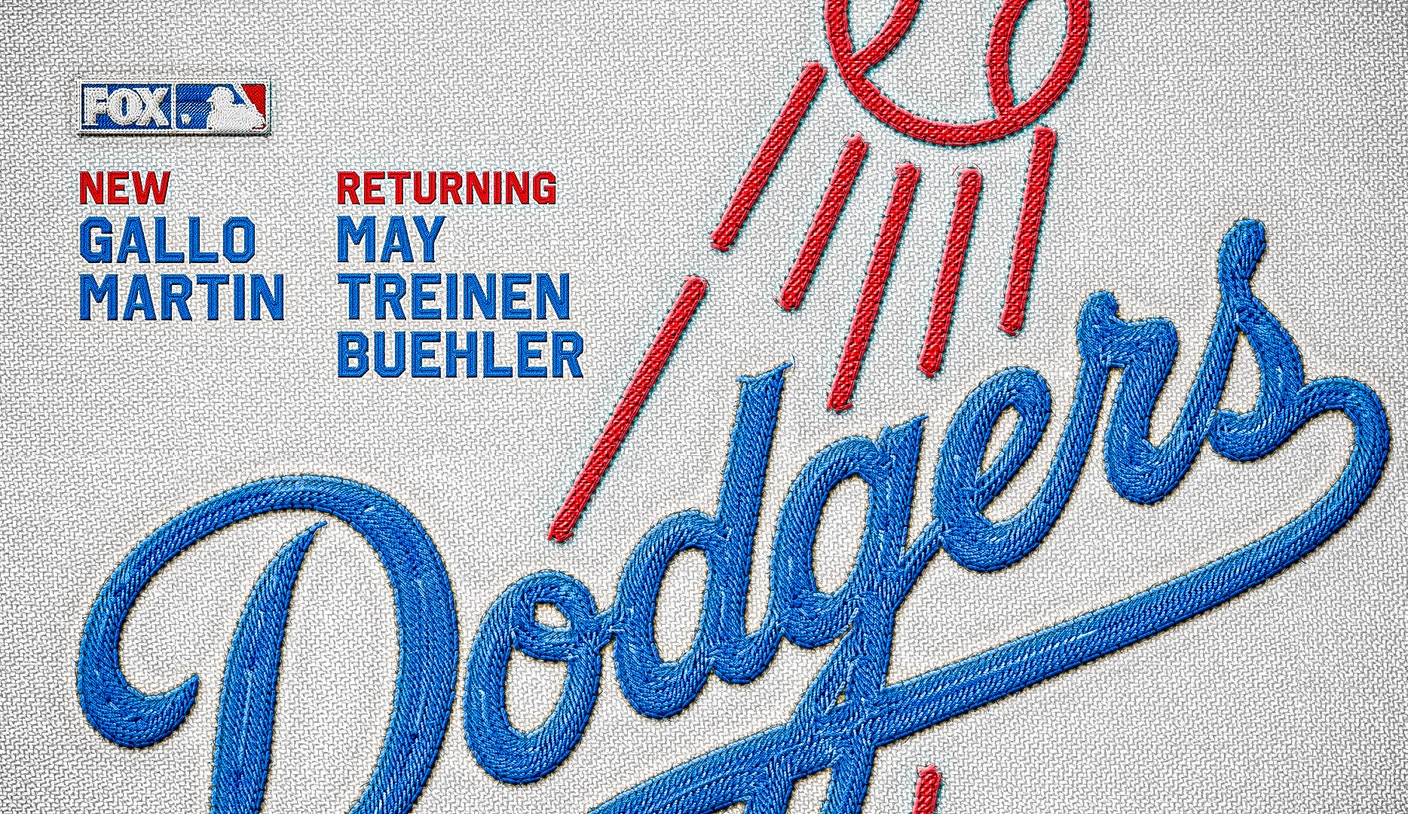 The Padres went all-in at the trade deadline, moving from playoff hopeful to legitimate World Series contender while parting with a bevy of future major-leaguers to do so. They acquired Brewers closer Josh Hader and three of the most impactful bats on the market. Drury, the third-best hitter of the group this season, introduced himself to San Diego by launching a grand slam in his first at-bat for his 21st home run of the year.

“It’s going to be really exciting,” Soto said at his introductory press conference. “I wish good luck to the other pitchers.”

The new-look Padres roll into Dodger Stadium for a three-game set starting Friday. Whatever happens, it won’t significantly alter the Dodgers’ comfortable lead atop the NL West. But might a good showing by San Diego send a message?

Many expected the Dodgers the team that acquired Rich Hill at the 2016 deadline, Yu Darvish at the 2017 deadline, Manny Machado at the 2018 deadline and Max Scherzer and Trea Turner at the 2021 deadline to make an impact acquisition. They were in the mix on Soto, being one of the few teams possessing the World Series drive and top prospects necessary to haul in that kind of talent.

“Out of respect to Washington and also to San Diego, it’s hard to get into specifics there,” Dodgers president of baseball operations Andrew Friedman said. “But I think our track record would suggest, obviously, we would’ve been aggressive in trying to figure something out.”

A year after missing out on Scherzer and Turner, the Padres wouldn’t let the Dodgers best them again for the top player on the market.

Meanwhile, L.A. largely stood pat. One of the only other times in recent years the Dodgers stayed quiet at the deadline was in 2019. They went on to set a franchise record with 106 wins that season before getting bumped in the first round by Soto’s Nationals.

This year, the Dodgers’ major addition came in the spring not the summer. That main acquisition, Freddie Freeman, did not see a need for his team to go August shopping.

“Don’t we have the best record in baseball?” Freeman asked rhetorically on Monday. “Whatever happens, happens. We’re focused on these guys in this clubhouse. We know we’ve got a really good team.”

Manager Dave Roberts was similarly adamant in the weeks leading up to the deadline that his group was already championship-caliber as constructed, noting that Friedman and the Dodgers’ baseball operations staff are “very cognizant of how the dynamic, any player, would affect the clubhouse.”

“They’re just very good at the net benefit of what you have to give up versus what you add, and I stand by we don’t need anything,” Roberts said. “But I do stand by any team can always get better on the margins.”

That is what the Dodgers did.

The Dodgers’ lone bullpen addition was Chris Martin, a strike-throwing machine who stumbled to an elevated 4.31 ERA in the season’s first half with the Cubs. Their only other major-league acquisition was Gallo, hoping a change of scenery can unlock the power threat’s upside.

“I feel good about the team that we have in place and the way that they’ve performed,” reiterated Friedman, whose team entered Thursday with an 11.5-game lead in the division.

“There’s obviously a lot of different factors that go into it, but I feel good about how aggressive we were in trying to line up on different things, the things that we ultimately did,” Friedman continued. “But, again, a lot of that stems from the special dynamic I feel like we have in place as well as the talent we have here and the talent we have returning in the next two to six weeks.”

The Dodgers are banking on that last part.

They march forward confident they have the pieces to compete in October, partially because the group they’re assembling on Aug. 4 is not the one they expect to field in two months.

Reliever Blake Treinen, who has not pitched in a game since April 14, is facing hitters again and appears close to a rehab assignment. Starter Dustin May, nearing the end of the Tommy John comeback trail, just made his third rehab appearance with Triple-A Oklahoma City.

Buehler could return sometime in September, adding to a rotation that already includes three All-Stars in Clayton Kershaw, Tyler Anderson and Tony Gonsolin as well as Julio Urías, who has a 2.30 ERA over his past 11 starts.

But the depth is already being tested. The Dodgers dealt starter Mitch White at the deadline, and Kershaw left his start Thursday after four innings with lower back pain. It’s a particularly concerning issue considering Kershaw’s history of back injuries, including earlier this season when he missed a month with SI joint inflammation.

In addition to Buehler, Treinen and May, the Dodgers have a litany of other injured pitchers the team hopes will return sometime this season a list that includes relievers Brusdar Graterol, Victor González, Tommy Kahnle and Danny Duffy.

“We feel really good about the potential for what our pitching staff could look like in October,” Friedman said. “We’re not relying on all of them coming back and being great. Some combination of that I think puts us in a really good position to have a really strong October pitching staff.”

The additions include position players, too.

Chris Taylor, out for the past month with a foot injury, homered twice Wednesday in a rehab start. Edwin Ríos, out since June 3 with a hamstring injury, began a rehab assignment a week ago.

Despite a dearth of deadline moves, the Dodgers still have more returning major-leaguers than spots available. Their move for Gallo was made for depth not desperation, “lengthening” the position player base to protect against anything unforeseen like Max Muncy’s elbow injury last October.

“We’ve talked about this a lot, my goal in every offseason is to do everything I can for us not to have to go into July with acute needs that we have to address,” Friedman said. “It is the most expensive time of the year to acquire players, and we felt really good about the team that we have in place.”

The Dodgers will spend the next two months figuring out exactly what that team looks like.

Another back-end reliever could have provided insurance in case Treinen can’t shoulder the workload. Another front-end starter could have eased concern if Buehler is not ready in time or, now, if Kershaw’s back injury sidelines him for an extended period of time.

One advantage for the Dodgers this deadline a stark contrast from last season is there’s no division race to worry about. They can bring their injured players along at a relaxed pace. Right now, they still envision a world in which Buehler has enough time to build back up as a starter. But Friedman hasn’t ruled out the possibility of Buehler helping in relief should the Dodgers slow his progression out of an abundance of caution.

“I feel very confident that we will have a really, really good 13-man pitching staff in October,” Friedman said. “Exactly how that gets deployed and roles, well take these two months to kind of determine that.”

After those two months, we’ll find out whether the Dodgers’ reinforcements can help stave off their rivals to the south.

Rowan Kavner covers the Dodgers and NL West for FOX Sports. A proud LSU alumnus, he credits his time as a sportswriter and editor at The Daily Reveille for preparing him for a career covering the NFL, NBA and MLB. Prior to joining FOX, he worked as the Dodgers editor of digital and print publications. When not at a stadium or watching sports, Rowan enjoys playing with his dog, hiking, running, golfing and reminiscing about the Mavs 2011 championship run. You can find him on Twitter at @RowanKavner

Biden meets with utility executives in push for spending...

New MacBook Pro with M2 chip could be announced...

IMF chief expects “deep recession” in Russia due to...

Miami Open: Naomi Osaka comes from a set down...

Somalia: At least six killed in Mogadishu attack near...

Safari is now the second browser to hit one...

Biden shouldn’t trust Kamala, he should ‘sleep with one...

US President Joe Biden Tests Positive for Covid With...

Gianno Caldwell on murder of brother in Chicago: ‘My...

A GOP-controlled Senate could grind Biden’s judicial nominations to...

Shoppers spent less for second month in a row,...

Ukrainian civilians in “desperate need” of help as Russian...

Full transcript of “Face the Nation” on April 3,...

You Should Still Test Yourself for Covid. Here’ When

How I Create Magic Through Accessibility in Attractions at...

Nintendo Switch controllers and accessories are going cheap for...

Felix passes the baton to next generation in emotional...

Why experts say monkeypox is ‘very different’ from COVID

Police confirm gunshots were fired at Mall of America in Minnesota, scene...