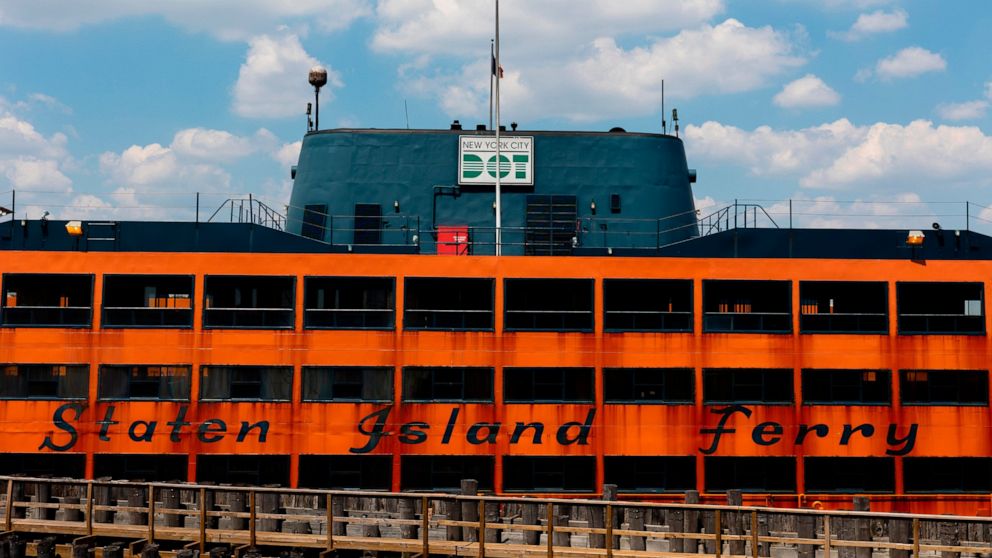 NEW YORK — It has been rough sailing this summer for the Staten Island Ferry, yet another iconic New York City institution being buffeted by ripples of the coronavirus pandemic.

All summer long, service on the big, orange boats that carry commuters and sightseeing tourists has been periodically curtailed due to staffing shortages.

The disruptions reached a peak Wednesday, when the city was only able to run ferries once per hour, rather than the usual of every 15 minutes. The city’s fleet of smaller, river-hopping ferries was brought in to help get people across New York Harbor.

City officials had blamed earlier service reductions in July on too many workers having COVID-19. On Wednesday, Mayor Eric Adams said a significant share of the workforce hadn’t reported to work and suggested it was related to a labor dispute.

The union that represents captains, engineers and other crew members, disputed the mayors characterization of the worker shortage as being the result of a sick-out. Nor was COVID-19 predominantly to blame, they said.

The real trouble is that the ferry’s staff has been shrinking for years, partly because workers haven’t gotten any raises since their contract expired more than a decade ago, said Roland Rexha, secretary treasurer of the Marine Engineers Beneficial Association.

The scheduling created the short-staffing. No one walked off their jobs. We were raising the alarm on this three years ago and the public is only hearing about it now, Rexha said, noting that service reductions had been happening for months before the situation came to a head Wednesday.

These days, when even a few workers do need to miss time because of COVID-19, there are few colleagues who can fill in, union officials have said.

Service returned to more normal levels Thursday but the union predicted future problems unless a new contract is reached after more than 10 years of failed negotiations.

That would be bad news for commuters like Chris McKeon, a social worker who got up earlier than usual Thursday to catch his ferry to Manhattan because of the disruptions. On Wednesday, he had to wait 90 minutes for a ferry after just missing one of the few trips being run.

Its horrible. Staff is being overworked without a contract for about 11 years, he said, echoing the unions complaints.

The free ferry, which passes the Statue of Liberty on its journey between Staten Island and Manhattan, carried more than 20 million passengers annually in pre-pandemic times.

Like other forms of New York City transportation such as the subways and the taxi fleet it has yet to recover from the pandemic, as many workers continue to stay away from Manhattan’s office towers some or all days of the week.

Rexha said stricter regulations for captains implemented after a 2003 ferry accident have made it harder to obtain licenses. That crash killed 11 people after a boat crashed at full speed into a maintenance pier.

A smaller pool of potential applicants and the lure of making more money from private carriers such as global shippers has contributed to the current shortage, according to Rexha.

Its a very limited pool of people who can do this type of work, he said. And you cant do it if you can’t afford to live in New York City, especially if the outside industry is paying wages that are way outside that range.

The mayor, a Democrat, reminded reporters Thursday that the contract dispute dated back two administrations ago, to when Michael Bloomberg was mayor, but he vowed to tackle the problem.

Ive been mayor for seven months. This is something I inherited. It was brought to my attention yesterday, and we are going to try to resolve the issues so that our Staten Islanders are not denied their services, he said. Airlines struggling with shortages want to recruit more diverse pilots. This HBCU could be a solution.

Commonwealth Games: Birmingham 2022 to be Scotland’s best Games outside Glasgow

San Francisco apologizes for history of racism, discrimination against...

Woman who falsely accused Black teen of stealing her...

How to Beat the Highest Price Hikes On Food,...

What could be Florida Gov. DeSantis’ undoing on the...

Ukraine round-up: What would Zelensky accept for peace and...

Biden to announce appointees to Cancer Panel, part of...

As baby formula shortage grows, one company is trying...

Opinion | The Supreme Court Has Too Much Power...

Ministry that once nourished Duggar family’s faith falls from...

Police: No victim found in shooting at Mall of America