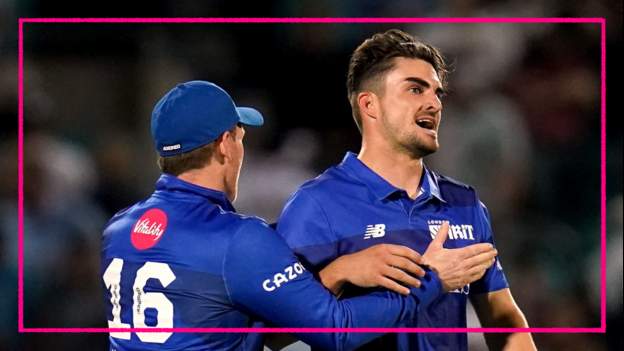 It became the Hundred thriller no-one at The Oval had expected.

As it transpired, Invincibles still lost but their stubborn desire to take it down to the last ball provided a finish and an occasion to remember.

“The atmosphere at the end was up there with the best I have been a part of,” said Spirit bowler and Australia international Nathan Ellis, while England’s recently-retired World Cup-winning captain Eoin Morgan enthused it was “as close to an international game as I’ve ever felt in a domestic game”.

As balls sailed into the stands, cheers from a previously calm sold-out crowd grew louder.

Game on? You bet.

Wide after wide and no-ball after no-ball was bowled by Spirit’s bowlers as things got tense and home supporters leapt to their feet to celebrate.

With one ball to go, and a six needed for the hosts to pull off an extraordinary win, a huge roar went around the ground as almost everyone stood up.

One young girl, sat below the press box, had her hands on her head – her face a picture of disbelief.

In the end, West Indies international all-rounder Sunil Narine only managed a leg-bye when he needed a boundary.

The Invincibles had eventually been beaten by their city rivals, but 22,284 fans applauded, cheered and left thoroughly entertained.

The most remarkable passage in the match came when, needing 37 from the last 10 balls having earlier been out of the game at 12-4, the Invincibles scored 20 from the next five.

There was a six by Narine and a four from Danny Briggs, but Spirit bowler Chris Wood also bowled a no-ball and three wides.

The Spirit looked rattled, even more so when Briggs started the next ball with back-to-back fours. However, 25-year-old Spirit all-rounder Jordan Thompson held his nerve, despite bowling one wide of his own.

“It did feel as close to an international game as I’ve ever felt in a domestic game, maybe other than India when you have that pressure as an overseas player,” said Spirit captain Morgan, who has been reunited with ex-England coach Trevor Bayliss at the Lord’s-based team.

“It’s amazing: young Jordan Thompson, being exposed to that, it will do wonders for him and it’s great for English cricket to have players getting used to playing in these pressure situations.”

Morgan was his typical calm self in the closing moments, speaking to his bowlers and calming the nerves.

Asked afterwards how nervous he felt, Ellis said “very”, but added: “Morgs is really good in these situations.

“He is very experienced and as a bowler you have his calming influence telling you to calm down and slow down.”

For the Invincibles, Briggs was almost the unlikely hero. He is a spin bowler not a batter and came in at number nine in the order.

He ended up on 29 not out from 11 balls, a hit away from victory. In modern cricket, we are beginning to expect the unexpected – even though it sometimes doesn’t happen.

“It was good fun,” Briggs said. “Sunil Narine at the other end keeps you calm and the crowd were up.

“You can’t complain. It was one of those we could have lost by a long way. We got it close.”

The Invincibles did get it close – far closer than anyone expected.

There are valid, big-picture concerns around The Hundred – the fact many fans of county cricket feel ignored and the added pressure to the schedules to name two.

But in the closing moments those were not on the minds of anyone in the ground.

It was a thrilling finale of the best kind – one you did not see coming.

7 states holding primaries, some key for control of...

Credit Suisse Ousts Culture-Fixing Boss After His Own Scandal

The Points Guy Files Motion to Dismiss in American...

One ticket in Illinois won the second-largest Mega Millions...

What Would an Iran Deal Mean for Oil Markets?

Nepal has nearly tripled its wild tiger population since...

Transcript: This Is What Happened to the Meme Stock...

No one likes Mozilla accepting donations in cryptocurrency

The Long Shadow of the ‘Nigerian Prince’ Scam

US House passes Crown Act which would end hair...

Social media platforms on the defensive as Russian-based disinformation...

Citigroup Boosts Pay for U.S. Junior Bankers After a...

Oxford vaccine and research centre worth £200m could be...

Heatwave: Living at 40C in Abuja, Delhi, Madrid and...

LAPD officer killed in mob ‘training’ with other cops,...

No way out as Iraq’s dangerous post-election impasse deepens

Boris Johnson says ‘Sizewell C is certainly on the...

Sinema Praised for ‘Spine of Steel’ as GOP Hopes...

Nissan signals the end of the road for Datsun...

Stephen Innes on the Markets (Radio)

Police: No victim found in shooting at Mall of America

Police confirm gunshots were fired at Mall of America in Minnesota, scene...