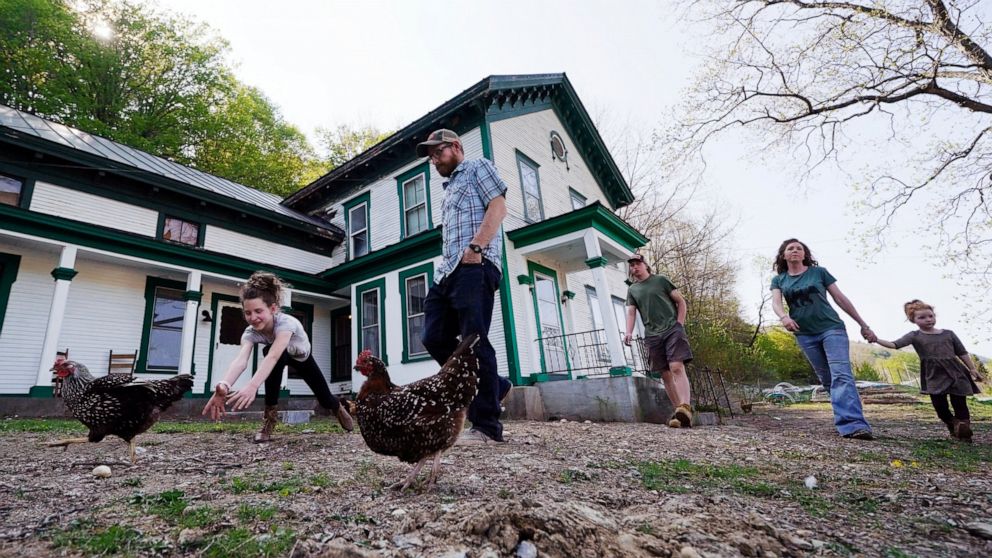 PROCTOR, Vt. — Weeks after surviving one of the deadliest and most destructive wildfires in California history, the Holden family just wanted a new home.

The family of seven couldn’t find anything nearby to replace their house reduced to ashes in the 2018 Paradise fire. It proved too daunting to rebuild in a town that looked more like a deserted war zone than the tight-knit community they loved.

So they started looking farther afield for a place that, unlike California, did not seem under constant threat from wildfires, droughts and earthquakes.

When you are left with nothing, you start thinking I dont want to go through anything like this again, Ellie Holden said.

EDITORS NOTE: This is part of an ongoing series exploring the lives of people around the world who have been forced to move because of rising seas, drought, searing temperatures and other things caused or exacerbated by climate change.

After two years renting a house in upstate New York, the family found its way to Proctor, Vermont a town of fewer than 2,000 near the Green Mountain National Forest that was once known as the marble capital of the world. The couple, both 40, loved the small town feel and open space that reminded them of Paradise.

“I felt excited to go to a new place and be out of the fire place,” said 10-year-old Soraya Holden, one of five children, as she walked alongside the family’s herd of goats behind an old dairy barn. She ticked off the area’s perks rock climbing, gymnastics and a climate that’s not burning hot.

Families are increasingly factoring climate into a move as temperatures and climate-induced disasters rise. Several reports earlier this year highlighted the trend. One found that 2021 was the deadliest year in the contiguous U.S. since 2011 with 688 people dying in 20 climate and weather disasters with a combined cost of at least $145 billion.

Scientists warn it’s hard to blame climate change for any single event. But with disasters piling up, some residents in hard hit areas are concluding that staying in the line of fire is no longer an option.

I think that the interest in climate havens is fundamentally about hope wanting to have a safe place to escape the worst impacts of climate change, said Nicholas Rajkovich, an associate professor in the School of Architecture and Planning at the University at Buffalo. But regions, counties and cities need to work to plan for the population change, combined with the impacts of climate change, that they will see.

While little data exists documenting this phenomenon, there have been reports of U.S. families heading to cooler destinations not touched dramatically by climate change. Communities close to Canada such as Cincinnati, Duluth, Minnesota, and Buffalo, New York are popular landing spots. Another Paradise family also chose Vermont.

The Holdens lost everything in the Paradise fire, joining thousands who never returned. The 2018 blaze in the Sierra Nevada foothills destroyed 19,000 structures and killed 85 people. Only several thousand of the 27,000 residents chose to remain and rebuild.

After the family barely escaped the flames in cars, they lived in their trailer on a friend’s property, then in their church parking lot. When they returned to their home five months later, all that remained was a pile of ash and the chimney,” James Holden said.

Every landmark that you know is gone. That was the thing that was strange, he said. Coming into town, that is when you realize the devastation … Ninety-five percent of the town burned. Every store … The used car dealer. It was a lot full of burned hulks now.

As we are going through the ash and we are finding these things. it makes it more beautiful because youve just lost everything that was your old life, Ellie Holden said. It’s this piece of evidence that we had this life. We had a house. We had these things. We were happy.”

Initially, the family wasn’t ready to give up on Paradise. All the children, now 4 to 15 years old, were born there, and Ellen Holden’s grandparents had lived there.

Taking a this fire is not going to destroy us attitude, James Holden moved the trailer from the church parking lot back to the family’s two-thirds of an acre of charred land. Before the fire, they had fruit trees, a huge vegetable garden and chickens.

For three months, they relied on rain water and when drought hit, bought a water tank and trucked in water for drinking, cooking and bathing. James Holden set up a solar power system for electricity. For internet, they used cell phone hot spots.

We were living in ashes. The kids were filthy constantly from that black ash, Ellie Holden said. We didnt have any community left. All our friends had either moved to (nearby) Chico or … somewhere across the country. There was nothing left that we loved. There were no trees, no forest.”

Then, the couple started considering Vermont. They previously had toyed with farming in the East. But the idea really took hold after the fire.

James Holden’s research indicated Vermont wasn’t at great risk of tornadoes, wildfires or hurricanes and seemed more hospitable from a climate perspective. It was, according to a climate assessment last year from University of Vermont scientists, getting hotter and wetter. But it was nothing like California.

Before buying the farm, the family watched YouTube videos of Tropical Storm Irene’s devastation a decade ago. They talked to insurance agents and took solace that their home had not been flooded and that Proctor and nearby Rutland weren’t wiped out. The water only reached the two-lane road running alongside their property, not the house.

Sure, anything can happen anywhere you live. Your house can burn down from an electric fire. Anything can happen, Ellie Holden said. But we got to the point where we wanted to mitigate risk that we could.

Their new home hasn’t come without challenges. The dairy farm hasn’t operated since the 1990s and needs lots of work. The skyrocketing cost of construction materials has slowed renovations. Uninsulated parts of the house can fall into the single digits in winter.

But they feel blessed they found a new life. They have a small herd of goats to clear away overgrown vegetation and sell eggs from their chickens. They also produce cut flowers for bouquets and heirloom vegetables from their expanding garden. Soon, they hope to make maple syrup and eventually build guest cabins in the woods.

The hardest thing about the last three years has been our loss of that feeling of home, the loss of our community, Ellie Holden said. We can finally say since moving to Proctor that weve found our home and have been welcomed into our new community.

The Risks (and Rewards) of Metaverse Mortgages

US Coast Guard rescues 3 US sailors in Atlantic...

Manchin says he won’t vote to ‘eliminate or weaken...

German president set to be elected for another term

Inside a Shanghai mass quarantine center: No showers, lights...

On The Money — House votes to limit trade ties...

Raspberry Pi is now selling its products direct, but...

Tucker: No race politics is better than others –...

Tulsi Gabbard warns where escalation with Russia could lead...

Covidtests.gov is off to a strong start but big...

Personal Wealth: Are We Going Into a Recession? Advice...

I made fudgy brownies in an air fryer, and...

We could see a new Apple HomePod before the...

UAW boosts strike pay for workers amid spate of...

US markets see worst losses since 2020 after rate...