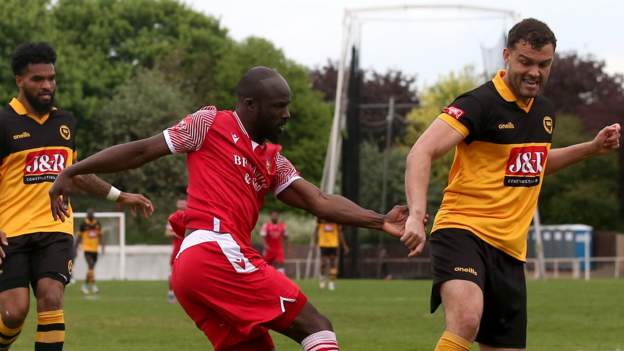 The Isthmian League has offered clubs the chance to bring forward kick-off times to save on energy costs.

A total of 82 clubs in the Greater London, East and South East areas play in the league’s four divisions.

The new season starts on 13 August, although they are involved in FA Cup preliminary round ties this weekend.

“We want to make sure that our clubs are aware of the rules. If the two of them agree, they can bring forward the kick-off,” said chairman Nick Robinson.

“In March, I went to a ground when things were just starting to go up and the clubs said to me ‘our energy bills have gone up this amount – can you help us, can we kick off early?’

“I said not this season but we will work it for next season. I haven’t forgotten it and everything has got worse since then.”

The League expects the issue to become more acute later in the year when floodlights are needed for games – and is also aware that high fuel costs are also having an impact as clubs travel to away fixtures.

“We’ve done some work as to how much floodlights actually cost, and we know in cup competitions we allow £75 to £85 for floodlights, but is that enough? It used to be,” Robinson told the BBC Non-League Show.

“What it’s going to be on the new energy costings, we don’t know – but certainly for league matches if clubs can go to a 12:30 kick-off or even if they just come forward an hour or so, they can save themselves some money.”

He is encouraging clubs to be proactive, perhaps showing Premier League games in clubhouses to encourage supporters to come to their grounds early.

Kicking off early would also allow them to live stream games and avoid a 14:15 to 17:15 blackout imposed by the Football Association.

“There’s a lot of thinking going on at clubs these days, it’s not just a matter of getting 16 players, a manager and a trainer and turning up at the ground,” Robinson added. Erdoğan: Ukraine and Russia nearing ‘consensus’ on 4 of...

Review: A fun summer mystery with the ‘Bob’s Burgers’...

Protecting journalists on the ground in Ukraine

The Crisis Core remaster is pivotal for the Final...

Ukrainian pilots arrive in Poland to pick up donated...

Officials: Murderer on the run who escaped from a...

Cort Nielsen and Clarke out of Tour de France...

Hangzhou Asian Games to begin on Sept. 23 next...

How Blocking Ambassador Bridge Shut Down a Quarter of...

Dog Escapes Kennel, Makes His Own Way Home While...

Coalition kicks off campaign to engage Black voters ahead...

Alexander 23’s Gentle Musings On The Aftershock Of Love

Olympic champ Mo Farah reveals he was trafficked to...

Royal family scandal, COVID are are ‘going to take...

Staten Island Amazon workers to vote on unionization next...

Mario Kart 9 is long overdue, but it shouldn’t...

How to declutter and get organized in the new...

Vatican closes London property sale at a loss after...