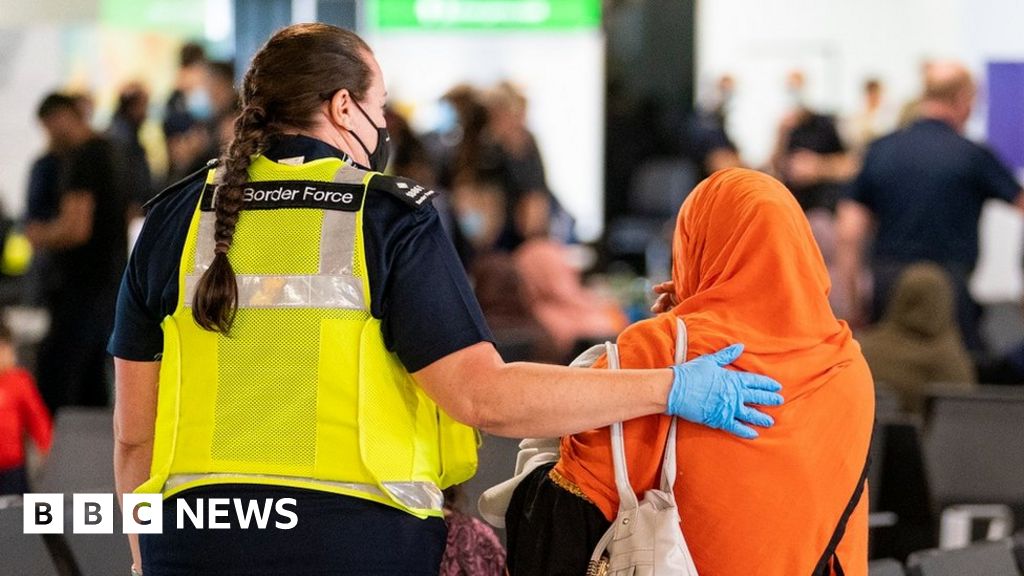 The refugees minister has appealed to councils to help house 10,500 Afghans currently living in UK hotels at a cost to the taxpayer of £1m a day.

Lord Harrington told councils the government had fewer than 100 properties available in June, but expects 500 Afghan arrivals each month.

Several Afghans said living in hotels had left them unable to settle.

“I know this is costing the British people but for what?” one refugee told BBC Two’s Newsnight.

Mohammad, who is in his 40s, said: “I want to settle and integrate but how can I when we are living in a hotel for months and months? I can’t start my life properly.”

He worked alongside the British Army in Afghanistan and came to the UK with his wife and two young children after Afghanistan fell to the Taliban in August last year.

He says his wife of 20 years is struggling after sharing one hotel room between the four of them since September.

“I don’t blame her [for struggling] because I know the situation. She is in that room for one year with two kids. These are kids, and she is depressed, so things are not good”, he said.

Afghan families are being placed in temporary hotels until social housing can be found, according to the Local Government Association.

Once housing is found, the government gives the relevant council more than £20,000 per person over three years to help them resettle and integrate in the local community.

It is up to councils to find accommodation, but many already face a dwindling housing stock.

The Home Office said homes have already been found for more than 7,000 Afghan evacuees.

But in his letter, seen by the BBC and dated 27 June, Lord Harrington said they needed another 2,000 properties to house the remaining 10,500 people.

A month later the government put the number of Afghans needing accommodation at 9,500.

Newsnight has been told that the Home Office is negotiating with some local authorities to extend the Afghan hotel scheme into next year, which would mean some residents living there for longer.

It is a difficult prospect for Afghans like Munza. She has been in a hotel in the north of England with her parents and younger brother for six months.

They are unable to cook in the hotel – and she says they all feel “so down”.

“Our hotels also are in a very isolated place and far away from the town or any shops with basic necessity items. And with very limited bus services in this area, it makes it even more difficult and frustrating for people based here for now.”

He said the government was reaching out to landlords, property developers, and the wider private rented sector, including property listing website Rightmove, to encourage further offers of properties.

It is also working with education establishments on converting properties to be used as long-term accommodation, he wrote.

The Home Office said it faced a “challenge” of insufficient local housing accommodation in the UK – “not just for Afghans and those in need of protection but also British citizens who are also on a waiting list for homes”.

“While hotels do not provide a long-term solution, they do offer safe, secure and clean accommodation,” the Home Office added in its statement.

Ukraine Makes an In-Person Plea to NATO for More...

Why Good Arguments Are Essential to Good Democracies (Podcast)

Sinovac Is 38% Effective In Shielding Kids From Covid,...

Gateway on its merry way

AMD just gave us our fist glimpse of next-gen...

Demi Lovato is back, and this time she’s angry

Conor Lamb’s Pennsylvania Senate campaign criticized as ‘one of...

Energy firms call for green levies on bills to...

Woman charged with setting fire at Massachusetts apartment that...

‘My Dad Is a Republican Politician, I Stopped Talking...

MotoGP: Marc Marquez to race at Grand Prix of...

Two hospitalized after helicopter crashes into ocean near Miami...

Gazprom Tries to Reassure Europe Clients They Can Still...

Malcolm X’s daughter calls for federal inquiry into his...

What it’s like inside Moscow amid Ukraine war: Reporter’s...

Hunterston B nuclear power plant to close down after...