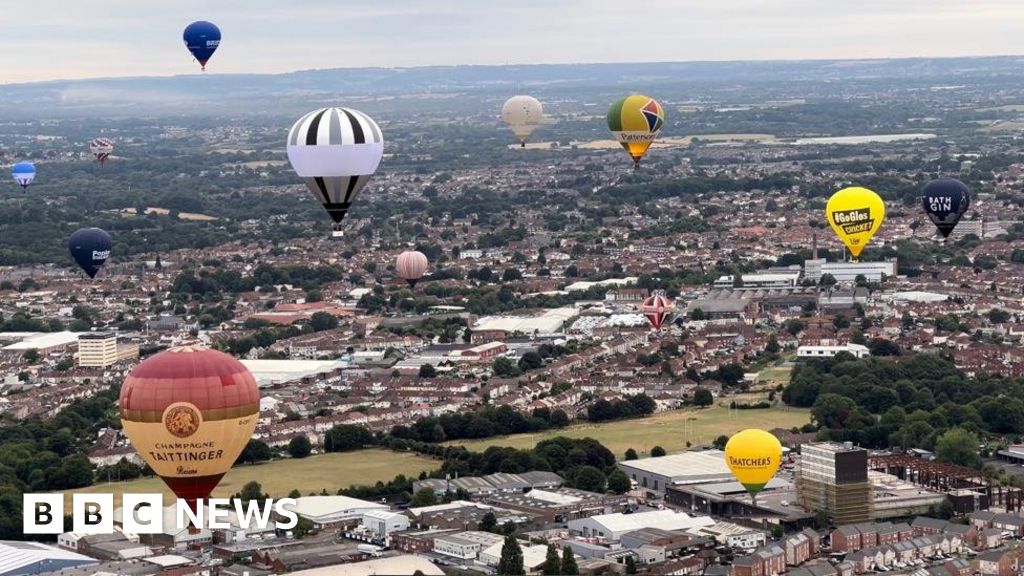 About 30 hot air balloons have taken to the skies of Bristol in a spectacular display.

Balloons took off from Vassells Park in Fishponds and Pomphrey Hill in Emerson’s Green at 06.45 BST.

Monday’s display was ahead of the Bristol Balloon Fiesta, which returns to Ashton Court Estate next week.

The fiesta is Europe’s largest ballooning event and is back after a three-year break due to the Covid pandemic.

Image caption, Balloons taking part in pre-flights ahead of the Bristol Balloon Fiesta

The two launch sites used this morning were among the 1,000 nominations organisers received for the community launches. A number of the hot air balloons landed in Hengrove.

The fiesta itself starts on Thursday, 11 August and runs until Sunday, 14 August.

It will involve more than 100 hot air balloons taking off at dawn and dusk, as well as family entertainment throughout the four days including aerial displays, fairground rides, food stalls and bars, balloon tethering and demonstrations, model aircraft displays and a live music stage.

Organisers have already confirmed that shuttle buses will not be available during the fiesta due to a national shortage of drivers. Fiesta operations director Ben Hardy said viable alternatives to the shuttle bus service “have been exhausted”.

Image caption, About 30 balloons took part in pre-flights over Bristol

Image caption, Take off locations were nominated by locals

Image caption, A series of hot air balloons took off across Bristol World Cup Japan vs Croatia: Interest is so High...

The bottlenecks on alternative routes to export Ukrainian grain

Americans Are Showing Inflation Fatigue, and Some Companies See...

Child care is expensive everywhere. But this country tops...

All On The Board: ‘Our messages have saved lives’

How countries are responding to the cost of living

Texas man gets 45 years for killing neighbor amid...

As LeBron James turns 38, his historic brilliance is...

Pentagon spokesman chokes up while talking about Ukraine

What are Twitter bots, and why is Elon Musk...

A new class of Legislators emerges

Anne Robinson, on having an abortion in her twenties

Why a bookstore owner is working to make Harriet...

Wordle is now integrated in The New York Times...

Formula 1: Have the new rules worked?

Death toll climbs to 25, many missing in Venezuela...