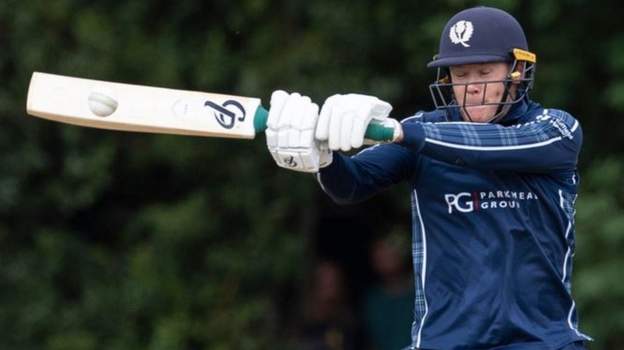 An unbeaten century from Mark Chapman steered New Zealand to a seven-wicket ODI victory over Scotland in Edinburgh.

With Michael Leask making a rapid 85 and Matthew Cross 53, Scotland were all out for 306 in their final over.

Leask also took two wickets, with the Kiwis on 132-3 at the end of the 24th over at The Grange.

But Chapman, who finished on 101, and Daryl Mitchell, not out on 74, then shared a partnership of 175 to take the game away from the hosts.

Having fallen to two bruising Twenty20 defeats at the same venue last week, Scotland recovered some pride in their first ODI against full-member opposition since 2019.

Kyle Coetzer (22) and Michael Jones (36) put on 46 for the first wicket although the hosts looked to be in deep trouble at 107-5 following the loss of Chris Greaves in the 25th over.

However, by the time drinks were served 10 overs later, wicketkeeper Cross and all-rounder Leask had added another 82 runs.

Having reached his 50 in accomplished style, Cross will have been disappointed to feather the ball into the gloves of his opposite number Dane Cleaver.

Leask continued clobbering the ball all over the tiny ground and had rattled off four sixes and nine fours by the time his swashbuckling innings came to an end with one last hoick gathered by Martin Guptill near the ropes.

Leask thoroughly enjoyed his 80 minutes in middle and served up his 85 in just 55 balls.

Mark Watt (31) and Safyaan Sharif (28) kept the scoreboard ticking over and the crowd roaring with approval before Chris Sole holed out two balls shy of the 50 overs.

In reply, New Zealand started steadily, with the opening pair of Martin Guptill and Finn Allen putting on 78 for the first wicket.

Scotland’s seamers lacked luck – Sole repeatedly beat the outside edge, and Sharif saw one delivery roll back onto the stumps without dislodging the bails.

It was a stunning piece of fielding that eventually brought about the first wicket.

Allen (50) charged the bowling of Hamza Tahir, looking to hit down the ground, but dragged the shot towards cow corner, where Calum Macleod took a wonderful diving catch on the run.

Guptill and Cleaver rebuilt nicely, before the introduction of Leask, Scotland’s man of the moment, saw them both depart in quick succession.

First, he trapped Guptill lbw for 47, before he spun one back and forced Cleaver (32) to chop on.

The visitors were without some of their A-listers but Chapman, dropped twice near the ropes, demonstrated the strength in depth they have when he cut loose in the late afternoon sunshine, smashing seven sixes to go with his six fours.

Mitchell, who politely made sure his partner was on strike for the closing deliveries, was not quite as explosive but played a key role in turning a potentially tricky situation into a win with 25 balls to spare.

Scotland head coach Shane Burger: “It’s a week of missed opportunities, where we got ourselves in positions to win games, but we saw we’re a little bit short in some departments.

“We lost the big moments again. They showed that one big partnership is the difference. Their top order taking responsibility, batting through and getting a hundred. Leasky tried, and I thought his knock was very special. The highlight for me is getting three hundred runs, and I think the crowd will have been entertained in the three games against the Kiwis.

“We’ve spoken a lot about resilience. Even if the chips are down, I know that this group of players is willing to put their hands up.” USS Clamagore submarine will be destroyed and recycled, museum...

Sir Keir Starmer: Labour will not be influenced by...

Shaheen says she has ‘agreement in principle’ with Collins...

The Economics of Oil Sanctions

‘We need to help WSL referees by making them...

Halo Infinite delays worth it as game had the...

Super Bowl 2022 performances: What to know

Eye Opener: Fourth of July travel back in full...

Uvalde Is The West

The Papers: ‘Grass up a granny’ and hosepipe ban...

The woman declared stateless in India, UK and Uganda

Biden’s ‘failed policies’ forcing states to ‘step up’ at...

Balance of Power: War Not Going the Way Putin...

UK’s Johnson: Next few days ‘most dangerous’ in Russia,...