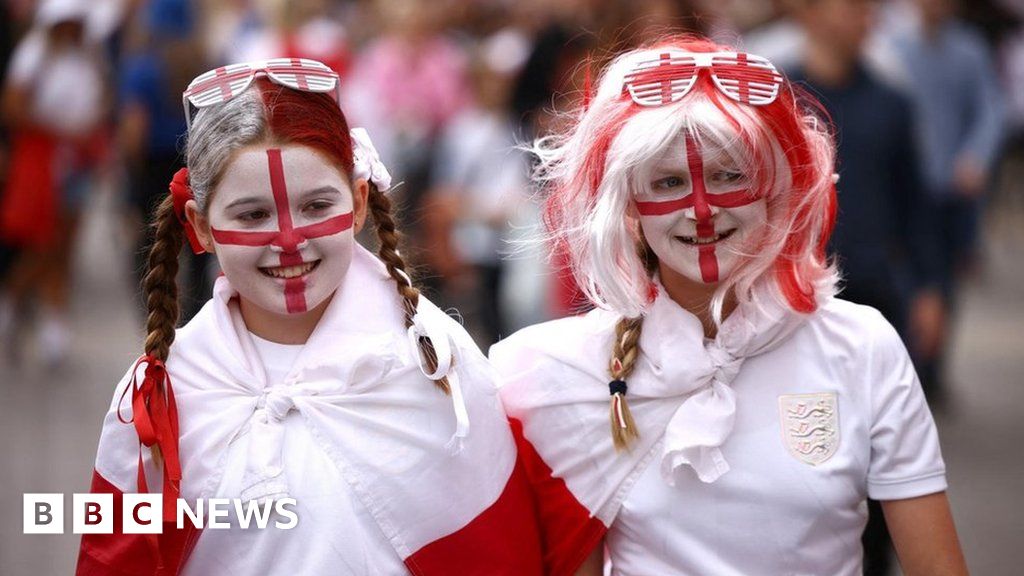 Thousands of football fans are arriving at Wembley Stadium, ready to roar the Women’s England football team to victory.

About 90,000 people are expected to fill the stadium to see them take on Germany, who have already claimed the Euros crown eight times.

BBC Sport’s Emma Sanders said the area around the stadium was packed with fans draped in England flags.

“TV cameras are floating about, while Uefa volunteers are taking pictures of families in front of the Wembley arch,” she said.

“There are plenty of former Lionesses too – ex-goalkeepers Siobhan Chamberlain and Karen Bardsley and former winger Sue Smith are among those speaking with fans.

“My hotel was also packed with supporters all wearing their England shirts to breakfast. I spotted a young German fan last night too.”

If the Lionesses win, it will be the first major tournament title for an England team since 1966.

They have won only two of 27 matches against Germany but triumphed in their most recent meeting, claiming a 3-1 victory in February.

Emma Hayes, Chelsea women manager, told BBC Radio 5 Live the fans will have a huge impact on the players.

“Imagine being Georgia Stanway and thinking ‘where am I going to get my energy from?’

“Well, there’s 90,000 people to hep you with that. That’s the biggest single difference.” Moscow Exchange to Expand Limited Trading to All Stocks...

The Morning After: Apple may be testing USB-C iPhones

Herschel Walker defends use of ‘honorary’ police badge in...

How Long Is New Tales from the Borderlands?

The Logitech G Cloud and Shadow are a match...

Apple Watch 8 could be joined by two more...

Jabeur vows to come back swinging after crushing U.S....

Treacherous heat paired with high humidity is likely to...

Who is Donal Logue? Meet ‘The Equalizer’ Season 3...

The best Prime Day deals for Amazon devices that...

US Jobs at Cruising Speed May Keep Up Pressure...

NFL Week 3 streaming guide: How to watch the...

Opinion | Clarence Thomas Should Be Used to the...

Bengals vs Titans live stream: how to watch NFL...

What we bought: The Fujifilm X-T30 is the perfect...

Istanbul governor says in a tweet there are dead...

The last staff have left the Iranian embassy in...

Rep. Byron Donalds: It Shouldn’t Be Taking This Long...

The Taylor Swift Chaos Is a Reckoning for Ticketmaster

Iraq cleric's followers camped out in parliament for 2nd day