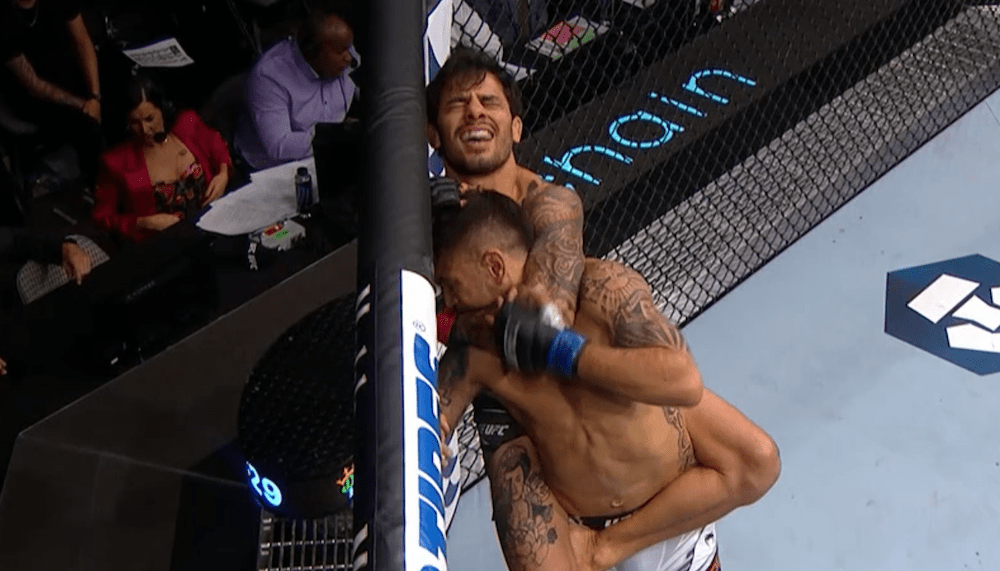 Alexandre Pantoja further strengthened his case for a title shot Saturday when he defeated Alex Perez at UFC 277.

The Brazilian used his elite jiu-jitsu to get the better of Perez and get his hand raised in the main card bout at American Airlines Center in Dallas.

There was no time wasted for Pantoja and Perez to go after it. They charged each other at the opening bell and exchanged wild punches. That opened an opportunity for Pantoja to bounce on the back of Perez, though, and he immediately got a standing body triangle and went to work. He locked a crushing face lock on Perez, who was left with no choice to tap out just 91 seconds after the fight began.

With the win, Pantoja now is 4-1 in his past five fights dating back to December 2019. He’s rapidly closing in on his first UFC title opportunity, but will remain in the queue for champion Deiveson Figueiredo behind the winner of Saturday’s interim flyweight title bout between Brandon Moreno and Kai Kara-France.

“I’m going to prove it however many times I need to,” Pantoja said in his post-fight interview with Joe Rogan. “I know that I’m ready for the title. Brandon Moreno and Kai Kara-France, I beat them both in two weeks (on ‘The Ultimate Fighter’). The champ is right here.”

For more on the card, visit MMA Junkie’s event hub for UFC 277. Former MoviePass execs are being sued by the SEC...

‘She Wishes She Could Just Be A Little Girl’

Trump’s Save America PAC finds itself in DOJ’s crosshairs

Your flights could soon benefit from high-speed internet, courtesy...

First Look at the New Grand Finale in the...

COVID-19 health emergency could be over this year, WHO...

The latest Sims 4 expansion reduced me to tears

Wall Street: The U.S. housing market to see the...

The labor force is smaller than you think and...

Crypto is as useful as a ‘pet rock,’ according...

After ‘taking punch after punch,’ more than half of...

Parkland shooter’s prosecutor had bloody facts on his side

Mediobanca wants women to take 40% of its senior...

Zelensky on ‘Political Tightrope’ Over Russia Compromises on Donbas,...

Sprite to retire green plastic bottles in favor of...

A road trip to sell America on the Afghan...

Crypto crisis continues. Here’s the latest on the FTX...

Peter Kay tour: Hundreds of thousands struggle to get...

Newcastle hold on to stun Gloucester