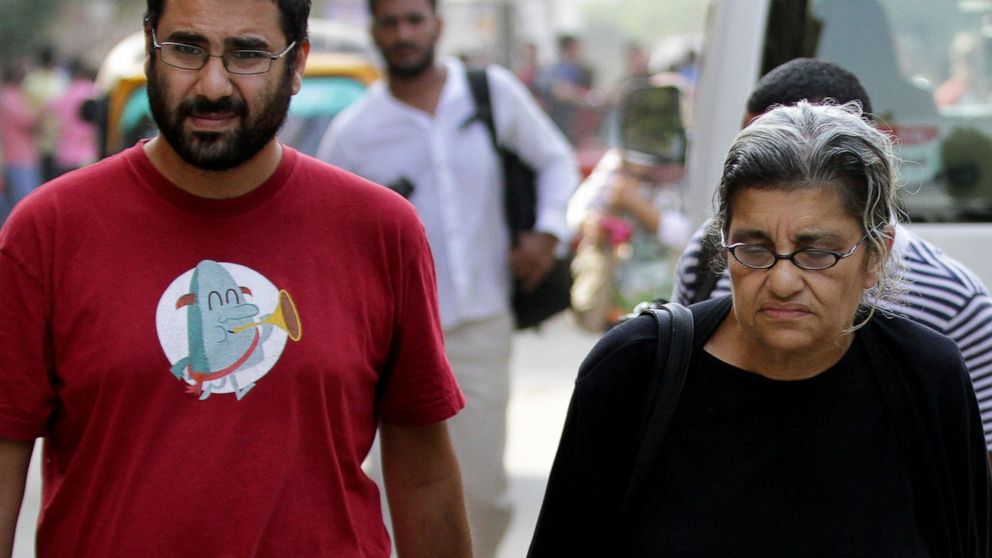 CAIRO — Egypt’s prosecutors are refuting allegations of torture and ill-treatment leveled by prominent jailed activist, Alaa Abdel-Fattah, arguing he is in good condition years after the accusations were made.

For nearly ten days, Abdel-Fattah’s family say they have not heard from him. They say they’ve been told by prison officials that he is refusing to meet with them. Amnesty International is urging Egyptian authorities to allow the family access to the 40-year-old programmer and father, who is serving a five-year sentence on charges related to his activism.

He was sentenced in December to five years on charges of spreading false news, a charge often used to sentence opposition and pro-democracy activists in Egypt. His family say he has been on hunger strike since April to protest his detention and have voiced serious concerns for his health.

His imprisonment has come to symbolize the broad crackdown on dissent that has targeted not only Muslim Brotherhood figures, but also secular activists, economists, writers and others under the government of President Abdel-Fattah el-Sissi.

In a statement released late Thursday, the Public Prosecution Office said that a senior prosecutor was dispatched on Wednesday to Wadi el-Naturn prison to investigate nearly three-year-old claims that he was beaten and denied basic rights. Abdel-Fattah’s complaints stem from his detention at the Tora prison complex.

After examining Abdel-Fattah, the prosecutor concluded that he showed no marks of torture, the prosecution’s statement said.

The inmate is in good health and a doctor examines him regularly along with other inmates. He never had any health complaint, read the statement.

His sister, Mona Seif, wrote on Twitter that the prosecutor’s statement provides the family with proof that her brother is alive.

That is the most important update now, she said.

His aunt, award winning novelist Ahdaf Soueif, cast doubt on the seriousness of the prosecutors investigation.

They are examining Alaa and concluding that they cannot see any signs of beatings that actually took place two years and nine months ago, she wrote on Twitter.

Abdel-Fattah, an outspoken dissident, rose to prominence during the 2011 pro-democracy uprisings that toppled longtime autocrat Hosni Mubarak. Abdel-Fattah has since spent most of the past decade behind bars.

His family say they have filed multiple complaints with Egypts prosecutors since 2019 about him being denied access to books, exercise time outside his cell, regular visits and proper medical care. In May, authorities transferred him from Tora prison to the newly-inaugurated Wadi el-Natrun prison, located about 100 kilometers (62 miles) north of Cairo where his family lives.

Earlier this year, Abdel-Fattah gained British citizenship through his mother, Laila Soueif, a math professor at Cairo University who was born in London. The family said at the time they sought a British passport for Abdel-Fattah as a way out of his impossible ordeal. The family has been asking authorities to grant him access to a consular visit.

On Friday, the U.K.’s Foreign Office said Foreign Secretary Liz Truss raised Abdel-Fattahs case during a meeting with her Egyptian counterpart earlier this month in London. The statement said the U.K. is working to secure his release and called on Egyptian authorities to ensure his welfare needs are met while in prison.

Stowaways found on a ship’s rudder in Spain’s Canary...

EU seeking to offset Biden’s green plans with own...

Japan’s Best Stock This Year Is a Games Studio...

List of Emmy Award winners include Keaton and Garner

Snapchat will now display restaurant recommendations in the Snap...

Michigan’s Mike Hart back from hospital after medical emergency

US midterm elections: Who won, who lost and what...

Health experts plead with Biden to ‘reverse course’ in...

The Ford F-150 is Getting Outsold by the Toyota...

Engadget Podcast: What’s up with ‘Overwatch 2?’

Vinyl Outsells CDs for the First Time Since 1987...

A Ghostbusters VR game is coming to Meta Quest...

Florida is so cold iguanas are falling out of...

This teenager in Kenya is hoping to catch FIFA’s...

Ransomware payments are falling as victims refuse to pay up