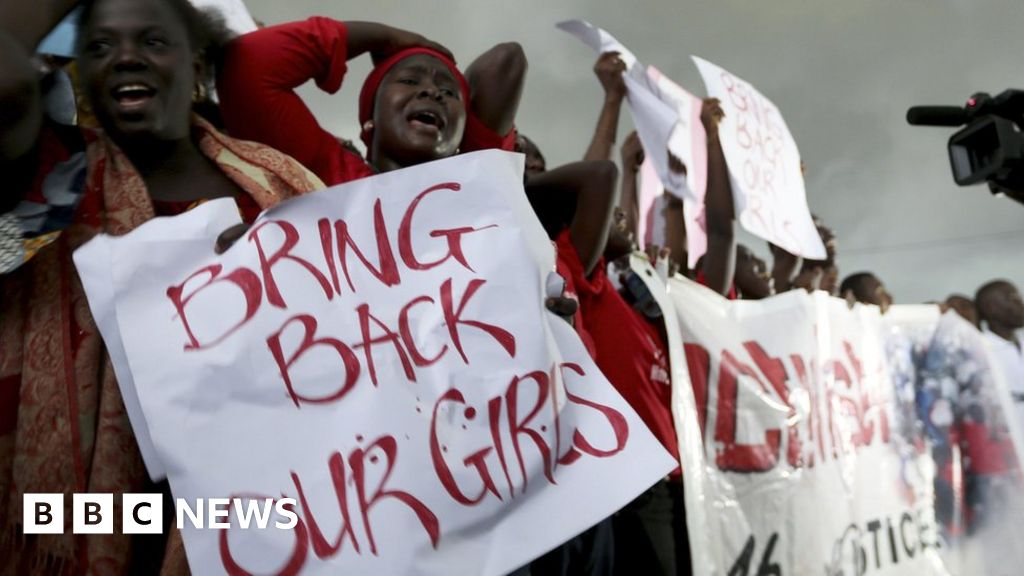 The Nigerian army says it has found two more of the female students abducted by Boko Haram militants from a secondary school more than eight years ago.

There was global outrage when Islamists seized nearly 300 girls in Nigeria’s north-eastern town of Chibok in 2014.

Most of the victims have either been freed or escaped since then, but dozens remain unaccounted for.

It appears the two hostages gave birth while in captivity, as the army said they were both found with children.

One of the abductees was seen with a child, the other with two children.

Other victims of the mass abduction have described being forced to convert to Islam and marry the group’s fighters.

The authorities said the ”intercepted Chibok girls and their children” were in a military medical facility.

They were found on Monday during military operations against extremists in north-eastern Nigeria.

In total, 276 girls seized were from their school dormitory in the middle of the night on 14 April 2014.

Campaign group Bring Back Our Girls says many have since escaped, been released or found by the military – though more than 100 are still missing.

Between 2016 and 2018, 103 of the victims were freed following negotiations between the Nigerian government and the militants.

Reports indicate that the militants have recently been abandoning their remaining captives, partly due to an intense multi-national military campaign against them.

A long-running jihadist insurgency in north-eastern Nigeria has left 40,000 dead and 2.2 million displaced, according to the AFP news agency.

Many other schools and universities in the region were attacked in the years following the 2014 Chibok kidnapping.

Some of the assaults have been by jihadists – but more frequently by criminal groups known locally as “bandits”, who engage in mass abduction for ransom.

Instead, parents and relatives have been left to pay the amounts demanded by the bandits for their children’s release. Kamala Harris to speak at Essence Festival, expected to...

Nintendo Switch Sports couldn’t be coming at a better...

Verizon and AT&T will not delay 5G C-Band rollout,...

Biden’s admission to ‘no federal solution’ to pandemic inconsistent...

Williams sisters are legends, not me, says Swiatek after...

On The Money — Russia’s war could spike global...

A stunning fall for ex-Honduran president wanted in US

SWPL1: Glasgow City given scare by Motherwell as champions...

Artist born without hands inspired to paint his muse — his late...

Iraqi protesters, many of them followers of an influential cleric, storm parliament...