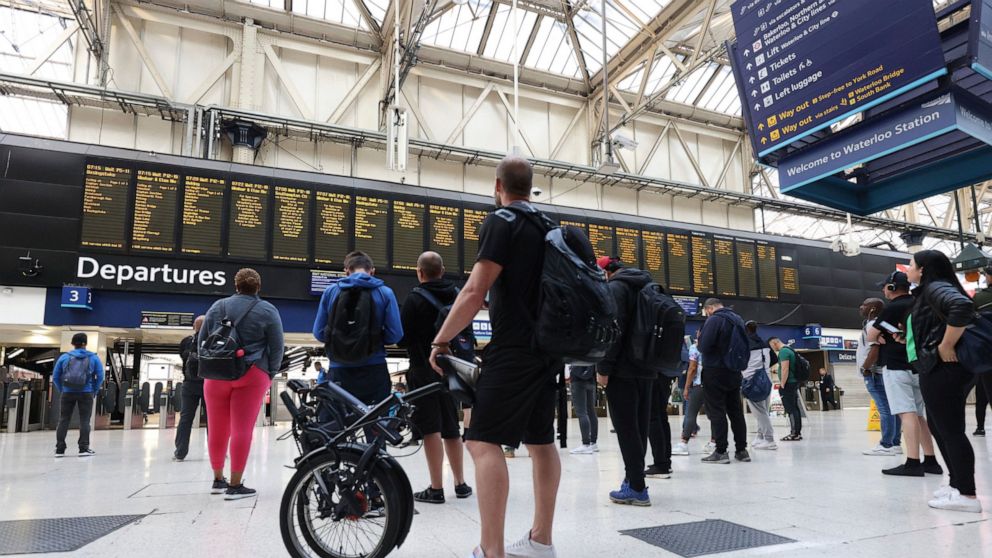 LONDON — Britains railway network ground to a crawl on Wednesday after 40,000 staff walked off the job in a dispute over jobs, pay and working conditions. Train companies said only about a fifth of services across the country were due to run.

The 24-hour strike by cleaners, signalers, maintenance workers and station staff comes a month after the countrys most disruptive rail walkout in three decades brought trains to a halt across the U.K at the start of the summer holiday season.

The dispute centers on pay, working conditions and job security as Britains railways struggle to adapt to travel and commuting habits changed perhaps forever by the coronavirus pandemic. There were almost 1 billion train journeys in the U.K. in the year to March, compared to 1.7 billion in the 12 months before the pandemic, and rail companies are looking to cut costs and staffing.

Negotiations have so far ended in deadlock. The National Union of Rail, Maritime and Transport Workers says employers latest pay offer falls short amid soaring inflation currently at 9.4% and the worst cost of living crisis in decades.

It accuses the Conservative government of preventing train companies from making a better offer. The government says it is not directly involved in the dispute.

RMT general secretary Mick Lynch said the union will continue to negotiate in good faith, but we will not be bullied or cajoled by anyone.

The government need to stop their interference in this dispute so the rail employers can come to a negotiated settlement with us, he said.

Transport Secretary Grant Shapps accused union leaders of trying to cause as much disruption as possible to the day-to-day lives of millions of hardworking people around the country.

He said the strike had been cynically timed to disrupt a semi-final of the European womens soccer tournament on Wednesday in Milton Keynes, north of London, and the opening of the Commonwealth Games in Birmingham on Thursday.

The union staged three one-day strikes last month that stopped services across much of the country.

More strikes are planned for Saturday, when train drivers are set to walk out, and on three days in August.

Where the Russia-Ukraine conflict goes from here

Is Soaring Consumer Credit Bad for US Economy?

Getting high on HRI

How to Upload Custom Emoji in Slack

In election, support for abortion rights was about much...

PMQs: Duffield and Raab on women’s rights and abortion...

Why do astronauts get “space anemia”? This study has...

Nations can no longer be ‘prisoners of petrostate dictators’...

Keeping up with Katherine Clark

Why do quick-fix QBs like Russell Wilson, Matt Ryan...

Carlos Correa is a 28-year-old superstar. Which MLB teams...

Supplier to hire 630 near Hyundai’s EV plant in...

The squirrels ‘splooting’ all over New York City are...

Trump and Pence hold dueling rallies for Perdue and...

UK’s Johnson does not expect Putin to use tactical...

Lawmakers sound the alarm on Biden’s plan to cancel...

Donald Glover gets grounded on final season of ‘Atlanta’

‘A complete smear job against me’: Johnson spars with...

FTX founder appears in US court on fraud charges

It’s a little late to be talking about red...

A design history of the world’s most popular sport

Brittney Griner set to testify in Russian court as US works to...