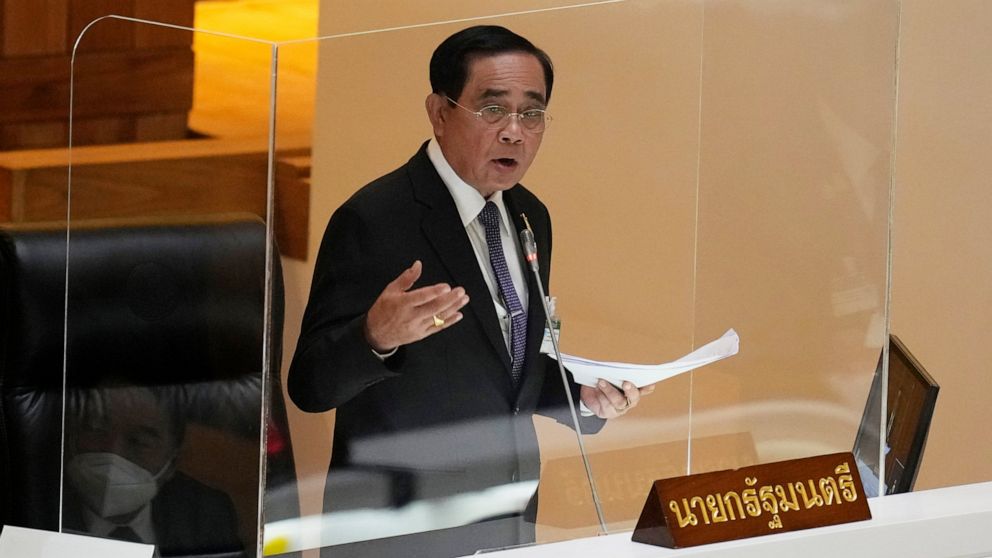 BANGKOK — Thai lawmakers on Tuesday began a no-confidence debate targeting Prime Minister Prayuth Chan-ocha and 10 of his Cabinet members, with the opposition accusing them of corruption and economic mismanagement.

This is likely the last no-confidence vote that Prayuths government faces before its four-year term ends next year. The debate is scheduled for four days, with the lower house to vote on Saturday.

Analysts said Prayuth, who has survived three earlier no-confidence votes, is expected to prevail again as his coalition government has a parliamentary majority.

Kicking off the debate, the opposition Pheu Thai leader Cholanan Srikaew blamed the government’s mismanagement for broadening the gap between rich and poor, and leading Thailand to take a step backward economically. He also accused Prayuth of ignoring corruption in government agencies and increasing unnecessary public debts to support his populist policies.

Thailand is a coma patient, Cholanan said. It is overwhelmed with debts because of this government.

In defense, Prayuth said his government has successfully steered the economy and handled the COVID-19 pandemic over the past two years.

We are able to reopen the country, generate income and resume the economy, Prayuth said. We can prove it with the numbers.

Prayuth came to power in a 2014 coup before winning a general election in 2019 and becoming prime minister, backed by the ruling Palang Pracharath Party, though it is roiled by internal rifts. It sacked its controversial Secretary-General Thammanat Prompao and 20 other Parliament ministers last year, who later joined the newly-established Thai Economic Party.

Pichai Naripthaphan, a senior official in the Pheu Thai Party, told the AP he believes the conflict in the Palang Pacharath Party may cause some of the targeted ministers to be voted out this time.

We expect that this debate will unveil the truth and strongly convince Thai people to choose the right party and the right people in the next election, he said.

The coalition government has 253 parliamentary seats, in contrast to the opposition’s 224. Each of the targeted Cabinet members must get at least 239 votes to survive.

Associate Professor Kovit Wongsurawat, a lecturer at the School of Law, Assumption University, said Prayuth and all the ministers were likely to weather the no-confidence vote but there may be a Cabinet reshuffle afterwards.

I think there are negotiations behind the scenes among the government coalition. It is all about political benefits, especially when a new election is coming soon, he said.

In conjunction with the debate, anti-government protesters are camping outside parliament. Organizers have vowed to stage activities, including their own no-confidence vote, to pile pressure on lawmakers to vote Prayuth out of office.

Thousands of people took to the streets in 2020 to demand Prayuth and his cabinet resign. They also called for the constitution to be amended and the monarchy to be reformed. But the protests lost momentum due to the COVID-19 pandemic with most of their leaders facing lese majeste charges. Anyone who insults or defames key members of the royal family, including the king, queen, heir apparent or regent, can be sentenced to up to 15 years in prison on each charge under the countrys special laws. This interactive map shows the shift in America’s biggest...

Wall Street points higher before the bell with all...

Corrections official dies after she and and escaped inmate...

James Carville: Dems ‘whine too much,’ need to highlight...

Hoover Dam Explosion Cause Determined to Be Blown Transformer

Elon Musk’s first order of business after taking over...

Japan eager to welcome tourists from abroad amid cheap...

Dylan’s new Blowin’ In The Wind sells for £1.5m

Woman hit by train while in police car is...

Biden’s quiet campaign to bring Saudi Arabia around on...

Macau returns to mass COVID testing after case in...

3 ways China and Russia are forging much closer...

Frustrated Democrats amp up pressure on Biden over global...

Twitter lawyer to employees fearing a FTC crackdown over...

EXCLUSIVE Pope Francis denies he is planning to resign...

Snow to blanket Kyiv from Sunday as power still...

As Russian troops mass in Belarus, nerves start to...

U.S. midshipman falls to his death over waterfall in Chile