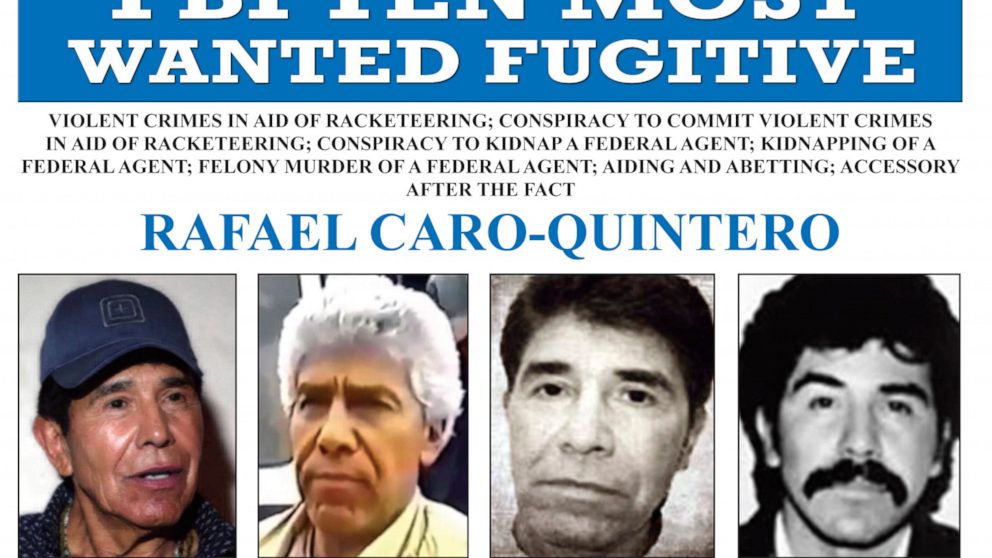 MEXICO CITY — The extradition of drug trafficker Rafael Caro Quintero, captured in the mountains of northwest Mexico, will not happen quickly, according to a judges ruling published Monday.

The Mexican judge issued what amounts to an injunction preventing Caro Quintero from being sent to the United States without going through the formal extradition process. The judge also ruled that he must remain in the maximum security prison west of the capital where he was taken after his capture while that process plays out.

After Caro Quinteros arrest Friday, the U.S. government said it would seek his immediate extradition. That process began Saturday, but as expected, Caro Quinteros lawyers intervened.

The man allegedly responsible for the murder of DEA agent Enrique Kiki Camarena in 1985 was captured by Mexican marines Friday in the state of Sinaloa.

If there is an arrest order it has to be executed and if support is asked of the (Mexican) government its executed, whoever it is, its a routine affair, they (the armed forces) dont need to consult me, López Obrador said during his daily news conference.

Asked if the DEA had located Caro Quintero and told Mexicos marines where to find him, López Obrador said no. He said the marines had developed the intelligence on where the 69-year-old drug lord was hiding was and acted on it.

The president did say that regular cooperation between the two countries exists and U.S. authorities participate when necessary, for example with drones, but clarified that that was not the case this time.

Few details about the capture have been made public so how it all came together remains unclear. It did come three days after López Obrador met with President Joe Biden in Washington.

And the DEA Administrator Anne Milgram made it sound like a collaborative effort in a message to the agency late Friday.

Our incredible DEA team in Mexico worked in partnership with Mexican authorities to capture and arrest Rafael Caro Quintero, she said in a message to the agency late Friday. Todays arrest is the result of years of your blood, sweat, and tears.

Caro Quintero had blamed Camarena for a raid on a huge marijuana plantation in 1984. The next year, Camarena was kidnapped in Guadalajara, allegedly on orders from Caro Quintero. His tortured body was found a month later.

Caro Quintero was captured in Costa Rica in 1985 and was serving a 40-year sentence in Mexico when an appeals court overturned his verdict in 2013. The Supreme Court upheld the sentence, but it was too late Caro Quintero had been spirited off in a waiting vehicle.

Caro Quintero was added to FBIs 10 most wanted list in 2018 with a $20 million reward for his capture. Putin’s path: from pledges of stability to nuclear threats

Yet another critical VPN-related bug found in iOS 16

Vivienne Westwood, maverick fashion designer with roots in the...

We want your pitch decks!

The Ghanaian giant reported to be the world’s tallest...

Comcast raises speeds for most of its Xfinity internet...

Here’s what NASA’s Orion spacecraft is doing over Thanksgiving...

Biden tells Zelensky that U.S. and allies will respond...

Maine government looking into four dams in order to...

Dems bask in the speaker schadenfreude

Someone modded ‘Doom’ to add ray-tracing

Adams to lift vaccine mandate for performers and athletes...

What’s new on Disney Plus this month

Josh Allen does it all on game-winning drive for...

New gun control laws brought to you by… Ed...

The EU has had enough of “smart” devices with...

This Microsoft 365 phishing campaign is using some crafty...

Torvalds confirms Rust is coming to the new version...

MoneyWatch: Why the pandemic is driving fears of global recession

Oil output in Permian to rise in August to highest on record...