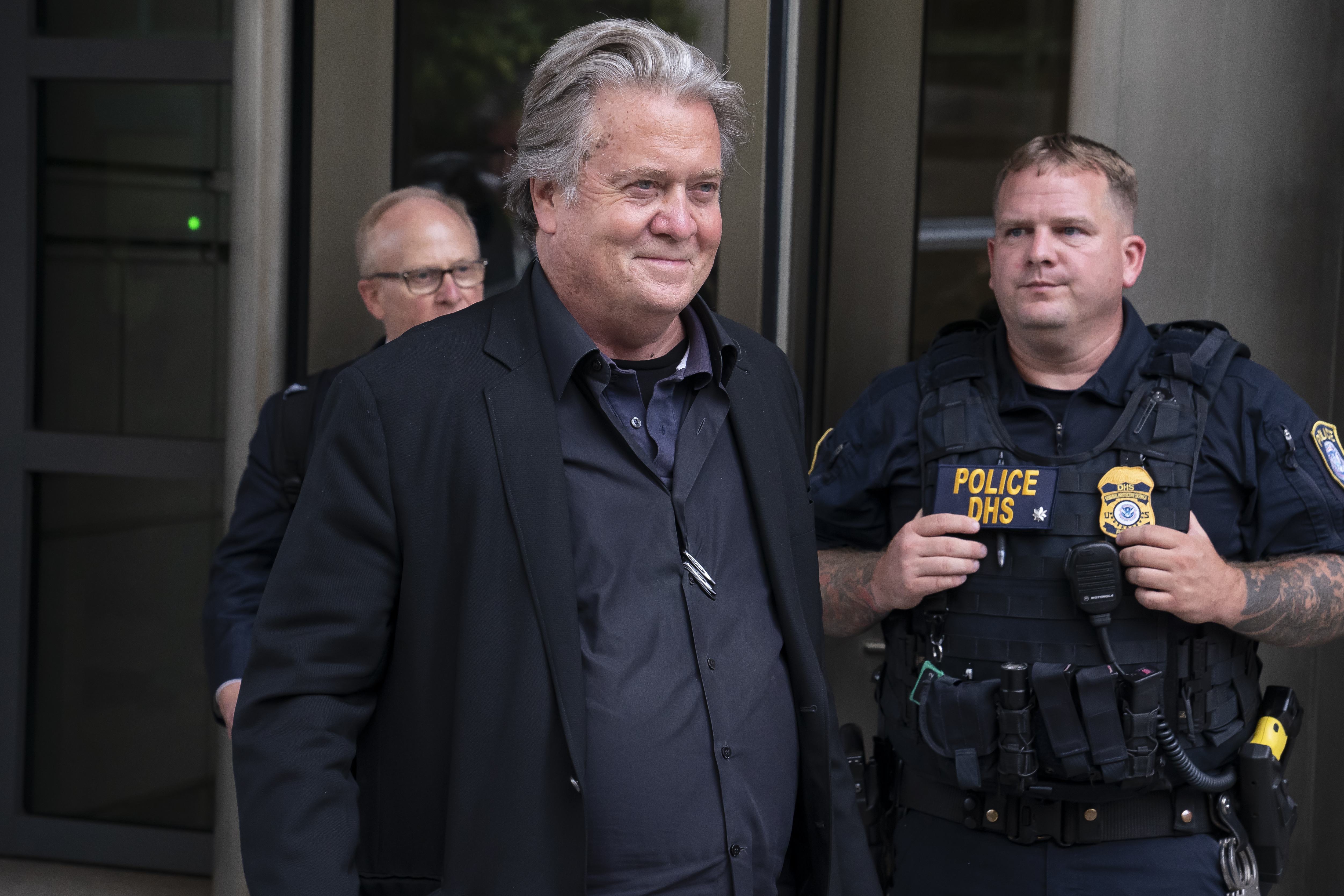 Bannons attorneys have questioned whether its possible for him to receive a fair trial given the intense media scrutiny around Bannon and the select committee. But U.S. District Court Judge Carl Nichols, a Trump appointee, rejected those concerns, saying he would revisit the matter after thorough interviews of prospective jurors to ensure they could judge the case fairly.

On Tuesday morning, prosecutors and defense attorneys will whittle the 22 potential jurors to 14 12 jurors and two alternates before opening arguments begin.

The impending seating of a jury guarantees a high-profile trial for one of the Jan. 6 committees most significant holdouts. Bannon, who received a presidential pardon from Trump for unrelated conduct, was repeatedly in contact with Trump in the days and weeks preceding Jan. 6, 2021, when a mob of Trump supporters swarmed the Capitol and disrupted the transition of power, battering through police lines and sending lawmakers fleeing. Bannon was involved in a so-called war room at the Willard Hotel in Washington, D.C., where Trump allies oversaw a strategy to challenge the results of the 2020 presidential election during a joint session of Congress that day.

The select committee subpoenaed Bannon last September, and the House held him in contempt of Congress a month later. The Justice Department charged him with two counts of contempt of Congress in early November: one for defying demands for documents, the other for refusing to testify. Each count carries a maximum of a year in prison.

Speaking to reporters outside the courthouse following Mondays proceedings, Bannon lashed out at the Jan. 6 committee, calling its public hearings a show trial and saying he looked forward to his criminal trial beginning Tuesday. Asked whether he believed his jury could be fair, Bannon replied, Yes, I do.

Bannon, in recent days, indicated he would relent and cooperate with the select committee, but so far he has yet to provide documents or testimony to the panel.

The seating of a jury came despite Bannons inflammatory public statements surrounding the trial, some of them delivered from outside the courthouse near Capitol Hill. Bannon sought to subpoena individual members of the select committee as defense witnesses, claiming they should be grilled about potential bias, but Nichols rejected that motion. Some potential jurors called to appear on Monday seemed familiar with Bannons remarks.

One man said during questioning that hed seen Bannon quoted as saying on his podcast last week that he planned to go full medieval at the trial.

I felt that was a purely preposterous statement, the would-be juror said of Bannons declaration on his War Room podcast last Tuesday. Pray for our enemies, because were going medieval on these people. Were going to savage our enemies, Bannon said in a statement that seemed primarily directed at members of the House committee.

The man was disqualified from the jury pool, but ultimately prosecutors and defense attorneys whittled the group down to a pool of 22 potential jurors whom Nichols viewed as qualified to sit in the trial. Among them: a NASA photographer, a program manager at the International Republican Institute, an online art seller, a hospital physician and a man who works part-time for a film festival.

Among those stricken from the jury pool were a woman who said her mother has worked for Rep. Lois Frankel (D-Fla.) for nearly a decade and a barbershop employee who said Jan. 6 didnt look good on Bannon. The barbershop employee also noted that he had a tattoo with an unfavorable comment about the police. A third disqualified juror was a Washington political journalist who said he had emailed Bannon for a story at least once.

One potential juror was qualified in the final pool despite an objection from prosecutors. The woman described under seal an experience that either she or a family member or friend had as a victim of crime. Later, prosecutors said they worried that her answer suggested she might be biased against them, but Nichols rejected the argument and included her in the final group.

to the contempt of Congress charges, including his ability to argue that he relied on his lawyers advice that he didnt have to comply with the subpoenas or that Justice Department legal opinions indicated he should be covered by executive privilege.

One potential juror said hed seen a quote from a Bannon lawyer saying the judges ruling meant Bannon might not have any defenses left. That juror, who identified himself as an attorney at Kirkland & Ellis, also said he has a civil trial scheduled before Nichols early next month. Prosecutors and defense lawyers initially made no objection to the manstaying on the jury, but the prosecution later asked Nichols to strike him and the judge did so.

Bannons defense attorney Evan Corcoran also suggested to one juror on Monday afternoon that Bannons defense could rest on a slender argument that Nichols seems to have left the door open for Bannon to try: that he didnt think the so-called return dates on the subpoenas last October were final and that his lawyer Robert Costello was still in discussions with the committee.

Bannons defense recently sought to delay the trial for at least three months to allow publicity related to the House Jan. 6 hearings to abate. However, Nichols denied that request, saying he was confident they could find a jury that wasnt immersed in coverage of the televised House hearings.

During questioning in the courtroom on Monday, at least two potential jurors said theyd watched the House Jan. 6 hearings in their entirety.

One woman qualified for the jury also said shed seen a video clip played during the hearings in which Bannon said on Jan. 5, 2021, that he expected major developments in Washington the following day. She said he said that he expected it to be a very exciting day, but his exact comments on his podcast were: All hell is going to break loose tomorrow. Its gonna be moving. Its gonna be quick.

One man who was excused said hed read a lot about the case. He also said he would tend not to believe Bannon because of the people hes affiliated with.

Another man said repeatedly that it was important for the Jan. 6 committee to get to the bottom of what happened that day. He also said he wasnt a fan of Trump and couldnt focus on his work on that day because he was so upset.

Nichols excused the man at the defenses request, but prosecutor Molly Gaston said people shouldnt be kicked out of the jury pool because of general support for the House panels work.

We should not be disqualifying people just because they think the work of the committee is important, she said.

Some potential jurors said they were largely unfamiliar with the House committees work, while others said they were entirely unaware of the case against Bannon. I had no idea it was happening, said one man, who was deemed qualified for the jury.

Im not very politically motivated or interested, said one woman who was also deemed qualified.

Others were more openly skeptical of Bannons actions.

I dont know what the defense would be because it seems straightforward to me, said one man who was excused.

Honestly, I am not a fan of Steve Bannon personally, declared one man, who said he interned for then Sen. Claire McCaskill (D-Mo.) eight years ago and now works in finance.

The prospective juror said he knew about the House Jan, 6 committee but hadnt paid much attention to it.

I havent heard that much, he said. Ive been taking a break from the news. Struggling to pay your energy bills? Here’s what you...

Chris Mason: Our next PM is still far from...

US troops in Poland setting up processing centers for...

Nearly Half of Americans Say They Pay Too Much...

NFL odds Week 4: Are bettors getting over on...

Iran lashes out at France over new Charlie Hebdo...

Marshal of the Supreme Court asks Maryland officials to...

Sarfaraz Khan: The ‘wandering cricketer’ on the road to...

Salesforce cuts 10% of staff in layoffs as boss...

AMD graphics cards could get a free speed boost

Royal fans camp outside Abbey ahead of funeral

Rapper Pa Salieu ‘picked up bottle to defend himself’

Here are the Trump-backed candidates who won the Nebraska...

Microsoft will fully reopen its headquarters on February 28th

Dak Prescott, Cowboys prove how far they have to...

AMD has revealed a whole host of CPU security...

Over half of U.S. in drought as wildfires burn,...

The Pro Bowl’s understandable lack of tackling had NFL...