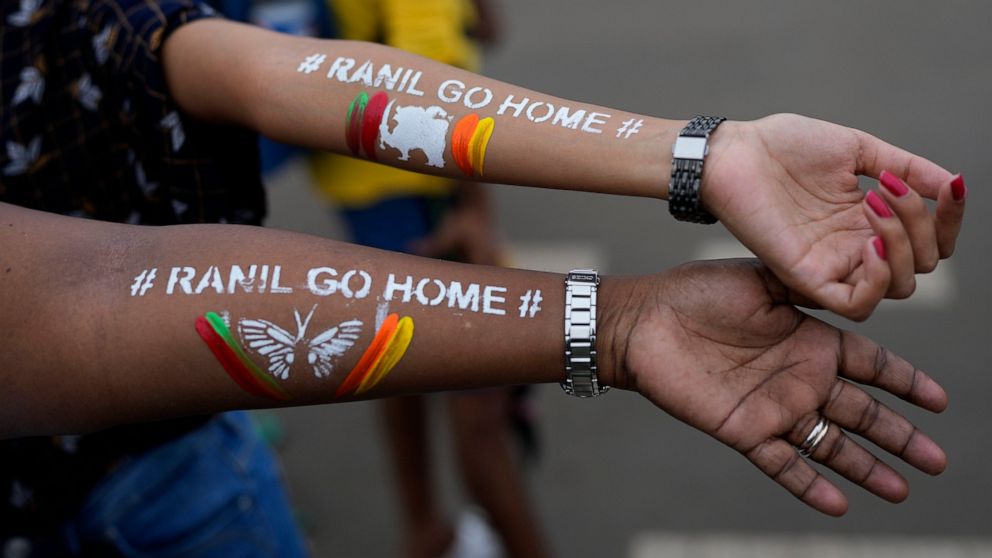 Wickremesinghes move to impose a state of emergency comes as protests demanding his resignation too have continued in most parts of the country, with some protesters burning his effigy.

Lawmakers who met on Saturday began the process of electing a new leader to serve the rest of the term abandoned by Rajapaksa. Nominations for the election of the new president will be heard on Tuesday, and if there is more than one candidate the lawmakers will vote on Wednesday.

The emergency decree issued by Wickremesinghe invokes sections of the Public Security Ordinance that allow him to make regulations in the interests of public security, the preservation of public order, the suppression of mutiny, riot or civil commotion, or for the maintenance of essential supplies.

Under the emergency regulations, Wickremesinghe can authorize detentions, take possession of any property and search any premises. He can also change or suspend any law.

The South Indian island nation is engulfed in an unprecedented economic crisis that has triggered political uncertainty.

Sri Lanka has run short of money to pay for imports of basic necessities such as food, fertilizer, medicine and fuel for its 22 million people. Its rapid economic decline has been all the more shocking because before the crisis the economy had been expanding, with a growing, comfortable middle class.

Sri Lanka is seeking help from the International Monetary Fund and other creditors, but top officials say its finances are so poor that even obtaining a bailout has proven difficult.

The economic hardships led to political upheaval and widespread protests demanding the government led by Rajapaksa step down. Although many ministers resigned in April, Rajapaksa had remained in power until last week.

The main protests have occurred in the capital, Colombo, where protesters occupied the front of the presidents office for more than 100 days.

The protesters accuse Rajapaksa and his powerful political family of siphoning money from government coffers and of hastening the countrys collapse by mismanaging the economy. The family has denied the corruption allegations, but Rajapaksa acknowledged that some of his policies contributed to Sri Lankas meltdown.

Rajapaksa flew first to the Maldives on Wednesday and then to Singapore.

Terra (UST) to Halt New Transactions on Its Blockchain

Baidu’s first robocar looks like the future we pictured...

Netflix to rely on Microsoft for its ad-backed video...

Court says Congress can get some, but not all,...

Yair Lapid: The TV host set to be Israel’s...

Man Telling Wife She Was ‘Incapable of Being a...

Kids Ask Questions To Crush From ‘Finding Nemo’ in...

Motorcyclist killed in crash in Moray named as Sunderland...

Fauci Says There Is ‘No Chance’ We Will Eliminate...

In a first, coin bearing zodiac found off Israel’s...

Porsche shares rise in one of Europe’s largest market...

Michael Jones on the Markets (Radio)

Germany urged to cap heat in offices this winter...

Transcript: Senator Pat Toomey on the Bad State of...

Bug popsicles and air-conditioned bedrooms: Here’s how zoos are...

Novak Djokovic Is Back Training for Australian Open Following...

Small planes collide near Las Vegas, killing all four on board