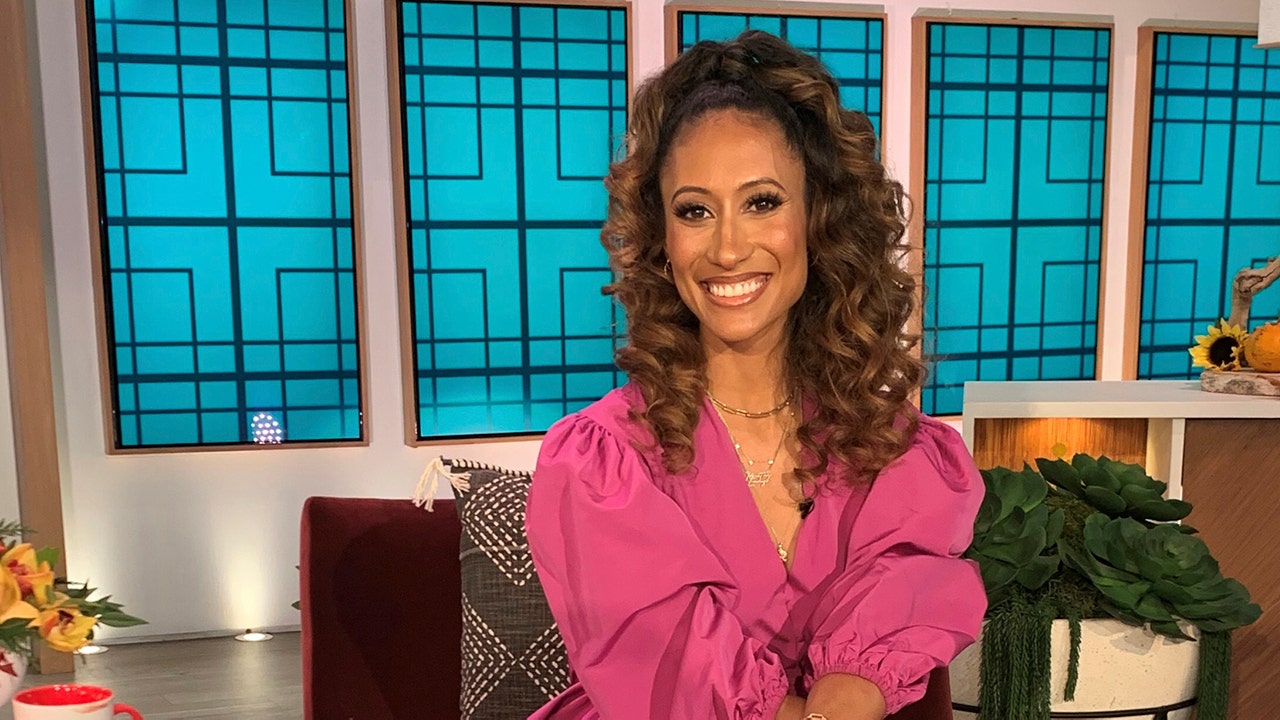 “The Talk” host Elaine Welteroth explained leaked audio that revealed she consoled Sharon Osbourne following the blow-up debate that led to Osbourne’s exit from the show.

“I thought we had closed the painful, public chapter of the controversy related to the March 10th show,” Welteroth said in a statement to Entertainment Tonight.

“Today, however, I learned that my private comments made moments after the incident from a place of compassion to a then-colleague (the most senior level co-host on The Talk) were recordedwithout my consent or knowledgeand shared with the media.”

Welteroth claimed that everything she has shared has been “consistent” with what was said on the show.

“Nothing has changed,” she told the outlet. “It is not news that I did not call Sharon a racist and it is certainly not news that the way the show unfolded caught us all by surprise.”

“None of us wanted that day to go how it did and I do not regret sharing these feelings in a private conversation with a colleague. I welcome fair, constructive dialogue and I am no stranger to tough conversations about race. But I will not be vilified for telling the truth, on or off-air.”

Welteroth went on to claim she was “unlawfully recorded without consent.” She also alleged that she never filed a complaint to HR about Osbourne during her time at “The Talk.”

“To set the record straight, it was not a hot micI was unlawfully recorded without consent. And I never filed a complaint with HR against Sharon Osbourne or anyone else.”

“I am disheartened, however, that my kindness has been taken out of context and weaponized in an attempt to absolve responsibility for someone elses actions.”

Osbourne, who left “The Talk” in April, opened up about the controversy during an interview with Bill Maher.

“Disagreeing with someone does not make you a racist in my book.”

A pandemic record of at least 20 expectant mothers died from COVID-19 in the U.S. in the month of August.
Read more

Ratchet and Clank: Rift Apart is fast-paced fun for the whole family, offering a mix of humor, charm and heart.
Read more

A U.S. resident is hospitalized in Dallas with a rare confirmed case of monkeypox, the Centers for Disease Control and Prevention (CDC) and Texas health officials announced Friday.
Read more

For decades, since the U.S. Supreme Court modernized the redistricting process in the 1960s, the city of Nashville has had its own representative in Congress. That member has often represented some neighboring suburbs — today, Rep. Jim Cooper’s (D) district i…
Read more

Even ‘dungers’ are too pricey in NZ property market

When Is Derek Chauvin Being Sentenced? Date Falls Just...

The timing of a Minneapolis police officer's sentencing could prove a poignant moment for many Black Americans.
Read more

What I Learned on My Quest to Fix America’s...

Middleware could be the solution to our tech woes, but Congress is going to have to force the Internet companies to use it.
Read more

Samsung’s next-gen Odyssey G9 might just be the best...

Taiba Investment Co. and Dur Hospitality Co. are in talks to combine their businesses, potentially forming a company with a total market value of about $2.4 billion in Saudi Arabia’s hospitality and investment industry.
Read more

Woman’s Body Found After Fall in Mystery Canyon at...

Authorities said the woman was canyoneering in Mystery Canyon, Utah, when she fell 50 to 80 feet to her death.
Read more

This Friday Tune In To ‘The Most Magical Story...

Get ready for a special unlike anything you’ve ever seen from Disney Parks! This Friday “The Most Magical Story on Earth: 50 Years of Walt Disney World” airs on ABC and you won’t want to miss it.
Read more

AMD is giving away Far Cry 6 and Resident...

This offer was only previously available to buyers of AMD systems with both Ryzen CPUs and RX 6000 GPUs.
Read more

Search is on for missing 6-year-old in Hawaii

Isabella Kalua, 6, was last seen in her bedroom on the night of Sept. 12.
Read more

The U.S. State Department has announced that it is pulling the travel visas of 100 legislators, judges and prosecutors who aided the regime of President Daniel Ortega
Read more

Some Indonesian students return to schools, at a distance

Dawn Bilbrough: ‘Long-term I don’t think I’ll be in...

Nurse Dawn Bilbrough told the BBC its been 'quite difficult to maintain energy' this past year.
Read more

Asian stocks mixed ahead of US inflation data

Asian stocks are mixed ahead of U.S. inflation data offering a glimpse at how the world’s largest economy is recovering
Read more

US Blocks Seafood From Chinese Fleet Over Crew Mistreatment

Washington (AP) -- The U.S. government blocked imports of seafood Friday from the entire fleet of a Chinese company that authorities say forced crew members to work in slave-like conditions that led to the deaths of several Indonesian fishermen last year.
Read more

President Biden on Wednesday proposed tax increases for high-income individuals — including increases to the top income tax rate and capital gains tax rate — as a way to pay for his new plan focused on education and child care.
Read more

A U.S. report has found that abstract emergency response guidelines for the Federal Communications Commission could have caused confusion and delays after Hurricane Maria devastated Puerto Rico and the U.S. Virgin Islands in 2017
Read more

A fact-check from The Washington Post concluded that there is no evidence that the man who claimed to be a descendent of Robert E. Lee was actually related to the Confederate general
Read more

Shane Chesson, co-founder of Openspace Ventures, which is backed by Temasek Holdings Pte, discusses the Singapore-based firm's strategy and outlook. Openspace has closed its third Southeast Asia fund at $200 million as the venture capital firm seeks to replic…
Read more

Paul Whelan returns to Russian labor camp after being...

Paul Whelan, an American detained in Russia, returned to his labor camp last Wednesday after spending nearly three weeks in a medical facility at a different camp, his brother said Monday.
Read more

Proof of vaccination is becoming law in countries across Europe, but some feel passports infringe on their privacy. Protests popped up across countries, including a violent march in Paris. CBS News senior foreign correspondent Elizabeth Palmer joins "CBSN AM"…
Read more

Abu Dhabi plans to invest $6 billion in the cultural and creative industries over the next five years as the energy-rich sheikhdom diversifies away from oil, the Financial Times reported.
Read more

Not enough benefit to offer all teens Covid jabs

But a larger group of 12-15 year olds with underlying conditions will get the vaccine.
Read more

Sanofi (SASY.PA) and GlaxoSmithKline (GSK.L) said on Thursday they were launching Phase III trial, the late-stage before submitting approval, for their experimental COVID-19 vaccine.
Read more

Body found in Wyoming believed to be Gabrielle Petito

The liberal super PAC American Bridge 21st Century is placing the first ad in its $100 million campaign to boost Democrats ahead of the 2022 midterm elections, touting the massive stimulus package signed by President Bide...
Read more

Bournemouth beat Luton Town 2-0 to move to the top of the Championship table.
Read more

The lads from Richmond have an uphill battle to climb in season 2 of Apple TV+'s "Ted Lasso," but Ted might know someone who can maybe whip them into shape ... Led Tasso.
Read more

As deaths rise, vaccine opponents find a foothold in...

Hospitals across Bosnia are again filling with COVID-19 patients gasping for air, and the country’s pandemic death toll is rising
Read more

Max Woosey will be spending the milestone night sleeping in a shelter in the woods.
Read more

We leave you this Sunday with a view of waterfalls in Oregon's Cascade Mountains, where the American Dipper shows how it earned its name. Videographer: Charles Schultz.
Read more

Gunfight, crash after man calls police to say he...

Violence unfolded Thursday in Pennsylvania when a man called police to say he killed his parents and wanted to surrender but instead started a gunfight, police said.
Read more

Nobody beats Shelby Rogers six times in a row...

American Shelby Rogers was possibly searching for some inspiration when she watched a 41-year-old video of compatriot Vitas Gerulaitis before her third round match against world number one Ash Barty on Saturday.
Read more

Restaurant industry groups sued to block new laws that give many fast-food workers in New York City union-style protection from firings or having their hours cut.
Read more

Man charged in connection with woman’s death in Airdrie

The 54-year-old was pronounced dead at the scene of the incident in Torrance Avenue on Sunday.
Read more

Your Garmin watch is getting some great new training...

Two Vietnam War veterans on the similarities between the struggle against Covid and fighting a war.
Read more

EU, U.K. Trade Blows Over Claim That Britain Is...

College pitcher dies due to complications from Tommy John...

Protests over “shocking imbalance” of COVID vaccine distribution in...

The World Health Organization has panned the way the coronavirus vaccine has been distributed in South Africa between the rich and poor. And for those living there, it's happened before. Debora Patta has the story.
Read more

Former Sen. Scott Brown (R-Mass.) on Sunday expressed support for a 9/11-style commission to investigate the Jan. 6 attack on the U.S. Capitol, calling it a "no brainer.""To me it's a no brainer....
Read more

Russia says it is ending military buildup at Ukrainian...

Russia on Thursday said it would be ending its massive military buildup at the Ukrainian border, which has increased tensions with Ukraine, the United States and other western countries. Russia s...
Read more

Business leaders are the key to ending labor shortages...

Companies will have to take greater ownership over the development of their own workforces.
Read more

A shooting inside a food court at a Philadelphia mall on Monday left one person dead, according to the Philadelphia Police Department.The incident occurred at approximately 5:05 p.m. at the entra...
Read more

EXPLAINER: Who are Americans on trial in Ghosn’s escape

An OPEC+ ministerial panel recommended a gradual increase in oil output to the end of the year, paving the way for the wider group to reach a deal that would keep a firm grip on supply even as prices trade at two-year highs.
Read more

Las Vegas Raiders kicker Daniel Carlson was 4-for-4 on field goals and 2-for-2 on extra points in the Raiders’ victory over the Pittsburgh Steelers on Sunday, but it hurt him in fantasy football.
Read more

Nikolas Cruz, who is suspected of murdering 17 people at Marjory Stoneman Douglas High School in February 2018, will plead guilty to all 17 counts of murder and 17 counts of attempted murder to avoid going to trial, WSVN reports.
Read more

A year after outbreak, Latinos still reeling, but optimistic

Latinos in the U.S. were hit hard by the coronavirus pandemic, suffering disproportionate rates of infection, death and job loss
Read more