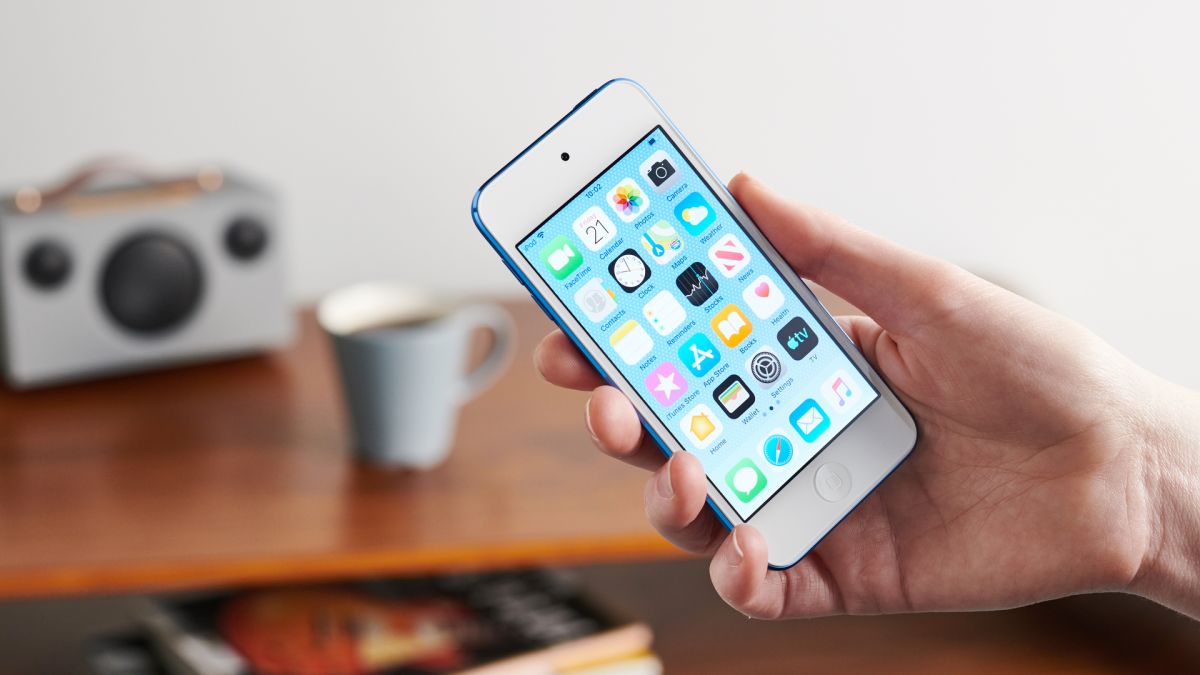 In what is sure to be the unlikeliest Apple rumor youll read today, tech evangelist and industry insider Robert Scoble says that a new iPod 8th gen will be unveiled alongside the Apple Glasses at WWDC 2022 that will be held in June of next year.

The two will apparently have some form of connectivity to one another though Scoble doesnt explain how or why but goes on to say that theyll be available to buy before December 25, 2022 (Christmas of next year).

Regarding Apples VR headset:Just learned it will launch at WWDC next year because the new iPod will be a huge deal for Christmas.The iPod introduces many of the experiences you will more fully experience by Christmas of 2022 in the headset and expect them to work together.July 15, 2021

As wild as this all sounds – and boy does it sound wild – we have heard rumblings of a new iPod Touch in development at Apple from MacRumors contributor Steve Moser and Twitter tipster @AppleLe257, so theres some precedent for todays rumor.

That said, no one up to this point has claimed that it would be unveiled alongside Apples still fabled AR headset and I dont think there was anyone out there in the world who thought the two products would work together somehow. And yet, here we are.

Apple hasn’t released a new iPod Touch since 2019 and for the last few years hasnt really discussed refreshing the iPod. While the company hasn’t said it publicly, it seems to have replaced the iPod Touch with the cheapest iPhone series, the iPhone SE.

Still, there are some good arguments to be made for a standalone MP3 player. For one, it would have a headphone jack, something thats entirely disappeared from Apples main iPhone lineup. For another, it could be an option for parents looking for an iOS device for kids who arent ready for the responsibility of a phone with a cell phone contract and the ability to call anyone theyd like.

How an iPod would power or enhance an AR headset, however, is beyond me.

Our moneys on that, but we thought it was worth at least informing you of the rumor and its implications, as unlikely as they may be. Manager Ange Postecoglou says Leigh Griffiths can "win them back" after he was booed by some Celtic fans during Saturday's friendly defeat to West Ham.
Read more

Presented by Association of American Universities Coming today: a new ranked-choice voting count in the mayors race, this time including most of the more...
Read more

“I am not weak”: Qatari women unsuccessful in first...

Voters chose none of the 26 women who stood for election in Qatar's first legislative elections on Saturday, disappointing candidates who had wanted to lend a voice for women and other Qataris in the Gulf monarchy's political process.
Read more

The virus is spreading rapidly, with many hospitals close to collapse and nearly 300,000 deaths.
Read more

The NYPD Hate Crime Task Force has launched an investigation into an incident in which a group of teenagers reportedly threw basketballs at a 13-year-old Asian-American's head and shouted "Go back to China."...
Read more

Police in New York City reported seven deaths, including a 50-year-old man, a 48-year-old woman and a 2-year-old boy who were found unconscious and unresponsive late Wednesday inside a home.
Read more

Geraldo slams top Biden aide for having a ‘Marie...

Kaepernick, 33, isn't giving on his dream of returning to the NFL and leading another team to the Super Bowl.
Read more

Now open: France, Spain and more get ready for...

Why android is the OS of choice for emergency...

“Corrine Brown was entitled to the unanimous verdict of a jury of ordinary citizens,” the judge wrote.
Read more

But there has been a "distinct improvement" in other parts of the UK, retailers say.
Read more

Here’s which sectors are set to get the hit the hardest.
Read more

Operation Varsity: How the rich and famous cheated the...

The Tiger King producer on his new film about the scam involving US stars such as Felicity Huffman.
Read more

Britney Spears's father, Jamie Spears, filed a petition on Tuesday to investigate claims his daughter made in her rare court appearance last week.In his petition, the elder Spears requested that the court "investig...
Read more

Wildfires in Russia’s Siberia could endanger a power plant

"I walk a tightrope every day on this, but we've got to fight for it," the BBC director general says.
Read more

The British actor and director has been accused of sexual harassment and bullying, which he denies.
Read more

Jadon Sancho: ‘A talented traiblazer and hybrid of the...

What can Manchester United fans expect from Jadon Sancho, who is returning to England four years after joining Borussia Dortmund.
Read more

T-Mobile CEO apologizes for breach that compromised data of...

T-Mobile CEO Mike Sievert on Friday announced that the hacker behind the recent breach of the company that compromised the information of around 50 million individuals had used “brute force” in the attack and apologized for the impact of the...
Read more

Juicers vs blenders: what’s the difference&quest;

Asian shares held onto their recent gains on Wednesday after last week's pummelling, as global equities rebounded, though the focus for most asset classes was the U.S. Federal Reserve's annual symposium on Friday.
Read more

Madrid slows down vaccine jabs over Easter despite govt...

A Big Question About Rising Wages

Hello. Today we look at the inflation implications of rising wages in the U.S, what’s happening at the factory gate in China and the economic challenges in Sudan and Israel.
Read more

Welcome to Friday, Americas. Here’s the latest news and analysis from Bloomberg Economics to help you start the day:
Read more

In Florida, at least 50 hospitals are at 100% occupancy in their ICUs.
Read more

A Colombian businessman close to Venezuelan President Nicolas Maduro can be legally extradited to the U.S., the top court in the Atlantic Ocean island nation of Cape Verde ruled.
Read more

Soaring Commodities Give CN a Boost as It Awaits...

Canadian National Railway Co. is cashing in on a commodities boom that’s fueling demand for exports from Canada.
Read more

The country records more than 2,000 Covid-related deaths in a single day for the first time.
Read more

Texas Congressman Roger Williams and his legislative aide, Zach Barth, are recovering from the baseball field attack in Alexandria, Virginia. Barth was shot while retrieving baseballs in the outfield, and Williams suffered an ankle injury during the chaos. Wi…
Read more

Watch as Gary Lineker and James Maddison react to Youri Tielemans FA Cup screamer as Leicester City lifted the trophy for the first time in their history with victory over Chelsea at Wembley.
Read more

The Centers for Disease Control and Prevention (CDC) documented a significant drop in routine child and adolescent vaccinations across 10 jurisdictions in the early months of the coronavirus pandemic, spurring concerns of potential outbreaks of vaccine-preven…
Read more

Celebrate Winnie the Pooh’s 95th Anniversary with a Small...

A Winnie the Pooh anniversary without a few willy, nilly, silly ol’ bear surprises is like a pot without a single drop of honey left inside! So today, no Woozles or Heffalumps - we’re celebrating 95 years of our favorite hunny-loving bear with just the right …
Read more

Covid in Scotland: Dingwall Academy closes due to cases

Dingwall Academy, one of the largest in the Highlands, closes after a surge in the number of Covid cases.
Read more

Drought in California, coupled with population growth, is accelerating the need for energy-intensive water projects - driving up greenhouse gas emissions and thwarting the pace of statewide decarbonization effo...
Read more

The number of people dying with Covid-19 in U.S. hospitals appears to have peaked, the latest sign of reprieve after the delta variant...
Read more

Peloton is reportedly working on a heart rate-monitoring wearable

Miami Beach hopes to stem the tide of climate...

Miami Beach has started construction on underground pumping stations to protect the city from flooding caused by rising sea levels and extreme storms. By the year 2100 the sea level could rise as much as four feet in parts of Florida. Some scientific models p…
Read more

Energy secretary: Adversaries have capability of shutting down US...

Energy Secretary Jennifer Granholm (D)  said on Sunday that adversaries of the U.S. have the capability of shutting down the country's power grid. "Yes, they do," she said on CNN's "State of the ...
Read more

The UK's chief medical officers recommend all children aged 12 to 15 are offered one dose of a Covid vaccine.
Read more

‘Dog the Bounty Hunter’ to join in search for...

Ronan Keating and Jermaine Jenas get permanent One Show...

The pair will join Alex Jones on the BBC programme's sofa, each co-presenting for part of the week.
Read more

Xiaomi has launched the Redmi Note 10T 5G smartphone in India that features a 90Hz display, 48MP camera and is available in two variants with 4GB+64GB and 6GB+128GB memory options.
Read more

The paper's closure should be viewed as the end of freedom in the territory, now part of the People's Republic of China.
Read more

Woman banned from keeping horses for five years over...

Reports are rife that Lucasfilm has renamed Boba Fett's ship, Slave I, but it's become a weirdly complicated subject.
Read more

The head of U.S. European Command on Thursday said there is "low to medium risk" of a Russian invasion of Ukraine in the next few weeks.Gen. Tod Wolters said the chances of an invasion, while hinging on a variety o...
Read more

Apple Store Workers to Get Bonuses of Up to...

Apple Inc. will give store employees as much as $1,000 in one-time bonuses next month, a rare move that follows a tumultuous effort...
Read more

Lobbyists’ frustration with BIF uncertainty spills out into the...

“If this vote today was occurring on the merits of the bill, the outcome wouldn’t be in doubt,” said Neil Bradley, the U.S. Chamber of Commerce’s top lobbyist.
Read more

The Realme 8 series, which was launched last night, will go on sale in India today.
Read more

‘You Can Tokenize a Building’ in State Street’s New...

State Street Corp., one of the world’s largest money managers, is moving hundreds of its staff into a new digital unit to meet surging interest in everything from cryptocurrencies to transforming investments as traditional as real estate.
Read more

Death toll rises to 22 in Surfside collapse as...