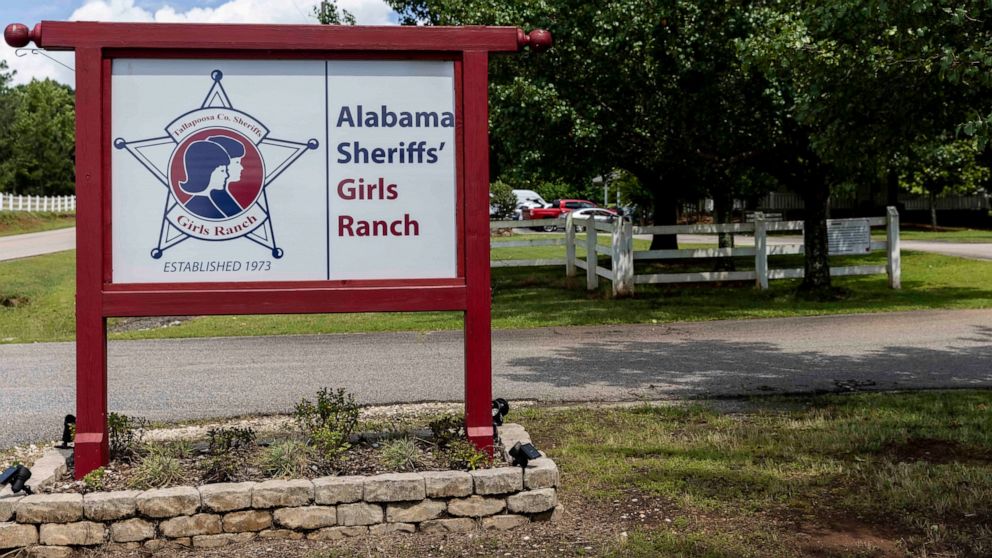 AUBURN, Ala. — A remembrance is set for eight young people killed when a van returning to an Alabama girls home after a week at the beach wrecked in a fiery crash during a tropical storm last month.

The victims of the 17-vehicle accident, which also killed two other people in a separate car, will be remembered in a public service planned for a church in Auburn on Thursday afternoon.

Michael Smith, chief executive of the Christian-based Alabama Youth Homes, said it was time to honor the youths who were killed when the Tallapoosa County Girls Ranch van became entangled in the massive pileup on June 19 at Tropical Storm Claudette blew through the Southeast.

We’re calling it a celebration of life, Smith said. “Were going to celebrate what God gave us while they were with us.

A van driven by the ranch director, Candice Gulley, was carrying eight children ages 3 to 17 when the crash occurred about 35 miles (55 kilometers) south of Montgomery on Interstate 65. Investigators haven’t said what happened, but a preliminary report from the National Transportation Safety Board could be released soon.

Gulley, who lost two children and two nephews in the crash, was the sole survivor in the van and plans to speak at the event, Smith said. A Tennessee man and his young daughter died in another vehicle.

Gulley had taken the group to the Alabama coast for an annual trip sponsored by the girls ranch, which cares for abused and neglected girls and is located about 60 miles (96 kilometers) northeast of Montgomery.

An online fundraising campaign brought in nearly $550,000 for the boys and girls ranches in the state after the wreck. EXPLAINER: Why are Florida waters so dangerous for migrants?

Cindy McCain to be named Biden ambassador to UN...

President Biden is preparing to name Cindy McCain as the U.S. ambassador to the United Nations World Food Programme, according to ...
Read more

"You'd have to be a fool to think this isn't happening," Republican Thomas Massie wrote in a tweet.
Read more

Programming note:  Money Stuff will be off tomorrow, back Monday.
Read more

Sumatra PDF is a wonderful middle ground between too lightweight and too powerful.
Read more

‘I Got Unmatched’: Internet Slams Man Who Pretended to...

"I have a feeling it was not going as well as you thought it was..." one user commented.
Read more

Pasquotank County District Attorney Andrew Womble said deputies were "justified" in their actions because they had reason to believe they were in danger.
Read more

President Biden is slamming Republicans, saying they're "reckless" for refusing to cooperate with Democrats on the nation's debt ceiling. Plus, he's struggling to find an agreement on a key part of his agenda. CBS News senior White House and political corresp…
Read more

Growth in US manufacturing slowed in April from March...

British athletes are told to cut ties with leading US coach Rana Reider as the US Centre for SafeSport investigates multiple complaints of sexual misconduct against him.
Read more

The latest trailer for Pokémon Legends: Arceus doubles down on the game's change in direction.
Read more

All 24 female U.S. senators signed a letter to President Biden urging him to develop a plan to preserve the basic human rights of women and girls in Afghanistan."Lacking a legitimate Afghan government and military...
Read more

The company's oversight board failed to mention one thing in its ruling this week: Facebook's responsibility for making the tools to wield undue influence and power.
Read more

Attorneys for the family of a Black man shot and killed by deputies in North Carolina say an independent autopsy shows that he was shot five times, including a shot in the back of the head
Read more

EXPLAINER: The law and science behind the CDC’s eviction...

Android 12: the good, the bad and the features pinched from Motorola phones  TechRadar
Read more

Four people, including two children, were found dead shot to death at a home that was on fire in Houston Sunday, authorities said.
Read more

Former President Donald Trump's company is in advanced talks to sell the lease for its marquee hotel in Washington, DC, for more than $370 million, according to a person familiar with the matter.
Read more

The House on Friday night passed legislation to reauthorize funding for highway and transit construction programs that lapsed the day before in an effort to avert thousands of worker furloughs and interrupted pr...
Read more

A controversial, far-left state lawmaker in New Mexico who was previously told to “f*** off” by a member of his own Democratic Party announced that he will not seek re-election, according to a report.
Read more

Andrew Brown: Family of black man shot by US...

Andrew Brown's family are calling for the release of all bodycam footage after he died last week.
Read more

The wedding party was disembarking from a boat when several lightning bolts hit the group.
Read more

The woman is accused of displaying a taser during the altercation and helping to hold another child down while he was being beaten, according to officials.
Read more

Over 600 teachers and aides in San Francisco were absent on Tuesday causing every district employee, including the superintendent, with a teaching credential to help cover a class amid a surge in COVID-19 infections...
Read more

In Florida, Santa ditched his nine reindeer and flying sleigh and kicked off Christmas festivities with a surfboard.
Read more

A ‘humble’ Fed ramps up inflation forecast as prices...

Fed Chair Jerome Powell said the central bank still expects rising inflation to subside in the coming months but underscored that he will be watching the data to see if that's wrong.
Read more

After flawless run at MVC, Sue Fulton gets a...

Sutherland died after being taken out of his cell and repeatedly pepper sprayed and tased by deputies.
Read more

The prime minister queries those who think there is something "dodgy or rum or weird or sleazy" about securing more ventilators in a pandemic.
Read more

Survivors of last month's extreme flooding in western Germany have joined first responders, religious leaders and government officials in remembering the more than 180 killed in the disaster and to express hope for the future
Read more

The Senate's top Democrat has laid out his plan to bring voting rights legislation to the Senate floor, which could set up a vote on changing the filibuster.
Read more

Prince Harry is opening up about his life in the royal family. In a recent podcast interview, he discussed his father's parenting style and said he hopes to break the cycle of "pain and suffering." BBC royal correspondent Daniela Relph joins "CBSN AM" with mo…
Read more

Donald Trump took the shooting in Baton Rouge as an opportunity to bash the current administration. Meanwhile, other Republicans are describing the atmosphere at the RNC as solemn and on edge after the shooting. Major Garrett has more.
Read more

Tesco Bank to close all its current accounts

The bank says most of the current accounts have limited activity and are not being used.
Read more

Blinken to appear at House hearing on Afghanistan next...

Secretary of State Antony Blinken will appear before lawmakers on Monday, Sept. 13 to answer questions about the department's role in the evacuation of Afghanistan.The hearing before the House...
Read more

US left Bagram Airbase at night with no notice,...

Jon Kay tells us what is happening ahead of this weekend's G7 summit in just one minute.
Read more

Bonnaroo Music and Arts Festival released the 2022 lineup. The festival will be held in Tennessee for the first time in two years.
Read more

Rights for Irish employees to ‘disconnect’ outside working hours

A new code of practice protects workers from the expectation that they are always available.
Read more

Lenovo's EOFY 2021 deals include huge discounts across its range of laptops, including Yoga Duet 7i, ThinkPad X1 Nano and more.
Read more

Neeva is an ad-free search engine that requires you to login and pay for the service.
Read more

Italy bans hunting, other activities in regions hit by...

Scottish FA ask Uefa if they can have fans...

Uefa will decide "in due course" if fans can attend the Scottish Cup final at Hampden, after they received a request from the Scottish FA.
Read more

Viewpoint: Why Ethiopia’s Tigray region is starving, but no...

Despite mass starvation in northern Ethiopia, aid officials are not calling the situation a famine.
Read more

Spain gets ready for weekend of very hot weekend...

People in Spain are preparing to stay as cool as possible as forecasts showed weekend temperatures could rise above 40 degrees Celsius, or 104 degrees Fahrenheit, in large parts of the Iberian Peninsula
Read more

One person was killed and 14 others were injured in a shooting at a bar in Saint Paul, Minn. early Sunday.According to the Saint Paul Police Department, officers responded to the scene on West 7th Street around 12:...
Read more

The Latest: Some German voters struggle to pick next...

Voters are delivering a mixed verdict on the era of outgoing Chancellor Angela Merkel as they choose a new German parliament, and some are struggling with the choice of potential new leaders
Read more

Prisoners are being released with nowhere to live prompting requests for tents and sleeping bags.
Read more

Get a massive, stylish TV for less in this...

Buy a 75-inch Samsung The Frame for less in this brilliant TV deal at Currys, which slashes £300 off the price.
Read more

Although Hamas claims the cease-fire as a victory, civilians in the Gaza Strip remain skeptical as they come to terms with lives lost and infrastructure ruined. The Palestinian death toll is over 240, including 66 children. Holly Williams has more.
Read more

“It seems cause-and-effect,” Chris Miller said in an interview with VICE on Showtime.
Read more

The Dow Jones Industrial Average dropped 900 points on Friday amid fears over the new COVID-19 variant.While the Dow dropped 2.5 percent, the S&P 500 dropped 1.9 percent and the Nasdaq slid 1...
Read more

The Chicago Teachers Union has narrowly voted Wednesday evening to approve a safety agreement between the union and the district supporting in-person classes.
Read more

Realme Watch 2 Pro will launch in India in the coming months. It comes with a built-in GPS, a large screen, and 90 sports modes.
Read more

Bill Maher hits back at Whoopi Goldberg over ‘Black...

HBO host Bill Maher fired back at "The View" host Whoopi Goldberg on Friday after Goldberg criticized his comments regarding the NFL playing "Lift Every Voice and Sing," known as the Black national anthem, before games....
Read more

Mr. Biden will travel to Howell, Michigan, and visit a training facility for the International Union of Operating Engineers.
Read more

Police were called to West Drayton in the early hours of Tuesday morning.
Read more

"A tsunami has been confirmed and some impacts are expected," the National Weather Service said​ early Saturday.
Read more

The Chinese Communist Party has cracked down on events commemorating the 1989 massacre. The party also says that only 200 citizens died in the event—a British source says the number is closer to 10,000.
Read more

‘My daughter made me fall back in love with...

Lizzie Deignan says she is a "stronger" person ahead of the Tokyo Olympics, after a "horrific" experience at Rio 2016.
Read more