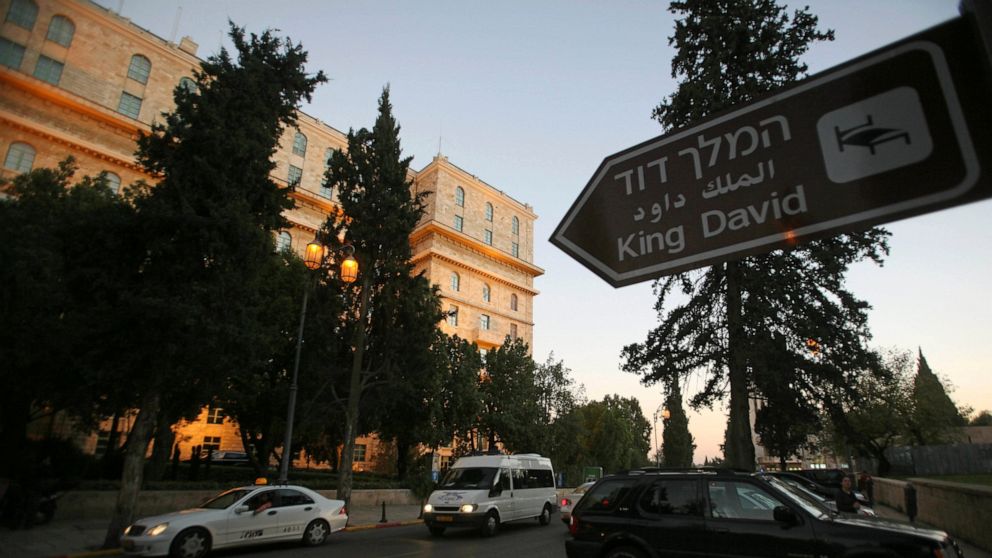 JERUSALEM — President Joe Biden’s dash through Israel and the occupied West Bank this week is expected to cut across some of the region’s most iconic places.

Both luxurious and grueling, Biden’s visit starts with a VIP arrival at Israel’s main commercial airport an on-and-off nightmare for regular travelers this summer due to huge lines and delays and pings through Jerusalem and the West Bank.

Most of his travels are focused on business. Upon arrival, he will get a close-up look at Israel’s advanced missile-defense technology. The threat of Iran’s nuclear capabilities and the 2022 U.S. midterm elections shadow the whole exercise as Biden steps back on the world stage in his first visit to the region as president.

But in between meetings with Israeli and Palestinian leaders, he will visit an array of well-known sites while staying at a historic Jerusalem hotel. Here’s a look at some of the expected highlights of Biden’s tour before he flies off to Saudi Arabia on Friday.

The King David Hotel is fully booked this week for Biden and his retinue of hundreds of staff, security and journalists.

Its Bidens first time as president bedding down behind the buildings iconic pink limestone façade, which overlooks the domes and minarets of Jerusalem’s Old City.

The King David has been a witness to and sometimes a participant in Israel’s history.

It was opened in 1931, when the area was still governed by British mandatory authorities. A bombing by a Zionist militant group in 1946 struck its southwest facade, killing 91 people. After Israeli independence in 1948, it overlooked a valley in no-man’s land.

Egyptian President Anwar Sadat and Israeli Prime Minister Menachem Begin were photographed having a tense dinner in 1977 ahead of the Camp David Peace Accords.

Hollywood has been here, too. Movie stars Elizabeth Taylor and Richard Burton reportedly quarreled in public during their stay. Scenes from the 1960 movie Exodus were filmed in the gilded lobby and on the hotel’s fancy terrace.

Presidents going back to Richard Nixon have stayed at the King David. Dozens of kings and prime ministers also make the hotels client list.

Tiles that span the buildings first floor bear images of the signatures of luminaries, from Madonna to former President Donald Trump, former Secretary of State Hillary Clinton and former California Gov. Arnold Schwarzenegger. A stairwell behind the reception desk doubles as a gallery of famous faces in the house, including a priceless image of then-U.S. President Jimmy Carter in shorts as he returned from a morning jog.

All that history and the sweeping views dont come cheap. The 153 square-meter (1,600 square-foot) presidential suite goes for more than $3,800 a night the week after Biden leaves, according to the hotels web site.

Biden on Wednesday will stop at Israels Holocaust museum, Yad Vashem, which memorializes the 6 million Jews killed during World War II by the Nazis and their allies.

The spike-shaped building in Jerusalem tells the story of the Holocaust emphasizing the experiences of the individual victims. It’s about 180 meters (591 feet) long and slashes through a mountain, its upper edge protruding through the ridge.

Biden will rekindle the Eternal Flame and lay a wreath on a slab over a spot where ashes from the extermination camps are buried, the museum said.

Hell also meet with two survivors, Rena Quint of the former Czechoslovakia and Giselle Cycowicz of Poland in the Museum of Holocaust Art.

FROM THE WHITE HOUSE TO THE PRESIDENT’S RESIDENCE

U.S. and Israeli flags have been ironed and displayed. A long red carpet has been rolled out. A stage has been built.

Such are the preparations at the President’s Residence in Jerusalem, where Israel’s Isaac Herzog will present Biden with the country’s highest civilian award. The Presidential Medal of Honor has been awarded since 2012 to 26 people who have made an extraordinary contribution to the State of Israel or to humanity through their talents, their service, or in any other way, according to the government.

Herzog’s office said Biden has proven himself over a half century in American public service to be a true friend of the whole Jewish People. Other recipients include former President Barack Obama. Biden served as his vice president.

Home to Israel’s president since 1971, the residence sits in an upscale Jerusalem neighborhood on about 2.5 acres (1 hectare). Israel’s third president, Zalman Shazar, asked that it be situated in accordance with the biblical verse, Among my own people I dwell.

Biden is expected to cross to east Jerusalem to visit Augusta Victoria Hospital for a meeting with the heads of six hospitals that serve Palestinians in the area.

Two Palestinian officials said that Biden is expected to restore the $25 million that Trump cut in 2018 after his recognition of Jerusalem as the capital of Israel. They spoke on condition of anonymity pending the formal announcement.

The Palestinians claim east Jerusalem, captured by Israel in 1967, as the capital of a future state and Biden’s visit to a Palestinian hospital in the area carries deep symbolism. Israel has annexed east Jerusalem in a move that is not internationally recognized.

Augusta Victoria Hospital opened in 1910 and provides specialized cancer and dialysis treatment to east Jerusalem and the occupied West Bank as part of a six-hospital network.

Biden is looking to shore up relations with the Palestinians after he has struggled to unwind some of Trump’s foreign policy in the Mideast.

He is to wind up his visit by meeting Palestinian President Mahmoud Abbas in the West Bank town of Bethlehem. He also plans a stop at the Church of the Nativity built at the spot where Christians believe Jesus was born.

Biden is expected to visit with the athletes participating in the Maccabiah Games at Teddy Stadium on Thursday in Jerusalem.

Also known as the Jewish Olympics, the games are the country’s largest sporting event. Olympian Mark Spitz is the games’ most recognizable claim to world fame. He swam in his first international competition at the 1965 Maccabiah Games and returned four years later in preparation for his dominant performance in the 1972 Olympics.

Once every four years, Israeli and Jewish athletes from all over the world compete in their events. This years games, slated to take place over a two-week period, are expected to draw some 10,000 athletes from 60 countries, competing in dozens of sports.

The Glorious Utility of the Mid-Range Phone

How an AP reporter broke the Tuskegee syphilis story

China Is Using Economic Coercion as Blackmail. The US...

Feng shui tips for the bedroom: Benefits and what...

Russia should not be branded terrorism sponsor, Biden says...

Florida is the only state to skip pre-ordering Covid-19...

Samburu: The fight against child marriage

Zara Billionaire Bets $700 Million in Move Into US...

U. of Michigan agrees to settle students’ sex-abuse lawsuit

Stuck Brits scramble to get home after axed flights

Amazon’s star-studded The Boys spin-off gets an outrageous new...

President Biden admits he was given prepared list of...

Marshal of the Supreme Court asks Maryland officials to...

Russia targeted Ukrainian ammunition to weaken Kyiv on the...

Trump vs. James — and Pelosi vs. Raskin

A supermoon is illuminating the skies this week. Here's when to see...