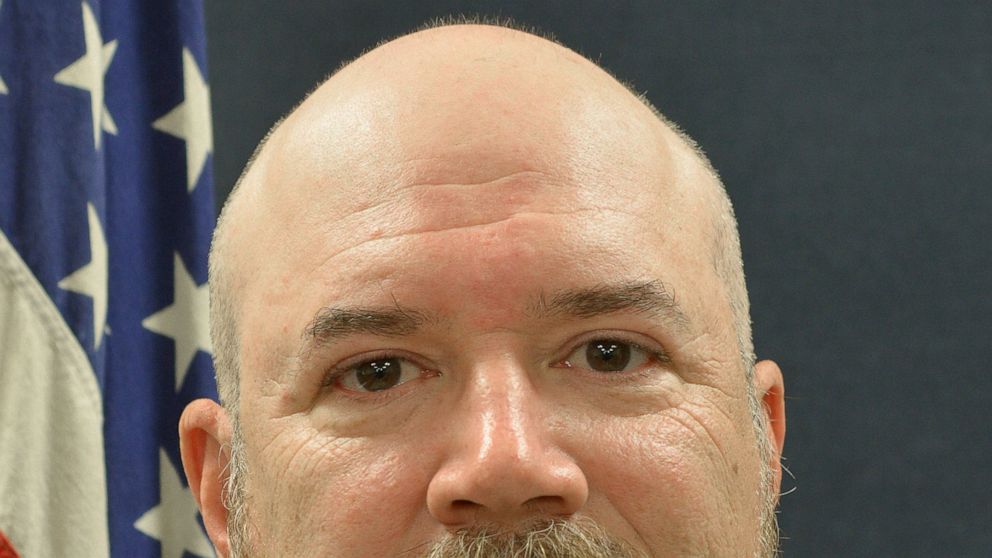 TERRE HAUTE, Ind. — Hundreds of police officers have joined mourners at the funeral for an Indiana officer who was fatally shot during what authorities say was an ambush outside an FBI field office.

The funeral Tuesday for 53-year-old Terre Haute police Detective Greg Ferency was held at Indiana State Universitys Hulman Center basketball arena. Several hundred people attended a visitation at the arena on Monday for Ferency, who was a 30-year police veteran.

According to authorities, a man threw a Molotov cocktail at an FBI office in Terre Haute on Wednesday and then ambushed Ferency, who was a member of a federal task force, by shooting him when he emerged from the building.

Ferency and an FBI agent also fired on the man, 44-year-old Shane Meehan, who was wounded and is charged with premeditated murder of a federal agent, authorities said. Investigators havent disclosed a possible motive for the attack. Police launched a major search operation to find the baby who is subject to child protection rules.
Read more

Alabama Gov. Kay Ivey says the state is shifting to personal responsibility in the fight against COVID-19
Read more

Your next iPhone may finally ditch Lightning for USB-C...

If Apple wants to continue selling smartphones in Europe, it may have to drop Lightning from its new models.
Read more

Match of the Day pundits Danny Murphy and Dion Dublin analyse Phil Foden's impressive display against Aston Villa after the Manchester City star helped his side to a 2-1 victory.
Read more

How the attorney general pans to protect voting rights

A Third of Shark and Ray Species May Face...

Possible DeSantis opponent: Florida is ‘no longer a free...

Black Exits as Apollo CEO Ahead of Schedule, Cedes...

Leon Black, the Wall Street billionaire who appeared to be a main client of disgraced financier Jeffrey Epstein, is stepping down as chief executive of Apollo Global Management Inc. months ahead of schedule.
Read more

Netflix’s Marriage or Mortgage Is Maddening

The streaming service's latest glossy reality show is so ill-suited to the present moment, you might find yourself yelling at the TV.
Read more

Moto Tab G20 leak suggests this could be one...

Motorola appears to have an affordable tablet on the way, and the first image and specs have leaked.
Read more

When classes start this fall at Texas Christian University, the school will no longer have freshman students, according to a report.
Read more

Speaker Nancy Pelosi (D-Calif.) said on Sunday that it "seems self-evident" that the final price tag for the Democrats' spending plan would be smaller th...
Read more

Ivanka Trump Panned After Vivica Fox Accuses Her of...

Bill and Melinda Gates announce they are ending marriage

Ethiopia Set to Carve Out an 11th State After...

Ethiopians in the south of the country have voted almost unanimously to have their own state, part of a push for increased autonomy that’s intensified since Prime Minister Abiy Ahmed took office in 2018.
Read more

Inspired by the Covid vaccine, a woman is calling for a similar focus on a breast cancer cure.
Read more

French President Emmanuel Macron said on Tuesday that by 2030 France must be a leader in carbon-free power production, and will build one small modular reactor as well as two megafactories for the production of green hydrogen by then.
Read more

Mystery tree beast turns out to be croissant

Polish animal welfare officers responding to a call discover the creature is in fact a pastry.
Read more

Horse riding centre for disabled priced out of Teddington...

Park Lane Stables has been at its location in south west London for 13 years.
Read more

Moussaoui trial revisited on the eve of Sept. 11...

A judge and lawyers in the case against the only person ever convicted in a U.S. court in connection with the Sept. 11 attacks recalled the difficulties in bringing that case to trial
Read more

U.S. Vice President Kamala Harris' visit to Guatemala faced minor delays after her plane had to return to Joint Base Andrews in Maryland due to a technical issue, a spokesperson for Harris said on Sunday.
Read more

Watch as Mark Wood dismisses KL Rahul early on day four of the second Test at Lord's, forcing the India batsman into hitting an edge towards Jos Buttler.
Read more

Australia is forecast to reap record revenue from farming this year despite pandemic challenges, a mouse plague and a trade dispute with China
Read more

Chipotle to Raise Average Wage to $15 an Hour...

Chipotle Mexican Grill Inc. is raising its average wage to $15 an hour as it moves to hire 20,000 workers across the U.S., joining a growing number of companies reconsidering worker pay amid widespread labor shortages.
Read more

Exclusive: US businesses warn crumbling infrastructure is hurting the...

As infrastructure negotiations between the White House and a GOP Senate group broke down this week, business executives are warning that aging infrastructure is holding America back.
Read more

Cambridge win the Women's Boat Race by less than a length in a contest moved to Cambridgeshire because of the coronavirus pandemic.
Read more

RNC warns it will advise presidential candidates against future...

Anti-Taliban resistance group says it has thousands of fighters

The group says it wants to pursue peace, but if that fails it claims to have thousands of fighters ready.
Read more

The charges come just a day before the 22-year-old is scheduled to appear in court for a status hearing.
Read more

Yale University's Vinland Map, which has stirred up its share of controversy over claims it was the earliest depiction of the New World, is a fake, the school said.
Read more

About 2 million people have watched a video showing the unorthodox DIY fix used by the previous owners of a woman's home.
Read more

Alleged Jeffrey Epstein victim Virginia Roberts Giuffre filed a lawsuit against Prince Andrew, Duke of York on Monday, accusing him of sexually abusing her when she was still under 18.The lawsuit, filed in New York...
Read more

More US citizens, permanent residents leave Kabul  It's Friday, welcome to Overnight Defense & National Security, your nightly guide to the latest developments at the Pentagon, on Capitol Hill and beyond. Subscribe here: thehill.com/...
Read more

The 10 best Memorial Day mattress sales that have...

Quicktake “Take the Lead”: This is news for the new media. Watch global stories and go deeper with original shows on business, technology, politics, and culture. (Source: Quicktake)
Read more

Rare COVID-19-linked syndrome in kids possible in adults too,...

While research into the specific cause of multisystem inflammatory syndrome in children (MIS-C) is ongoing, a new case report suggests that it may also appear in adults who have a history of COVID-19 diagnosis or exposure.
Read more

Indonesian police are looking into the death of a politician from Sulawesi island who opposed a gold mine project there, after environmental groups and the human rights commission called for an investigation.
Read more

"Amid all of this, violence is never far away," Morita told "Face the Nation."
Read more

Officials announced on Monday that a facial recognition system that was used to identify demonstrators at Lafayette Square in Washington, D.C. last year will be ending this summer.
Read more

Why Demi Lovato’s nonbinary revelation is so important — in...

Small businesses are reaching out for support as they emerge from the coronavirus pandemic.
Read more

The anti-Semitism commissioner urges authorities not to allow protesters to "relativise" the Holocaust.
Read more

Blinken stresses US resolve in call with Russian diplomat

Retired Admiral James Winnefeld, a former vice chair of the Joint Chiefs of Staff, talks to CBSN about how President Trump's approach to Afghanistan compares to past administrations.
Read more

Less than a month after 9/11, the United States invaded Afghanistan, where Al-Qaeda planned the attacks. The war lasted nearly 20 years and became America’s longest war and cost the lives of more than 2,200 American service members. The U.S. withdrew its fina…
Read more

Everybody's favorite antihero is trapped in a bureaucratic nightmare in this madcap Disney TV show. You can now watch Loki online thanks to Disney Plus.
Read more

Covid: Lifting all restrictions in one go is ‘reckless’,...

Boris Johnson has urged caution as most legal rules on social contact are lifted in England.
Read more

United Nations confirms its systems were breached this year

The United Nations (UN) on Thursday confirmed that it was the victim of a cyberattack earlier this year and that attacks related to the original breach were ongoing.The announcement was made in response to a report from Bloomberg News Thursday that...
Read more

California oil spill shows why we need the climate...

We can succeed where others failed in 2010. A victory can come just in time to send President Biden to the United Nations Climate Conference in Glasgow with a strong hand to play for winning greater global climate ambition.
Read more

Eddie, who is about six months old, escaped the day after arriving and was last seen outside a village pub.
Read more

Biden will let Breyer decide when to retire, aide...

A man attacked two people on Regent Street before entering a pub to assault two others.
Read more

Coldplay’s Chris Martin says lockdown made him confront his...

The stars says the lockdown forced him to ask: "Who am I without Wembley Stadium saying, 'you're awesome'?"
Read more

The former speaker of the Iranian parliament Ali Larijani demanded on Saturday an explanation from an election watchdog on why he was barred from running in next week’s presidential vote.
Read more