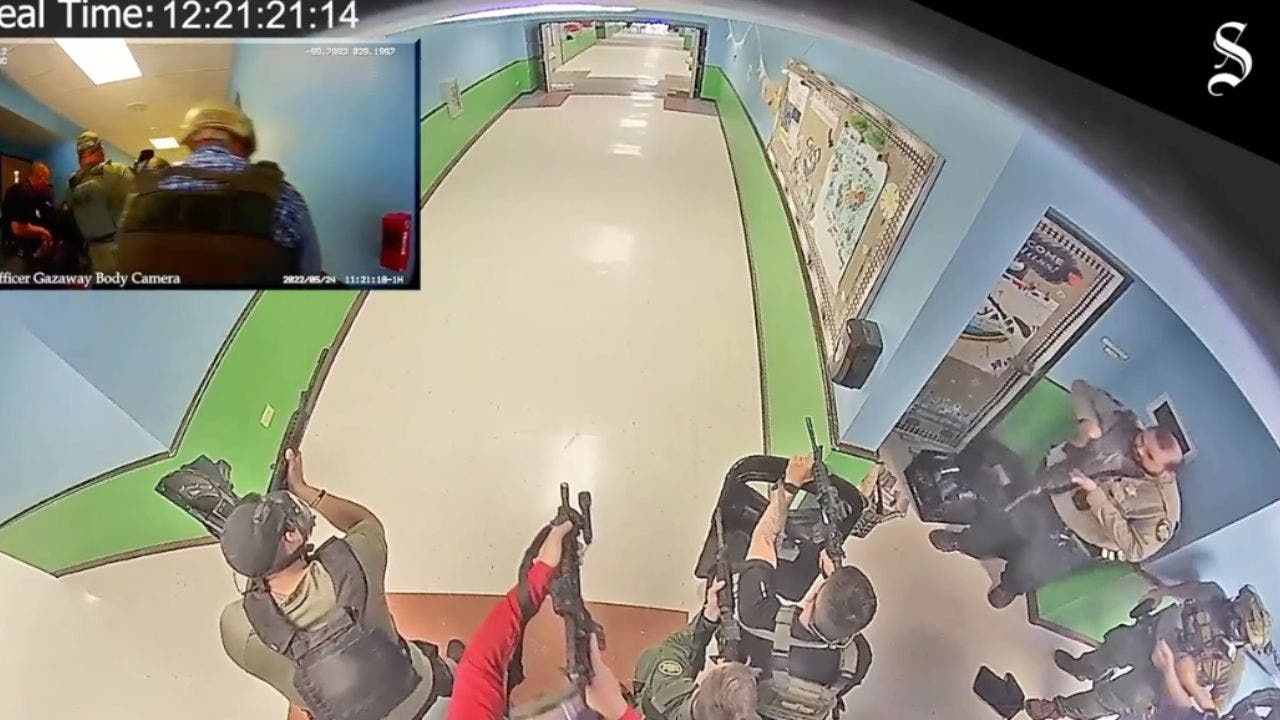 Portions of surveillance footage of the Robb Elementary School shooting were published by the Austin American-Statesman and KVUE on Tuesday ahead of a planned release by officials on Sunday.

The footage shows the gunman, who authorities have identified as 18-year-old Salvador Ramos, firing multiple shots from an AR-15 style rifle outside the school, then entering the building at 11:33 a.m. and shooting his way into adjoining classrooms.

A barrage of more than 100 bullets were fired inside those two classrooms over the next two-and-a-half before seven officers ran into the school at 11:36, two of them armed with rifles and four others armed with handguns.

Officers were on the scene before the gunman entered the school, as one officer had the suspect in his rifle sights and asked permission to shoot, but the supervisor either didn’t hear the request or didn’t respond in time, allowing the suspect to enter the school, according to a report released by the Advanced Law Enforcement Rapid Response Training Center.

Regardless, the gunman appeared to fire from inside the classroom at 11:37 at the officers, who retreated back down the hallway.

Ballistic shields arrived at 11:52 a.m. and 12:04 p.m., along with other officers armed with rifles, bulletproof vests, helmets, and other tactical gear.

At 12:21 p.m. officers walked down the hallway to position themselves closer to the classroom doorway. At 12:30, an officer can be seen walking over to a hand sanitizer dispenser and disinfecting his hands.

The classroom door was finally breached at 12:50 p.m., 74 minutes after the first officers entered the school.

“Three minutes after the suspect entered the west building, there was a sufficient number of armed officers wearing body armor to isolate, distract, and neutralize the subject,” McCraw told a special Texas senate committee that is investigating the shooting last month.

“The only thing stopping a hallway of dedicated officers from entering Room 111, and 112, was the on-scene commander, who decided to place the lives of officers before the lives of children.”

“Every briefing, he leaves out the number of his own officers and rangers that were on scene that day. He leaves out that during this time, every other classroom in the building was safely evacuated by Uvalde peace officers with the assistance of Border Patrol,” McLaughlin said at a Uvalde City Council meeting on June 21.

Rep. Dustin Burrows, the chairman of the House committee investigating the shooting, said before the local news outlets published the footage that he would show the full video to the Uvalde community on Sunday followed by a full public releases.

“While I am glad that a small portion is now available for the public, I do believe watching the entire segment of law enforcements response, or lack thereof, is also important,” Burrows tweeted, noting that he was disappointed that victims’ families didn’t get to see the video first.

McCraw also said he was “deeply disappointed this video was released before all of the families who were impacted that day and the community of Uvalde had the opportunity to view it.”

“This video provides horrifying evidence that the law enforcement response to the attack at Robb Elementary on May 24 was an abject failure,” McCraw said in a statement on Tuesday. “In law enforcement, when one officer fails, we all fail.”

Paul Best is a reporter for Fox News Digital. Story tips can be sent to [email protected] and on Twitter: @KincaidBest.

Texas inmate who fought prayer, touch rules to be...

Beats is rolling out some handy features for Android...

A £52-Billion Jump in Mortgage Costs Fuels Risk for...

The Morning After: Connected dumbbells that Amazon’s Alexa can...

Dyson’s new Airwrap fixes one of its predecessor’s biggest...

US airport finds gun stuffed in chicken by traveller

Gutfeld: The Brothers Cuomo and leftist media are ‘phonies’

Here’s how to stream the 2022 Super Bowl

Windows 11 gets a much-awaited fix for gaming bug

Wall Street closes down on slide in Apple shares,...

Pardons, pressure and probes: Inside day 5 of the...

Pence to spotlight Chinese provocations at high-profile summit in Seoul