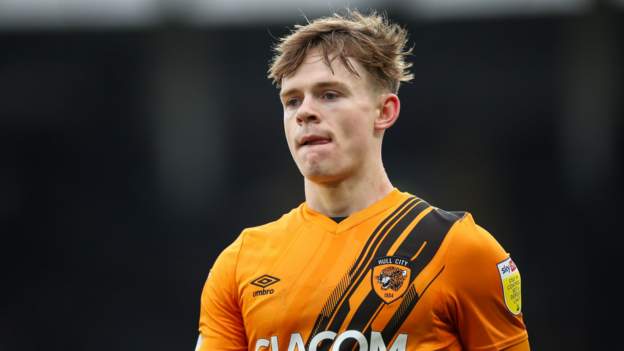 Brentford have signed Hull City forward Keane Lewis-Potter on a six-year contract for an undisclosed fee.

The 21-year-old left Hull’s training camp in Turkey on Monday and flew to London to complete a medical and agree personal terms.

Brentford initially tried to sign the England Under-21 international last summer and again in January.

He becomes the Bees’ second signing of the summer after defender Aaron Hickey joined from Bologna.

Lewis-Potter, who has four England Under-21 caps and one goal, had been at Hull since signing as a schoolboy in 2015 and scored 13 times in 47 appearances for the Championship side last season.

Brentford boss Thomas Franks says his new signing, who has the option of another year on his deal, was one of the “biggest young talents” in the second tier last season.

“We have a player who scores his goals by arriving in the box and attacking the last line,” said Frank.

“He gets in the position to convert the chances made for him. He is a flexible player, he can play both sides, as a striker and as a ten if we want to do that. He has a very good mentality.

“He fits the Brentford model perfectly.”

Frank’s side, who finished 13th in the Premier League in their first season back in the top flight since 1946-47, are expected to miss out on re-signing midfielder Christian Eriksen.

The Danish midfielder is expected to join Manchester United on a free transfer.

The signing of Lewis-Potter could mitigate the loss of Eriksen whose goals and assists helped Brentford fight a relegation battle when he signed for the west London club in January. Google might actually be the best friend for open-source...

Overturning Roe isn’t only about red states or abortion

Opinion: The unseemly spectacle over the January 6 attack...

Nebraska congressman found guilty of lying to FBI about...

CNN poll: Most Americans want US to do more...

The best Prime Day deals at other retailers: Best...

Many Americans don’t know what to make of the...

Uvalde: Visitations, funerals and burials, one after another

Why Starbucks stopped rewarding its stockholders

How KFC in Kenya got fried over its chip...

Amnesty accuses Israel of subjecting Palestinians to system of...

States appeal dismissal of suit against U.S. archivist for...

US says Horn of Africa envoy stepping down ‘in...

Death on the Nile

Love Island: Second hand clothes and the trouble with...

EXPLAINER: How China is using metal barriers to fight...

A Google Pixel 7 Pro prototype has already been...