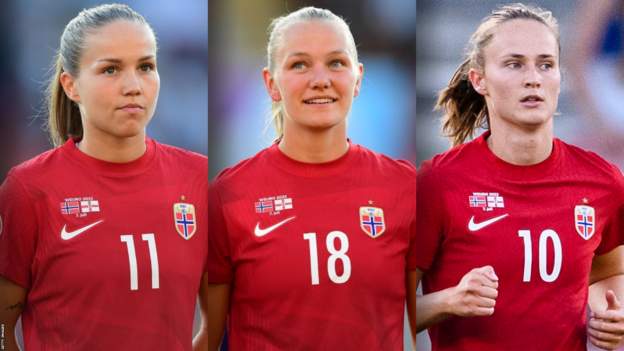 England’s biggest test of the Euros group stages is set to come on Monday when they face a Norway side containing inaugural Ballon d’Or winner Ada Hegerberg – but who else do they need to be wary of?

Barcelona forward Caroline Graham Hansen, widely considered as one of the world’s best, also netted in their impressive 4-1 win.

“They had a pretty good start didn’t they?” reflected England striker Ellen White. “I went out to get food and they were 2-0 up!”

“They are a phenomenal team. It’s a really tough group. We’ve watched them and analysed them and we’re fully focused on what we can do. It’s a big, big game for us and we’re excited.”

Who could cause England problems?

One player who is sure to cause problems against England is Chelsea’s Reiten, who scored with a superb, curling free-kick on Tuesday evening.

Reiten, who has won three Women’s Super League titles and made the PFA Team of the Year last season, could come up against several of her club team-mates in the England side, including defender Jess Carter.

“Guro is tremendous on the ball. She’s got a wonderful left foot and I think she’ll be a threat going forward,” said Carter.

“But in my opinion, she’s nothing that our England team can’t handle. We’ve shared our top tips on her and hopefully the girls will take that into the game and defend as best they can.”

Carter is also hoping Norway skipper Mjelde, who has returned following an anterior cruciate ligament injury, will not be “up to scratch” against England.

“She’s a phenomenal player but she’s obviously not long come back from injury and played as many games,” added Carter.

“Maybe that’s a slight advantage but she’s a top professional, so composed and relaxed. She reads the game so well.”

City midfielder Blakstad, who joined the club last summer, is an exciting young talent who has become a regular in the Norway side.

“She scored a great goal [against Northern Ireland],” said club team-mate White. “She’s a lovely person and a great talent – and still so young.

“She’s got great speed and she’s been a great addition to Norway and City. It’s going to be exciting to see her at this tournament.”

And while England head coach Sarina Wiegman’s side have lots of insight on Norway’s WSL talent, one player Carter hopes will have a quiet game is Graham Hansen.

The Barcelona forward scored in their Champions League final thrashing of Chelsea in 2021.

“Everyone knows she’s a top player and incredible at dribbling. She’s one of the best players I’ve come up against personally,” said Carter.

“If I come up against her again I will be more tight, more aggressive, and do my best to keep her as far wide as possible. We’ve got a lot of experience in the squad and we’re good enough defensively to deal with her.

How can England stop Hegerberg?

Even with all their talent elsewhere, the return of Hegerberg to the Norway side after a five-year absence has taken them to another level.

“I’m sure for Norway it’s great to have Ada Hegerberg back in the team. She is physical and her movement is incredible,” said White.

“You want to see the best players playing in these tournaments, you want this talent on the pitch and to be playing against the best of the best.”

England defender Millie Bright said: “It’s great to see her back. It lifts the game. She is an exceptional player and as a defender – what a challenge to come up against.”

One Lioness who has inside knowledge of Hegerberg is Barcelona full-back Lucy Bronze, who played alongside the 27-year-old at Lyon.

“She’s obsessed with scoring. The thing that separates her is that crazy mentality. You can’t really get in her head but I will try!”

Carter said: “She’s a great player but I think we’ve got some exceptional defenders in this team. I’m sure that between us all we’ll be able to figure out our best tactics to try and keep her as low key as possible.” DOJ releases memo behind Barr’s decision not to prosecute...

God of War: Ragnarök dev promises ‘something cool is...

Russia, Stalled on Battlefield, Might Seek to Bankrupt Ukraine:...

Iran Says Oil Sales Have Had a ‘Staggering’ Rise...

Aaron Rodgers apologizes for ‘shrapnel’ of COVID-19 remarks: ‘I...

How to Reach Net Zero Profitably

Tropical Storm Alex, the first named storm of the...

Council’s first ever female leader to step down

Microsoft could be planning a rather pricey cybersecurity upgrade

Ukraine top of agenda as China, EU prepare to...

William Lee on the Fed (Radio)

The history of surfboard design

Family of Little Leaguer who suffered severe injuries after...

William Ruto: How Kenya’s new president is influenced by...

A man’s quest to stop the decline of orcas

Turkey to forge on with selective loan policy despite...

WHO declares highest alert over monkeypox

Flutter for web develops: A hype beast or a...