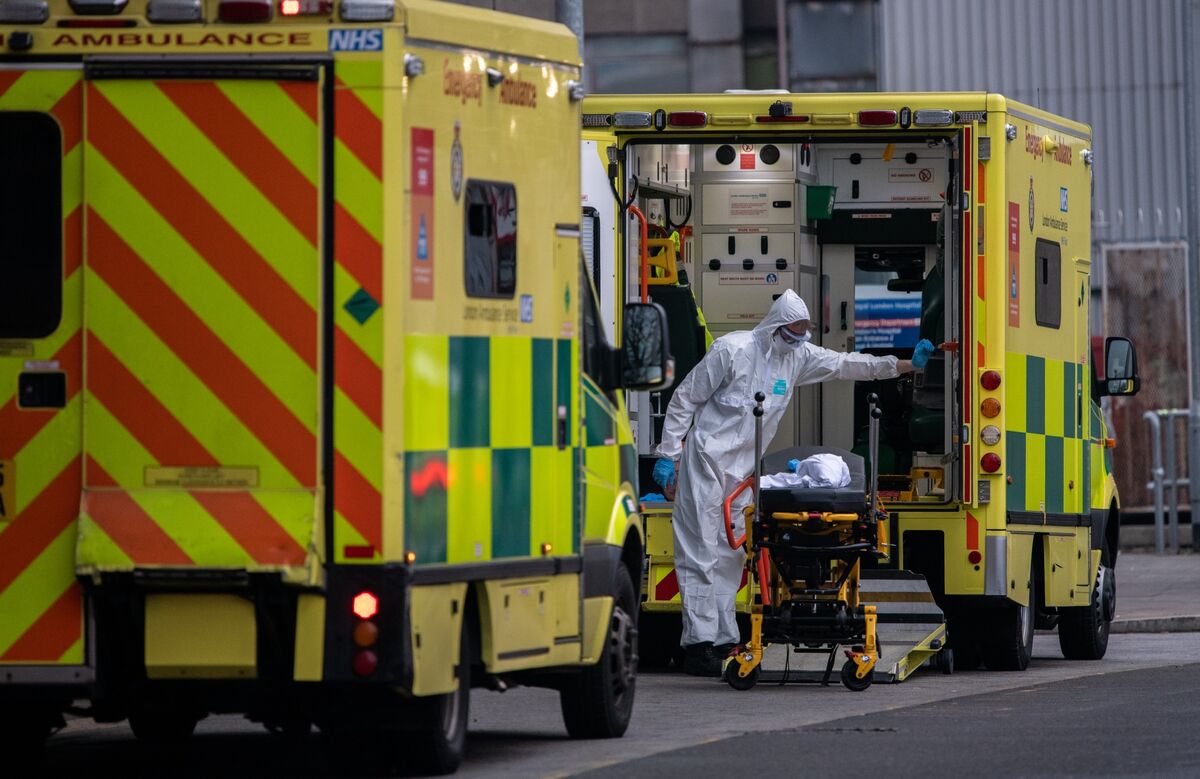 Britains household wealth surged 900 billion pounds ($1.3 trillion) during the pandemic, and much of that went to the richest people, a study by the Resolution Foundation showed.

The figure is well above the Bank of Englands estimate for how much money consumers accumulated during lockdowns that shut most stores and prevented people from traveling. It adds to evidence of growing wealth and income inequalities.

Typical families in Britain are 7,800 pounds better off now than before the pandemic despite the biggest economic recession in three centuries, the research group said Monday. The richest 10% of families enjoyed the biggest absolute wealth increase — more than 50,000 pounds. The poorest 30% of adults are just 86 pounds better off.

Britons across the income distribution saw wealth rise during the pandemic

Note: Resolution Foundation data based on analysis of figures from multiple sources including ONS, YouGov, Bank of England, house price and stock indices

Not all households have benefited from this unlikely wealth boom, said Jack Leslie, senior economist at the Resolution Foundation. The poorest households are more likely to have run down rather than increased their savings, and havent shared in Britains house price bonanza as theyre less likely to own a home in the first place.

More data from the report: Iceland’s central bank governor wants an end to fiscal stimulus there “as soon as possible” to help cool the economy as it enjoys a buoyant post-crisis recovery laced with inflation.
Read more

End of Trumka era has some unions looking for...

Trumka's death presents the AFL-CIO’s 56 affiliate unions with the first real opportunity in more than a decade to change the direction of the powerful national organization.
Read more

As U.S. forces continue their withdrawal from Afghanistan, Taliban fighters have taken over dozens of abandoned bases in recent days – raising questions about the fate of 18,000 Afghan interpreters – who risked their lives to work with the U.S. government.
Read more

The family of Tony Parsons say they still need answers to 'many questions' about his death.
Read more

Each day, more deaths are being linked to the heat wave that struck the Pacific Northwest this past week
Read more

Fujifilm’s X-E4 is the perfect way to get creative...

The new Fujifilm X-E4 is the perfect camera for anyone after no-compromise image quality without the bulk of a DSLR.
Read more

The House committee investigating the January 6 attack on the Capitol is going to enter a more public phase of the probe in the new year. CBS News political contributor Molly Hooper joins CBSN anchor Elise Preston with the latest.
Read more

Three people were arrested in San Antonio on Friday after they allegedly robbed a woman in her home at gunpoint while she was on a zoom call.
Read more

President Joe Biden on Monday called on foreign leaders to protect against those who prey on division and push "phony populism," asserting that it's up to democratic nations to prove to the world that democracy can prevail and autocracies cannot "deliver for …
Read more

This is how mass deforestation is wiping out species...

Deforestation continues to threaten species around the world.
Read more

After finding success with Call of Duty: WW2, Sledgehammer Games will once again take us through the trenches to fight off the Nazi invasion.
Read more

Communities literally came together to recreate the historic rope bridge, meeting in the middle.
Read more

The number of people being treated for Covid in hospital rises the ninth day in a row after a surge in infection rates.
Read more

Indonesia is overhauling state companies and replacing the management teams with professionals and many of the president’s allies amid concern the appointments are politically motivated.
Read more

Blustery winds, chilly temperatures and some snow: Here’s your...

As millions of Americans gear up to travel this Thanksgiving holiday week, forecast models continue to show a temperature roller-coaster and a potential "significant storm" in the coming week.
Read more

Argo AI, the self-driving startup backed by Ford Motor Co. and Volkswagen AG, is considering going public as soon as this year, according to people familiar with its plans.
Read more

Derbyshire's Australia limited-over international fast bowler Billy Stanlake is ruled out for the season after just one game.
Read more

An estimated 80% of households in Lowndes County, Alabama, have no adequate septic system.
Read more

Football star Aaron Rodgers is set to be a guest host of "Jeopardy!" this month.The Green Bay Packers quarterback will join other celebrities in hosting the game show in two-week intervals...
Read more

Walmart to give smartphones to 740K workers

Walmart announced that it will give 740,000 of its employees smartphones as part of a new app initiative. The company ...
Read more

Goyang: How this city in South Korea went cat...

From "dirty thieves in the streets" to pampered pets and social media stars, South Korean cats may be going through even more rapid changes than the country itself.
Read more

A day care center in Nebraska has been linked to 100 coronavirus cases including some from the U.K. variant, according to health officials.
Read more

Durand Jones & The Indications met as college students at Indiana University back in 2012. Four years later, they recorded their self-titled debut album. 2019 brought a breakthrough album, “American Love Call” and now they're out with their latest, "Private S…
Read more

Biden says Manchin, Sinema being confronted by activists is...

President Biden responded to the confrontations Democratic Sens. Joe Manchin and Kyrsten Sinema have faced in recent days amid their lack of support for critical items in his agenda, saying he doesn’t think the tactics used against them are “appropriate,” but…
Read more

Illinois governor fires back at billionaire over criticism of...

Illinois Gov. J.B. Pritzker (D) fired back on Tuesday at billionaire Ken Griffin, a supporter of former Gov. Bruce Rauner (R), over increased crime in Chicago.Griffin, who is the CEO of the multinational hedge fund...
Read more

Why I think Apple Maps could help solve the...

Opinion: The new designs of Safari in iOS 15 and macOS 12 have been polarizing, but Maps could save the day.
Read more

The U.S. government is dangerously close to defaulting on its debt as a split among House Democrats is threatening the future of President Joe Biden's spending plan and the bipartisan infrastructure bill. CBS News senior White House and political corresponden…
Read more

Diana Taurasi has the Phoenix Mercury back in the WNBA Finals for the first time since 2014.
Read more

An 84-year-old man was sentenced to consecutive life sentences in Wisconsin Friday after a DNA match in 2019 helped investigators solve a pair of more than four-decade-old cold case murders.
Read more

Two super PACs released an ad campaign that criticizing Republican Ohio Senate candidate J.D. Vance for past comments he made about former President Trump.Club for Growth said on Saturday that it...
Read more

Leading figures in tennis and sport have rallied to support Naomi Osaka after the women's world number two withdrew from the French Open in a row about post-match media duties, saying she had been suffering from "depression" and "anxiety".
Read more

AMD is trumping Intel in this vital computing market

It’s been five years since Italy played at a major tournament, so it’s come as a surprise to many to see the Azzurri completely transformed into an attack-minded juggernaut resembling the elite of modern soccer.
Read more

Liverpool sporting director Michael Edwards - credited with the Reds' success in the transfer market in recent seasons - will leave the club at the end of the campaign.
Read more

Helen Glover column: Back on British team, training with...

In her first BBC Sport column, Helen Glover explains how her lockdown desire to get fit has culminated in a return to the British rowing team while being a mum to three children under three.
Read more

Frontline members lean in on earmarks

With Melanie Zanona. LEND ME YOUR EARS, AND MONEY: The Cicadas are coming and so are the earmark requests. House members had to submit...
Read more

The USS Milwaukee is staying in port.
Read more

Singapore Expects Recovery to Continue in 2022 on Global...

Singapore’s economy will continue to recover next year as global growth is projected to “remain positive,” S. Iswaran, minister-in-charge of trade relations at the Ministry of Trade and Industry, said Monday in parliament, adding that the ministry plans to re…
Read more

One nurse says the offer is "pitiful" and that people are leaving the profession "in droves".
Read more

For weeks, Rep. Peter DeFazio (D-Ore.), chairman of the House Transportation and Infrastructure Committee, has been howling for cross-chamber negotiations on infrastructure spending to ensure that climate provisions aren'...
Read more

At least 58 prisoners were killed and a dozen injured in overnight violence at Ecuador's Penitenciaria del Litoral prison, the government said on Saturday, in what has been characterized as fighting between gangs.
Read more

Sign up for the New Economy Daily newsletter, follow us @economics and subscribe to our podcast. Economists inflation expectations keep rising as a variety of key metrics underscore...
Read more

Funeral pyres should not be the symbol of India’s...

Many Indians are angry about what they see as Western media bias in the publication of near-daily images of funeral pyres in pandemic reports on the country, writes Shareen Joshi, Not only do these pictures fail to reflect the complexity of India, these inadv…
Read more

The family of an 8-year-old girl who was shot dead in Atlanta last year announced on Monday that they are suing the city, its leaders and the fast-food chain Wendy's, where the shooting took place....
Read more

One non-resident participant in the Paralympic Games has been hospitalised with non-severe symptoms of COVID-19, Kyodo News said on Thursday, citing the Games' organising committee.
Read more

Crude oil has climbed to its highest price in nearly three years as the pandemic recedes and global demand soars.
Read more

Many elderly women have been hospitalized with what they believe is a heart attack, but it's actually what doctors call "broken-heart" syndrome. NYU Langone Medical Center cardiologist Dr. Harmony Reynolds discussed the condition with CBSN's Contessa Brewer.
Read more

CDC to hold ’emergency meeting’ on heart inflammation after...

An advisory panel of the Centers for Disease Control and Prevention will hold an emergency meeting on June 18 ...
Read more

The New York division of the largest union for news professionals is accusing The New York Times of unfair labor practices by forbidding workers from showing support for unionizing. The NewsGuild...
Read more

A crane fell on top of a building in...

A portion of a crane collapsed on top of a building in downtown Toronto, Canada, Sunday afternoon, causing damage to its rooftop.
Read more

Voice cloning of interest to actors and cybercriminals