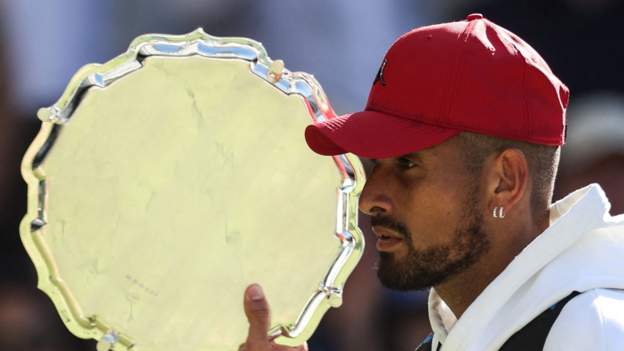 Nick Kyrgios says it feels “ridiculous” to be a Wimbledon runner-up after only deciding on the basketball court recently he planned to “have some fun” at the Grand Slam tournament.

“I look back at it and I’m just like ‘How am I here?’ Like, where I’m from, everything I’ve been through,” he said.

“You know, it’s pretty cool. I’m just not supposed to be here.”

Kyrgios, ranked 40th in the world, has only played a limited number of tournaments since the coronavirus pandemic started in 2020.

Earlier this year, he also opened up about his struggles with depression and self-harming, saying the 2019 Australian Open was one of his “darkest periods”.

He had played only four tournaments in 2022 before committing to the grass-court season, which started in June.

The former world number 13 missed the French Open to have more time at home in Canberra.

He says his ambitions for Wimbledon became clear while he was there with his friends.

“Literally a month ago, month and a half ago, I was actually playing basketball with some boys back home and I said to one of them, ‘I think I’m going to have some fun and maybe win Wimbledon’,” said Kyrgios.

“Then I’m here as a finalist. I didn’t hit more than an hour a day.”

Kyrgios has always been seen as having the talent to win one of the sport’s four Grand Slam tournaments, but many said he never would because of his mentality and tendency to combust on court.

He finally reached his first major singles final after an impressive fortnight at the All England Club.

But that came amid more controversy as it was revealed he faces a court hearing in Canberra next month in relation to an allegation of common assault.

“It’s taken me 10 years, almost 10 years in my career to finally get to the point of playing for a Grand Slam and coming up short,” the former world junior number one said.

“I feel like if I had won that Grand Slam, I think I would have lacked a bit of motivation, to be honest. Coming back for other tournaments, I would have really struggled.

“I kind of achieved the greatest pinnacle of what you can achieve in tennis.”

Kyrgios’ commitment to the sport has often been questioned and earlier this week he illustrated how his professionalism has improved by giving the example of when he “had to be dragged out” of a Wimbledon pub at 4am on the morning of a match against Rafael Nadal in 2019.

“I feel like I’ve committed a fair bit these two weeks. What more can I do, to be honest? I’ve stayed in most of the time,” he said.

“I’ve tried to just get good sleep, eat well. Not even have a beer here or there.

“I was taught that’s all right – even though it sucks. Of course it sucks.”

Kyrgios was playing in his first Grand Slam singles final and revealed he had been sleeping “terribly” because of the anxiety he felt about the occasion.

He said not playing in the semi-finals – because he was given a walkover when Rafael Nadal withdrew with an abdominal injury – also added to those feelings.

On what the four days of build-up was like, Kyrgios said: “It’s just a lot mentally.

“Like the pressure of playing finals at Wimbledon. Am I going to do good? Am I going to behave well for me? Even if it’s support, it’s just a lot. There’s so many things.

“Playing Djokovic is a hard enough task as it is.

“I feel like I lost this match, but I feel like there’s just weight off my shoulders.

“I feel like there’s so much weight on my shoulders all the time when I step out on the tennis court, now it’s just released and I feel amazing. This is the best I’ve felt the two weeks.” Companies ‘foolish’ to not beef up cybersecurity amid Russia...

Rafael Nadal wins his first tournament since returning from...

Chinese court executes man who set his ex-wife on...

Firms Team Up To Make Canada A Global Leader...

Putin’s Coffers Are Swelling Despite Sanctions

Bosnia: Ex-party chief gets 3 years in prison for...

Twitter board approves ‘poison pill’ provision to ward off...

Australia has decided to ‘let Covid rip.’ Is that...

Blistering report finds “systemic failures” by authorities in the...

The Firewalla Purple Helps Control and Secure Your Home...

‘Petty’ Mom Slammed for Complaining About Splitting Bill With...

Remi Wolf is casually rewriting the rules of pop...

The best gaming desks at Amazon, Walmart, Wayfair and...

Olivier d’Assier on the Markets

Against the odds, Fight Camp’s boxing workout is the...