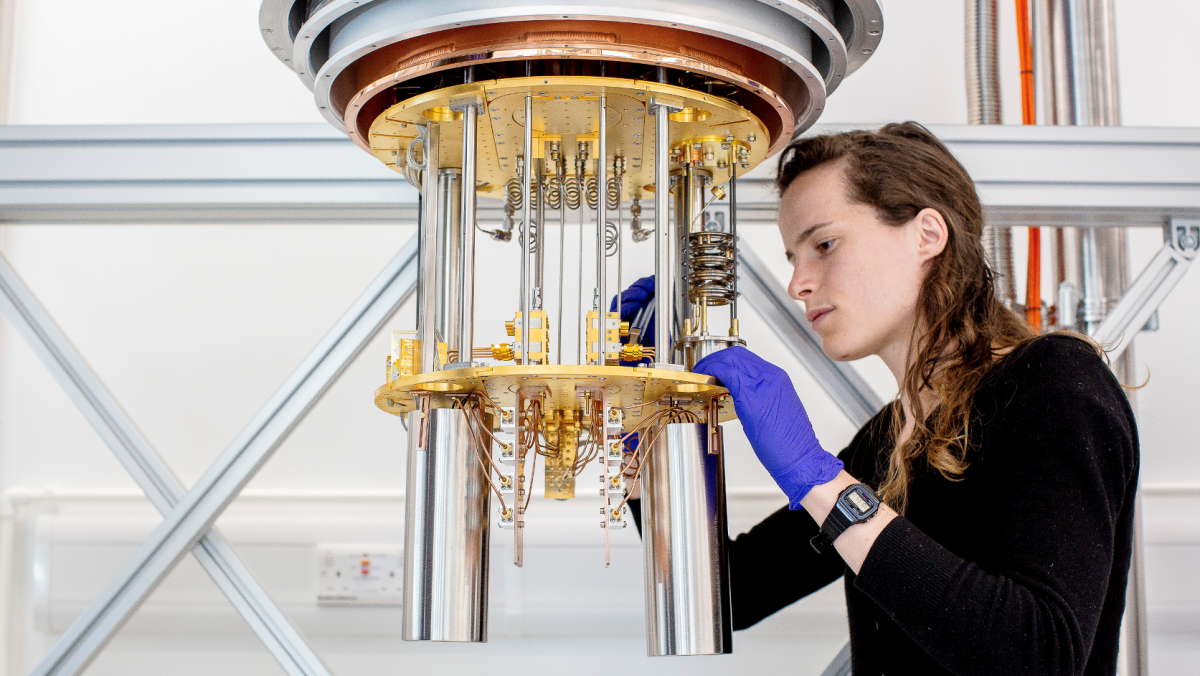 After unveiling the UK’s most advanced superconducting quantum computer back in 2018, Oxford Quantum Circuits (OQC) has announced that it is launching the country’s first Quantum Computing-as-a-Service (QCaaS) platform.

The startup’s new QCaaS platform will likely help boost the UK’s ambitions to be a global quantum superpower while will also making it easier for businesses to explore the increasing commercial and technical benefits of quantum computing.

As OQC tries to become a pioneer of the QCaaS market, this will also be the first time that the company’s proprietary technology is available to the enterprise via its private cloud.

CEO of OQC Dr. Ilana Wisby provided further insight in a press release on how the launch of the company’s QCaaS platform will make quantum computing available to more industries and businesses, saying:

“The launch of our QCaaS platform is not only a remarkable achievement in the history of Oxford Quantum Circuits, but is a significant milestone in unlocking the potential of quantum computing both in the UK and globally. We know quantum computing has the power to be revolutionary but for decades this power and potential has been relatively untested and unverified in the real world. By making our QCaaS platform more widely available to strategic partners and customers, we are offering the worlds leading enterprises the chance to demonstrate just how far-reaching quantum will be within their industries.”

Through its QCaaS platform, OQC will take its proprietary quantum technology to market through a private cloud where strategic partners and customers will be able to further experiment with quantum in an effort to tackle some of the world’s most intractable problems.

The company’s partner Cambridge Quantum will be given first access to its private cloud in order to demonstrate its Iron Bridge cybersecurity platform which will use quantum computers to generate unhackable cryptographic keys. To do this Cambridge Quantum will use one of OQC’s systems named “Sophia” which is hosted at its state-of-the-art lab in the UK.

For those unfamiliar with OQC, the company names its systems after women in STEM and its Sophia quantum computer is named after the British physician Sofia Jex-Blake who led the campaign to secure women’s access to a university education.

Organizations interested in taking advantage of the technical and commercial benefits of quantum computing can sign up here as OQC is now accepting registrations to its beta list. Images have emerged of the upcoming Moto G60, the latest entry in an increasingly crowded G series line.
Read more

Russian military says its troops back to bases after...

The Russian military says that its troops have returned to their permanent bases after concluding massive drills, the maneuvers near Ukraine that have drawn Western concerns
Read more

Asos Pledges to Fill Half of Leadership Roles With...

Asos Plc, the fast-fashion online retailer, said at least half of all leadership roles in the company will be filled by women by 2030 as part of a wide-ranging new sustainability strategy.
Read more

Actress Angelina Jolie says she's "sad" audiences won't get to see her new film "Eternals" after a number of Middle Eastern countries banned it over depictions of a same-sex relationship."How any...
Read more

Veteran who was harassed by Antifa over flag says...

Gabriel Johnson, a retired Marine and the co-founder of the Coalition to Save Portland, explains the current “atmosphere” in the city on “Fox & Friends Weekend” and stressed the importance of investing in public safety.
Read more

Covid-19: Mandatory vaccine passports could be enforced from December

Robin Swann will ask ministers to agree to his recommendation at an executive meeting on Wednesday.
Read more

A former prisoner sprayed a fire extinguisher to try and stop Usman Khan after seeing his 'suicide belt'.
Read more

Everyone was getting along just fine in Christiansburg, Va., until Jim Bohon, who manages the Bridge Kaldro music store, fired the first salvo in what rapidly devolved into a war of signage – taunting neighboring businesses with funny and punny street signs. …
Read more

A Fun Run for Cast Members Designed by Cast...

An Israeli military intelligence officer who died in prison had deliberately endangered a "big secret", the top general said on Wednesday, lifting the veil on a mystery gripping the country.
Read more

This Black Friday is looking like the ideal time...

Unlimited data SIM only deals have crashed down in price this Black Friday, offering the chance to get a massive saving.
Read more

Workers at a General Motors Co. truck plant in Mexico voted to cancel their union contract after the U.S. initiated a dispute against conditions at the factory, a historic victory for the North American free trade agreement.
Read more

Russia will face ‘consequences’ if Navalny dies – US

On The Money: House Democrats cut back Biden tax...

Pope Francis on Wednesday questioned those skeptical of getting vaccinated against COVID-19, pointing to what he referred to as humanity's "history of friendship with vaccines," ...
Read more

The first malaria vaccine to show more than 75% efficacy, a World Health Organization specified goal, has been developed by scientists at the University of Oxford, according to a study published in The Lancet journal.
Read more

How to Travel to a Galaxy Far, Far Away...

I can finally talk about the project I’m currently working on – Star Wars: Hyperspace Lounge – coming to our newest ship setting sail summer 2022. We gave you a first look at this incredible space in our grand reveal of the Disney Wish last week, and today I …
Read more

BMW and Mercedes Start the Year With Worldwide Sales...

Forced to pare down their bill to expand the social safety net, Democrats are now having to make tough calls on what they can cut from the proposal, prompting fresh concerns from members who had been working for years on provisions that once had been included…
Read more

Desperate search for survivors as western Europe reels from...

The number of people killed in the catastrophic flooding across parts of western Europe rose to 157 on Saturday morning, as a desperate search for survivors continues despite rising waters, landslides and power outages.
Read more

Miami Heat player suspended for a week over anti-Semitic...

The league commissioner said Meyers Leonard's language "was inexcusable and hurtful and such an offensive term has no place in the NBA or in our society."
Read more

The nationwide battle over abortion is now focused squarely on Texas after the state's "fetal heartbeat" law went into effect Wednesday.While opponents were hoping the Supreme Court would interve...
Read more

A 12-year-old boy and a 15-year-old girl were wounded in a drive-by shooting on Chicago's West Side Saturday afternoon, according to the Chicago Police Department.
Read more

Police to resume search of Florida wilderness for fiance...

Police and FBI agents planned to resume their search of a swampy Florida wilderness for Gabby Petito's fiance on Wednesday, one day after the local coroner in Wyoming identified a body found there as the missing 22-year-old travel blogger.
Read more

Mike Lindell’s ‘Thanks-A-Thon’ Viewed by Dozens on YouTube After...

Lindell speculated that "millions" were watching his 96-hour election fraud-themed livestream, but only dozens were watching on YouTube Thursday night.
Read more

New York Yankees third base coach Phil Nevin tested positive for coronavirus in what was described as a “breakthrough" case and was not available for the game against the Tampa Bay Rays, the team announced Tuesday.
Read more

The Port of Houston, a major U.S. port, was targeted in an attempted cyber attack last month, the Port shared in a statement on Thursday.“The Port of Houston Authority (Port Houston) successfully defended itself against a cybersecurity attack...
Read more

Billionaire Gautam Adani wants his conglomerate to be a world leader in green data storage, with data centers run entirely on clean power playing a key part in his ambition to recast an empire built largely on coal mining and trading into a renewable energy g…
Read more

How the Global Chip Crisis May Be Getting Even...

A lawyer for imprisoned Russian opposition leader Alexei Navalny, who has complained of serious back and leg pain in custody, says doctors have found him to be suffering from a double hernia
Read more

Nvidia continues to test the waters of more expensive graphics cards with its best and most powerful mid-range GPU yet, the GeForce RTX 2060.
Read more

Microsoft Edge is getting a major security upgrade, but...

Microsoft is adding support for Control-Flow Enforcement Technology in Edge to make its private browsing mode even safer.
Read more

Presented by Equinor Support for a proposal granting bargaining rights but not full employee status to delivery and ride-hail drivers is taking a nosedive...
Read more

The United Nations human rights chief says that her office has documented the deaths of 350,209 people, both civilians and combatants, in Syria’s civil war over the last decade
Read more

Former Virginia Governor Terry McAuliffe, who is vying for his old job, refused to answer questions about accepting Virginia Gov. Ralph Northam’s endorsement after calling him to resign in the wake of his 2019 blackface scandal.
Read more

Trump shuts down his blog after less than a...

The blog page that former President Donald Trump launched less than one month ago, after his team suggested he'd be launching a major new social platform, has been permanently shuttered.
Read more

The Windows 11 developer build was available to Insiders this week, with early bugs already being discovered.
Read more

The seemingly simple bit of algebra sparked more than 4,500 comments, with people weighing in on both sides.
Read more

Abu Dhabi is seeking to create the largest steel and building materials company in the United Arab Emirates.
Read more

Seahawks’ Russell Wilson speaks out for first time on...

Seattle Seahawks quarterback Russell Wilson was at the front-and-center of trade rumors for a large portion of the NFL offseason, especially after he publicly voiced his frustrations with the team.
Read more

Flock to Disney Springs for New Disney Junior ‘The...

The products were sold nationwide and online by retailers including Amazon, Pottery Barn Kids, Target and Walmart.
Read more

Those quick to dismiss the TV host’s concerns that he is being spied on by the NSA should consider the sordid history of illicit surveillance. The post Sham Surveillance Safeguards vs. Tucker Carlson appeared first on The American Conservative.
Read more

Roughly 750,000 U.S. households face eviction in the months ahead in the wake of a Supreme Court ruling str...
Read more

The Food and Drug Administration is preparing to clear two batches of Johnson & Johnson Covid-19 vaccines that were produced at the troubled Emergent facility in Baltimore, a source familiar with the plans told CNN.
Read more

Faroe Islands may be underdogs at Hampden but Scotland need to beware the improvements Hakan Ericson's side have made in recent months.
Read more

The population of the rare saiga has more than doubled since 2019, reversing a slide towards extinction.
Read more

Clock Ticks for Leaders to Get to a Deal...

Group of Twenty leaders enter the final day of their summit on Sunday needing to agree on key climate goals ahead of the COP26 meeting in Glasgow this week.
Read more

McBath on Arbery verdict: No decision can ‘heal the...

Rep. Lucy McBath (D-Ga.) offered support to Ahmaud Arbery's family on the eve of Thanksgiving after a jury on Wednesday convicted all three men on trial for his killing."Today, #AhmaudArbery shou...
Read more