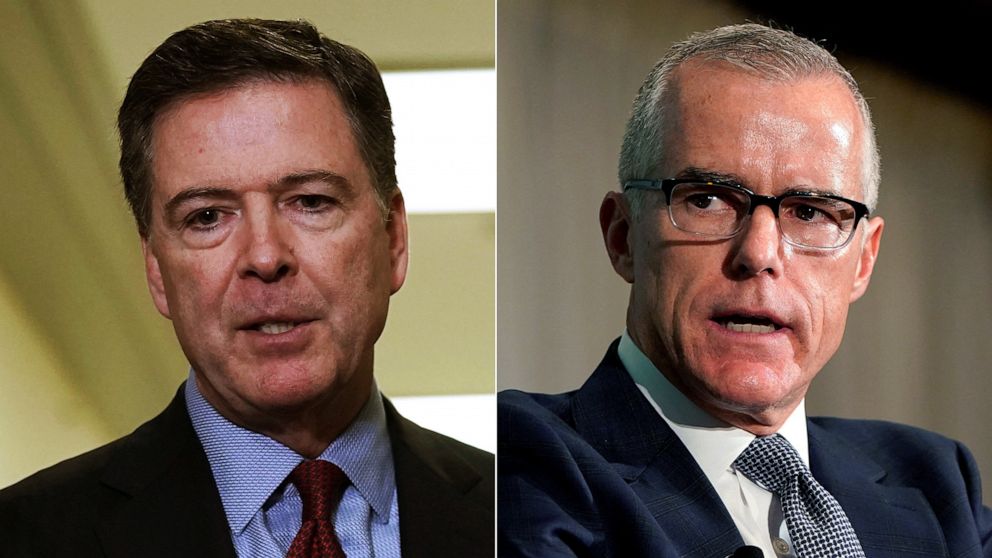 The Internal Revenue Service is asking a government watchdog to review a pair of exceedingly rare and invasive tax audits targeting James Comey and Andrew McCabe, a spokesperson confirmed to ABC News.

The matter will be analyzed by the Treasury Inspector General for Tax Administration.

Comey, the former director of the FBI, and McCabe, his deputy at the time, both drew the ire of former President Donald Trump for positions they took both in and out of office.

The New York Times reported Wednesday that Comey and McCabe were two of only several thousand Americans a year to attract these particular types of audits.

An IRS spokesperson said any suggestion that these two individuals were targeted would be “ludicrous and untrue.”

IRS Commissioner Charles Rettig “personally reached out” to the inspector general after receiving a press inquiry about the audits, the spokesperson added.

“Federal Privacy laws preclude us from discussing specific taxpayer situations. Audits are handled by career civil servants, and the IRS has strong safeguards in place to protect the exam process — and against politically motivated audits,” the IRS spokesperson said.

The Treasury Department’s inspector general for tax affairs did not respond to ABC News’ requests for comment. A spokesperson for Trump told The Times that he had no knowledge of these audits.

McCabe told ABC News he has questions about why he was chosen for this rare audit.

“It is essential that institutions like the IRS can maintain the trust of the people they serve,” McCabe said. “While the IRS investigator I dealt with was professional and responsive at all times, I have questions about how I was selected for this audit. I look forward to hearing the results of their internal inquiry to understand more about how this supposedly random enforcement effort is conducted.”

Democrat Ron Wyden, chairman of the Senate Finance Committee — which has jurisdiction over taxes, IRS and the Treasury Department — said his panel will look at potential action on the issue.

“Donald Trump has no respect for the rule of law, so if he tried to subject his political enemies to additional IRS scrutiny that would surprise no one,” Wyden said in a statement shared with ABC News. “We need to understand what happened here because it raises serious concerns. Commissioner Rettig reached out to me to reiterate that any allegations of wrongdoing are taken seriously and are referred to the [inspector general] for further review.”

Democratic Rep. Bill Pascrell went a step further, calling on President Joe Biden to fire Rettig. Pascrell chairs the Oversight Subcommittee of the Ways and Means Committee, which is the House’s tax-writing panel.

When asked during Thursday’s press briefing if Biden still has confidence in the IRS chief, White House press secretary Karine Jean-Pierre would only say he is “up in November.”

“He is a commissioner of the IRS. Part of the administration. I’m going to leave it at that,” Jean-Pierre said.

She would not comment further and referred questions to the IRS.

ASUS unveils its most flexible business laptops yet

WWII veteran is wishing for 100 cards on his...

‘We Met in Virtual Reality’ finds love in the...

Apple’s Far Out September event: what to expect from...

Sharing your favorite PS5 screenshots with the world just...

Ethiopian journalist accredited to AP is released on bail

Antonio Brown: Tampa Bay ‘threw me out like an...

Twitter’s future: How might the platform change under Elon...

1Password update will stop you becoming a crypto disaster...

Russian forces turn sights on Lysychansk in battle for...

Muck Rack, the journalist database, raises $180M in its...

DeWine, once a bipartisan favorite, faces re-election hurdle in...

Maharashtra: ‘Nowhere in the world can we find rock...

June slowdowns show end is near for German services...