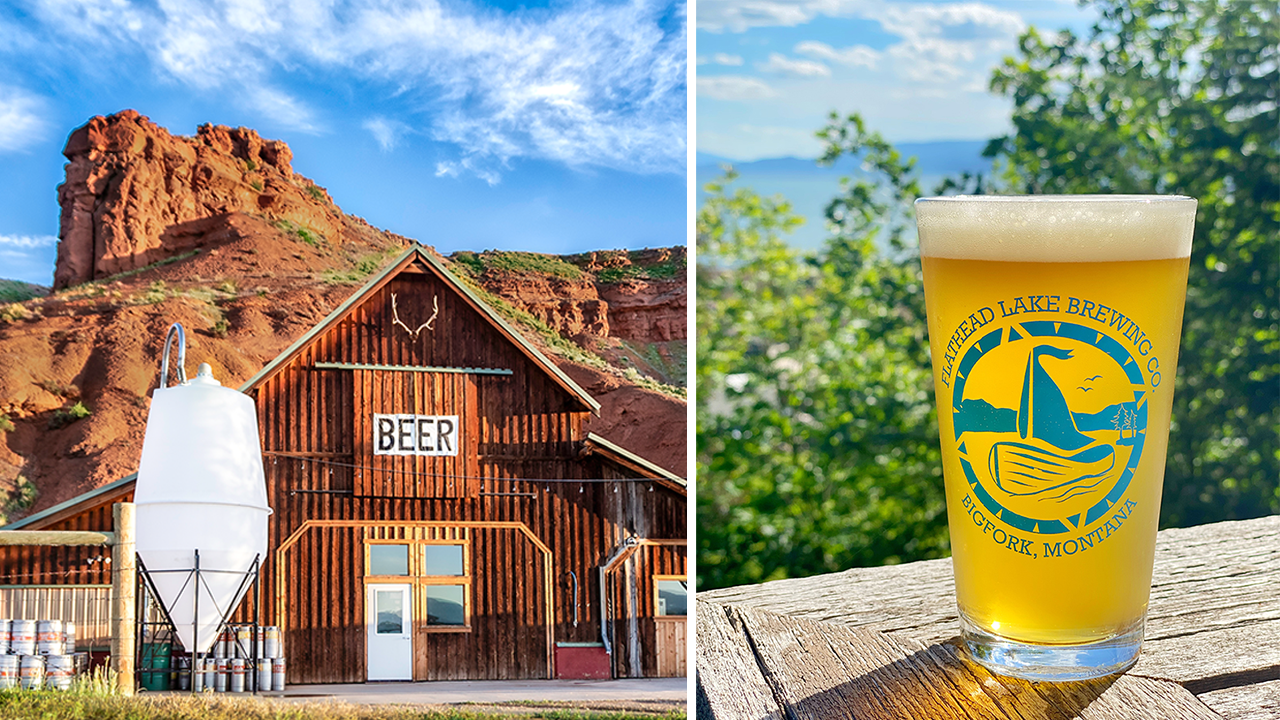 The American Midwest is already home to unique and beautiful views and vast landscapes.

Some of the region’s scenic wonders can also be found at none other than local breweries.

From the Rocky Mountains of Colorado to the small-town Sandhills of Nebraska, brewery owners are serving up their signature brews in various locations of the Midwest offering not just delicious drink options but gorgeous and powerful vistas of the American landscape.

For travelers who have a thirst to quench and are on the hunt for adventure, too or for those just looking to explore what’s out there, here are six breweries that offer unforgettable views of our America.

Ten Sleep, Wyoming, is not only the epitome of small town USA, its brewery sports one of the most unique views on the map.

The Ten Sleep Brewery barn is shown in front of the red cliffs of Signal Butte, in the town of Ten Sleep, Wyoming.

Ten Sleep Brewery, built inside a retrofitted barn, is surrounded by the red cliffs of Signal Butte in the town of Ten Sleep. Population: 270.

Brewery marketing manager Amy Truman shared with Fox News Digital that even though a majority of visitors are regulars, the brewery’s proximity to the Big Horn Mountains pulls in a variety of other travelers, such as motorcyclists and climbers.

“We’re pretty unique in that we’re able to make good enough products that people want to seek out our beer enough to sustain us,” she said.

The brewery is best known throughout the state of Wyoming for its signature Speed Goat Golden Ale, described as a light beer with a honey finish.

Iowas flat, sprawling landscape can be viewed in stunning fashion on the property of Alluvial Brewing.

The Ames-based brewery is located on 34 acres of restored prairie and six acres of certified organic farm, a spokesperson told Fox News Digital.

“The view looking northeast from the patio is iconic,” he shared in an email.

“Paths from the patio lead you through the prairie, highlighted by permanent installations by local artists.”

AMERICA THE BEAUTIFUL: 50 MUST-SEE LANDMARKS THAT TELL OUR NATIONAL STORY

Brewery guests are welcome to enjoy the rolling views of lush lawn from the back porch while sampling a hefty menu of hoppy ales and IPAs, fruity sours and canned beers.

If beer isnt the vibe Prairie Moon Winery borders Alluvial to the west.

The original ski town brewery has been around for 32 years and counting, founded by skiers searching for a great beer after a long day on the slopes.

Breckenridge Brewery visitors are prompted to sit back and relax with one of the brewery’s many original ales, lagers and sours, all while enjoying the breathtaking mountain views from the dining room and patio.

Visitors are welcome to play lawn games, hang by the fire pits or sit with a brew throughout the property’s 12 acres.

“The small brewpub has grown into one of the largest breweries in Colorado.”

The beer is brewed right behind the bar at the historic South Main Street location, so Thibault encouraged visitors to “belly up and watch the action.”

The brewery has a secondary location in Littleton, Colorado, which also features sprawling mountain views and a beer garden fit with a great lawn and picnic benches.

Visitors are welcome to play lawn games, hang by the fire pits or sit with a brew throughout the property’s 12 acres.

“Just 10 miles south of Denver beside the Platte River and bike trail, its easy to find by car, bicycle or inner tube,” Thibault said.

“Our house is all yours.”

Views from Flathead Lake in Bigfork, Montana, are already spectacular but insert a brewery into the mix and wayfarers have a real winner.

Customers can enjoy views of the crisp, blue lake water from the brewerys back patio while sipping on one of Flatheads signature brews, such as the Painted Rock Porter or 369 Stout.

Both beers were awarded World Beer Cup awards in 2006.

The small business sports a brewery and pubhouse in one. The team takes pride in making beer and food.

“We pride ourselves on being leaders in the beer industry, for supporting local and environmental sustainability and for contributing to the community.”

“If you’ve ever been to Bigfork, you would know how special a community it is,” she wrote in an email.

AMERICA’S TOP 5 HIKING CITIES, ACCORDING TO A NEW ANALYSIS

“We pride ourselves on being leaders in the beer industry, for supporting local and environmental sustainability and for contributing to the community that has so graciously embraced us.”

Venture out to the Black Hills of South Dakota, where a cold beer is awaiting your arrival at Miner Brewing Company.

The brewery in Hill City, South Dakota, offers stellar views of Black Elk Peak, which is the highest point east of the Rocky Mountains.

A Miner Brewing sign hangs in front of the Rocky Mountains in Hill City, S.D.

Visitors are invited to enjoy Miners many beer and wine options from the picturesque front porch and concert lawn.

“We love having the privilege of sharing our craft beers, ciders, seltzers, sours and wines with our guests, and we love sharing our beautiful space in the Black Hills of South Dakota,” Miner Brewings Shanna Hockert told Fox News Digital.

“We are family and pet friendly and have plenty of lawn games available, from corn hole to bocce ball to frisbee golf, making Miner Brewing Company a great stop in the Black Hills!”

Prairie Berry Winery, located right next door, was the first venture for brewery founder Sandi Vojta and her family, who wanted to create a “truly unique South Dakota experience,” according to their website.

A view from the lawn of Miner Brewing in Hill City, South Dakota.

One year after its 2013 opening, Miner Brewing expanded to open a second location in Sioux Falls.

If you love remote locations and wide-open spaces, check out this tucked-away brewery in Taylor, Nebraska.

But the property fit with a brewery and five on-site cabins for lodging is the perfect getaway for weary travelers, offering a great view of the Nebraska Sandhills.

“People really don’t realize what the Sandhills look like until they come out, and it’s a real good indication of what it is,” Worm said.

“You get the Sandhills, you get the coyotes howling, you see rabbits, porcupines.”

The 40-acre property has six camper sites with electricity and water, as well as a pond where visitors can fish and a back patio that often hosts live bands.

Worm explained that the idea behind building a brewery hidden away in the hills was to set Bootleg apart from most breweries located in town which has worked out “pretty decent” since the brewery’s official 2015 opening.

Despite having a whole lot of land to look after, Bootleg Brewers operates with only four employees, including Dodie and her husband and head brewer Ron Worm.

“We have Molly, who tends bar and then we’ve got Hector, who does a lot of the groundskeeping,” she said.

Bootleg is best known for its flagship “Cling On” American Wheat beer.

“After a few too many, you’re looking for something to cling onto,” said the company. Your Evening Briefing: Russia May Have War Plans Beyond...

Some of the world’s biggest tech firms are teaming...

China Is About to Regulate AI—and the World Is...

A new agency to accelerate biomedical science can succeed,...

Senior Cat Demanding To Be Spooned Every Night by...

True Detective season 4 is confirmed and a double...

Scientist dies after being pulled from hospital bed on...

Citigroup Is Helping Some of Its 200 Ukraine Workers...

Cat Failing To Hide Delights the Internet: ‘Trying Her...

Pope steps up pleas for talks to end fighting

Reestablish separation between private, public spheres during protests at...

MOTD2 analysis: Could Patrick Bamford be the difference for...

Fears of Russian invasion rise after shelling in eastern...

Justice Clarence Thomas is ‘our greatest living American,’ despite constant attacks from...