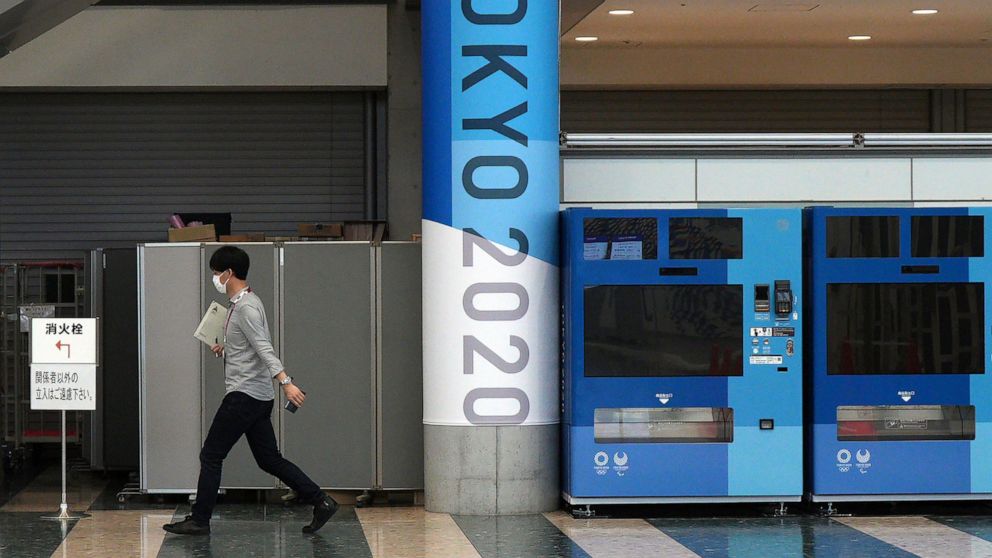 TOKYO — A member of the Serbian Olympic rowing team has tested positive for COVID-19 while trying to enter Japan for the Tokyo Olympics that are to open in just under three weeks.

The news was reported Sunday by the Japanese agency Kyodo and cited Japanese health ministry officials.

The report comes after two members of the Ugandan Olympic delegation tested positive for the coronavirus last month upon arrival in Japan. One tested positive at Narita airport near Tokyo, but the remainder of the team was allowed to travel to a training site.

A second member of the delegation was found later to have the virus.

Seiko Hashimoto, the president of the organizing committee, said on Friday that more than 500 participants had arrived in Tokyo without incident. About 11,000 Olympic and 4.400 Paralympic athletes will arrive for the Olympics, in addition to tens of thousands of other coaches, judges, and Olympic officials.

Organizers still have not decided about allowing local fans into venues. Fans from abroad were banned months ago.

Almost two weeks ago, organizers said they would allow indoor and outdoor venues to be filled to 50% of capacity up to 10,000.

But with new infections rising daily in Tokyo for two weeks, local organizers are expected to meet this week with the International Olympic Committee and others and lower the cap, or remove spectators altogether.

Japan media have reported many possible scenarios: They include: no fans at all; no fans at the opening ceremony on July 23; limits on fans at night events; dropping the limit at all venues to 5,000.

Dr. Shigeru Omi, a top government medical adviser, has said repeatedly that no fans is the safest option. He has also questioned why the Olympics are being held at all in the middle of a pandemic. He has termed it abnormal. Next three Call of Duty games will release on PlayStation – but what happens then?

Hong Kong is approaching its capacity to handle Covid-19 cases, as the latest omicron threat puts a strain on the city’s overloaded health-care system.
Read more

Lava announces a trio of tablets for students starting...

Lava has launched a trio of tablets as part of its e-Education series named Magnum XL, Aura and Ivory.
Read more

TGIF! Welcome to Overnight Energy, your source for the day's energy and environment news.Please send tips and comments to Rachel Frazin at [email protected]
Read more

The productivity-focused Microsoft Surface Duo is all about reimagining what you do with the device you carry in your pocket.
Read more

The singer will take 'fun and upbeat' track Embers to the Eurovision Song Contest in Rotterdam.
Read more

On The Money — Biden’s beef with the meat...

Happy Monday and welcome to On The Money, your nightly guide to everything affecting your bills, bank account and bottom line. ...
Read more

One Million People Are Still Shielding From Covid in...

More than one million people in England who are most at risk of becoming seriously ill from coronavirus are continuing to shield even after the U.K. government stopped advising them to stay at home, research suggested.
Read more

A nation that had begun to celebrate victory in the exhausting fight against the coronavirus is starting to realize the end is not in sight after all.As the light at the end of the tunnel recedes, the big political...
Read more

Biden to keep Trump-era land mine policy in place...

The Pentagon said it will keep in place a Trump-era policy allowing the use of certain antipersonnel land mines that were restricted under former President Obama while it conducts a review.The announcement comes as...
Read more

Latino student Ever Lopez got his high school diploma Monday from Asheboro High School in North Carolina after it was denied for wearing a Mexican flag over his graduation gown.
Read more

Military meals get a taste makeover

Watch the best goals from the latest round of the Women's Super League including a "fabulous finish" from Hanna Bennison for Everton.
Read more

With eye on Iran, Israeli navy steps up Red...

One of America's most popular national park hikes will require a permit as of 2022.
Read more

Woody's inspirational lockdown quotes have been turned into artwork by his dad.
Read more

Tucker Carlson has attacked CNN host Jim Acosta after he criticised his conduct during an interview with Andrew Yang.
Read more

Abortion rights advocates warn of a threat to the landmark 1973 precedent.
Read more

Security camera footage shows a group of people chasing Bakari Henderson on a sidewalk. At one point, a man shoves him into a parked car. Henderson was killed during a brawl on Friday.
Read more

As clock ticks down, Manchin is the vote to...

Sen. Joe Manchin (D-W.Va.) is being lobbied intensely from all sides as President Biden and Democratic negotiators try to clinch a deal on their massive economic spending plan.Manchin stands a...
Read more

Mobile gaming is better than ever, and Crash Bandicoot:On...

We spoke to the developers behind Crash Bandicoot: On the Run, a game which is proving that mobile gaming is better than ever.
Read more

Vice President Kamala Harris wrapped up her trip to France by lying flowers at a memorial in Paris that honors the 130 people killed in a 2015 ISIS attack, according to The Associated Press.
Read more

For about 1 million people across the U.K. Covid-19 didn’t just go away. Instead it lingered, causing exhaustion, shortness of breath, cognitive issues and other health problems.
Read more

South Dakota Gov. Kristi Noem pulled in $330,000 for her reelection campaign at a Sioux Falls fundraiser last week, smashing the record for the largest single fundraising event in state history, according to her campaign...
Read more

Masks offer protection against Covid, but they also increase the inhalation of carbon dioxide.
Read more

Summer camps look forward to welcoming back children, with...

Millions of children missed out on camp last year as coronavirus triggered closure after closure. Bookings are bouncing back this year and camp directors are focused on fun as well as safety.
Read more

Alex Verdugo hit an RBI single with bases loaded and two out in the bottom of the ninth inning to give the Boston Red Sox a 4-3 win over the Cleveland Indians on Saturday.
Read more

The military takeover of Myanmar early in the morning of Feb. 1 reversed the country's slow climb toward democracy after five decades of army rule. But Myanmar's citizens were not shy about demanding their democracy be restored. They poured into the street…
Read more

India has test-fired a nuclear-capable intercontinental ballistic missile with a range of up to 3,125 miles amid rising border tensions with China
Read more

Former White House chief of staff Mark Meadows on Wednesday refuted reports - based on his own book - that former President Trump tested positive for COVID-19 ahead of a debate with President Biden in 2020. ...
Read more

These OnePlus phone deals cut nearly £300 off the...

Thanks to Prime Day various OnePlus phones are available discounted, including the OnePlus Nord and OnePlus 8 family.
Read more

The 2021 wildfire season is intensifying in the western United States, with 80 large fires burning as of the beginning of the week, including an Oregon blaze covering more than 300,000 acres.Statistics from the Nat...
Read more

England sees no need for further restrictions – for...

U.K. Prime Minister Boris Johnson sees no need for further restrictions to curb the spread of the coronavirus' omicron variant, his spokesman said ahead of a press conference on Tuesday
Read more

Miss Universe competition will be held in Israel in...

The next Miss Universe competition will take place in December in Eilat, Israel
Read more

Labour MP Harriet Harman to stand down at next...

The veteran MP announces her impending exit from the Commons after almost 40 years in the job.
Read more

Myanmar: The small embattled town that stood up to...

Mindat put up tenacious resistance to the Burmese army but is now in desperate need of help.
Read more

Watch the highlights as Bayern Munich celebrated being crowned champions of Germany for the ninth straight season in style as Robert Lewandowski's hat-trick helped them thrash Borussia Monchengladbach.
Read more

Singapore to allow quarantine-free travel for UK and other...

The island says it is easing Covid restrictions, and will allow vaccinated travellers from 11 countries.
Read more

The first book from Pence, an autobiography, is tentatively set to be published in 2023.
Read more

Tennessee to stop outreach promoting adolescent vaccines for all...

Tennessee plans to end its outreach promoting vaccines for adolescents against all diseases, including COVID-19, after criticism over immunization efforts directed toward minors, the ...
Read more

Lyon are set to be without two key players for their Europa League tie with Rangers, while Celtic are bidding to make history in Spain.
Read more

Capitol rioter who posed inside Pelosi’s office is released...

Richard Barnett does not present the kind of danger to society that would warrant his pretrial detention, a federal judge ruled.
Read more

Kieran Calder on the Markets (Radio)

The jackpot rises to $241 million after no-one won the latest grand prize—but there were plenty of winners.
Read more

J&J CEO Gorsky to step down, company veteran to...

CBDCs Will Change the Global Financial System Unless Regulations...

CBDCs have the potential to disrupt the world of money as we know it and lots of people are trying to figure out how to preserve the status quo.
Read more

At least 11 companies, including Zynga, have tools from Nintendo to make 4K Switch games.
Read more

California economic projections predict record growth but many are...

The U.S job report comes out Friday morning as California is expected to have record-high economic growth post-pandemic. The recovery leaves many unemployed people hopeful for an uptick even if they haven't received the call into work yet.
Read more

Lady Gaga strikes a pose in plunging camisole for...

"A Star Is Born" actress Lady Gaga stunned fans with a pair of brief videos featuring herself posing in a plunging camisole and seemingly sans pants.
Read more

Lemonade’s Use of AI to Study Claims Brings Uproar...

Lemonade Inc., an internet-based insurer, said that it doesn’t use artificial intelligence to deny claims or coverage based on a person’s characteristics after a “poorly worded tweet” drew heated criticism online.
Read more

On the BBB, Sen. Manchin is doing what he thinks is best for America and standing up for what he believes in. And I am proud to stand with him.
Read more

Could the key to Metroid Prime 4 be this...

A reveal from the past could hint at what Metroid Prime 4 might entail...
Read more

The auctioneer says the buyers "seemed to think they are actually Egyptian".
Read more

An outside GOP group allied with Senate Minority Leader Mitch McConnell (R-Ky.) is launching a new $10 million ad blitz to targeting three of Democrats' most vulnerable senators next year.The broadside from One Nat...
Read more

A sprawling investigation by an international consortium of journalists and news organizations uncovered millions of documents detailing how rich and politically-connected individuals across the globe use offshore companies to avoid taxes and hoard wealth.
Read more

More than $72,000 in seized cash went missing from a central Kansas sheriff's department sometime after a drug bust on Interstate 70 in January 2017
Read more

Clydebank-based Together Energy says the sustained increase in wholesale prices made its position "untenable".
Read more

Can I get a booster shot? Latest guidelines for...

The CDC recently recommended additional doses for millions of Americans, including all adults who were first vaccinated with Johnson & Johnson's shot.
Read more