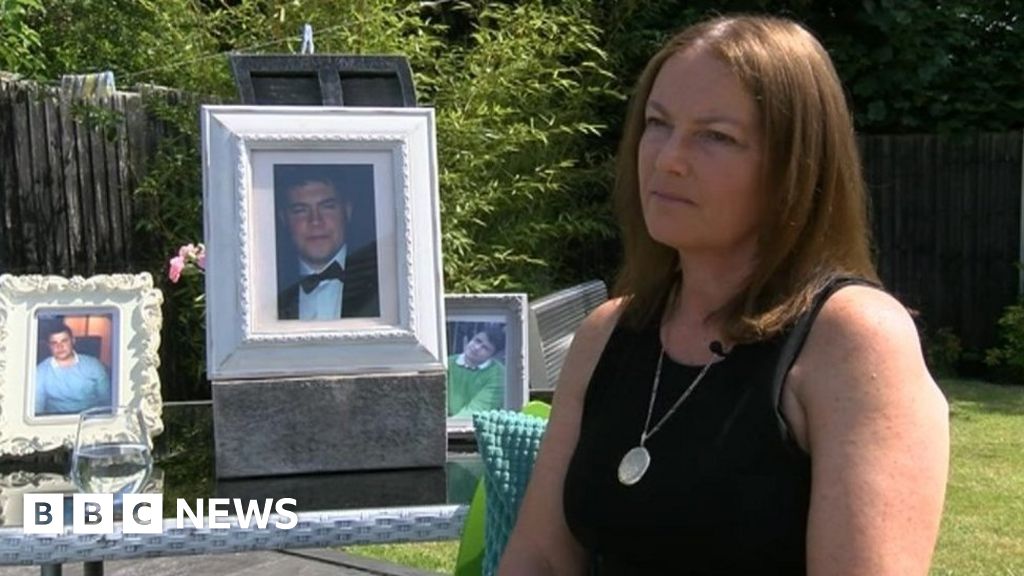 The mother of a man who died after being stabbed outside of a nightclub, said the loss of her son torments her every day.

Tom Kirwan, 23, died on 8 July 2012, after violence broke out outside the former Uberra nightclub in Wolverhampton.

His mother, Emer Kirwan, said losing her son had destroyed her.

Tom’s killers have still not been found and a reward for information has been increased to £30,000.

A fresh appeal for information on Tom’s killers was launched earlier this year. No-one has been charged with his murder.

Image caption, Violence broke out involving a large group outside the former Uberra nightclub in Wolverhampton

“My heart has been ripped open. No parent should ever have to bury their child,” Ms Kirwan added.

Tom Kirwan, a factory worker in Shropshire, was engaged to marry before he was killed.

“He was my first born and he was amazing,” Ms Kirwan said.

Image caption, Tom Kirwan was described by his mother as “kind, generous and loyal”

Half of the money increased reward money has come from the charity Crimestoppers, with the other half from the family.

“Now is the time to look deep into your conscience and just pick up the phone and tell what you saw that night, however small it may be to you,” she added.

Image caption, Tom’s family have organised an event the day after the anniversary of his death for the community to celebrate his life

There were people there that night who still have not come forward, she said, and added that she “knows in her heart that people did watch and did see it unfolding”.

Back in March, and speaking on BBC Crimewatch, Det Supt Shaun Edwards, of West Midlands Police, said there was a minor dispute inside the club.

“When the people came out the club at around 04:30 there was quite a big disturbance in the street, people turned up in cars and tragically during that disturbance Tom was stabbed,” he said.

“I have to stress that if you use a knife, you are not just destroying that one person, you are destroying the whole of the family,” Ms Kirwan said.

“Every one of my family in one way or another has been destroyed, because somebody thought it was ok to take a knife out and use it,” she added.

Ms Kirwan has organised an event in Wolverhampton on the 9 July, the day after the anniversary of Tom’s death, where the community can come together to remember the life of an “amazing son”.

An airport official in Nepal says 14 bodies have...

The Prisoner Who Revolutionized Chinese Language With a Teacup

Inhofe to retire from Senate, teeing up special election...

Teen arrested in murder probe that led to fatal...

Rapist Who Used Tinder to Find Victims Jailed For...

International flight turns around after passenger refuses to wear...

PHOTO GALLERY: A Ukrainian village awaits the next move

New Hampshire killers bounty has been raised to $50k...

Christian Wakeford: Defecting was most difficult decision I’ve ever...

The Ashes: England cling on for draw on tense...

GOP divided over response to Russian aggression in Ukraine

Turkey to lower taxes on basic foods to fight...