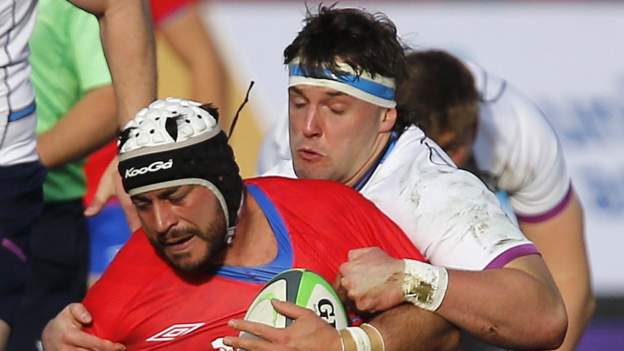 Scotland A ran in seven tries against Chile in Santiago as the tourists warmed up for their Test series in Argentina with a 45-5 victory.

Hoyland got his third try early in the second period before Chile replied through Santiago Edwards.

But Rufus McLean and Ali Price went over to add further gloss to the Scottish win.

Gregor Townsend’s side play the Pumas on the first three Saturdays in July.

After some handling errors early on, the tourists worked the opening try on 11 minutes following a line-out.

The ball was moved from left to right and Ollie Smith offloaded for Hoyland to cross. Ross Thompson converted.

Captain Luke Crosbie spotted a gap to burst through and slip a pass to Horne for the Scots’ second try under the posts, setting up an easy conversion for Thompson.

Horne’s feint at the back of a ruck deceived the Chileans as he skipped his way through for his second try, Thompson again adding the extras.

McLean thought he had got a fourth try but a knock-on by Horne brought play back for a scrum and Ben Muncaster could not ground as he was held up beyond the tryline.

But a fourth try did arrive before the break with Hoyland picking a good line to receive Horne’s pass and ploughing over.

After Salvador Lues’ intervention prevented the concession of a fifth try for the hosts early in the second half, Scotland A continued their forceful approach.

And Scott Cummings’ delightful flick put Hoyland away on the right for his hat-trick. This time Thompson was unsuccessful with the boot.

Chile battled hard to get on the board but skipper Rodrigo Fernandez’s errant pass into touch halted one of their best opportunities.

Benjamin Videla’s burst towards the tryline was the catalyst for Chile’s score, with the ball recycled for Edwards to dive over.

The Scots responded with McLean receiving on the left and outpacing all around him to touch down.

And Chile’s fatigue was exposed when Mark Bennett dummied and offloaded to fellow substitute Price to run through unchallenged. Blair Kinghorn, having missed the last conversion, was successful with the final kick of the match.

LIVE MARKETS A whiff of optimism ahead of U.S....

Renowned founder Brian Lee and Derek Jeter have a...

Opinion: How I got over my baby formula shame

Ed Sheeran performs for Queen on final day of...

CAA talent agency is the latest to cut ties...

Google is cracking down hard on deepfakes

Chelsea: Woman and three dogs die after being hit...

Bury: The town where football fans are shaping politics

Cats Rule the Earth Is a Must-Have Tarot Deck...

Sony confirms its new PlayStation Plus tiers will launch...

Active-duty Marine is arrested after allegedly stabbing his estranged...

Cuban, US officials meet in Havana on consular services

Analysis: Questions mount over whether trip is worth the...

Companies Make Emissions Vanish, but Not From the Air

Woman Praised for Not Giving Day Off to Coworker...

Under sweeping sanctions, Iran hawks its weapons in Qatar

5-year-old Michigan boy found dead with gunshots in his...

Donald Trump’s longtime CFO chokes up over betraying the...

Thames Water hosepipe ban to stay in force until...

Trump closes the midterm with his own standing in...

iPadOS 16 is a brilliant update… but only on...

How Biden can still meet his climate goals