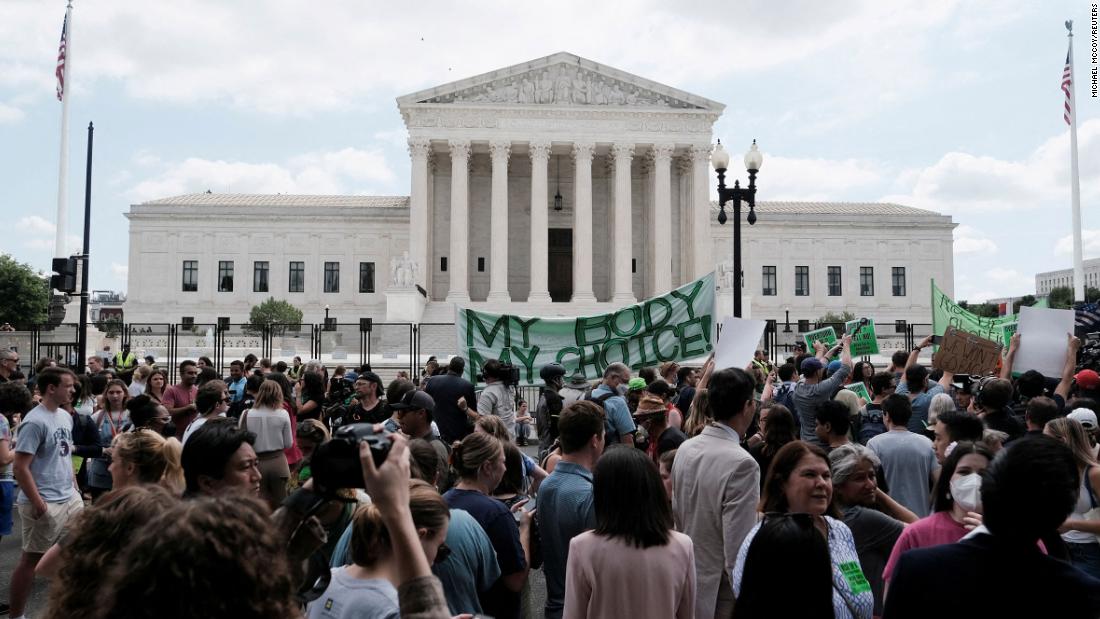 (CNN)After the Supreme Court overturned Roe v. Wade on Friday, holding that there is no longer a federal constitutional right to an abortion, protesters and supporters of the ruling gathered at the high court’s building in Washington, DC, and in other cities nationwide.

Similar demonstrations are planned in at least 70 locations across the country on Friday and the weekend, according to CNN’s research.

In the nation’s capital on Friday, one person led protesters in front of the Supreme Court in a chant of “Hands off! Hands off!” and a call-and-response of “My body! My choice!”

One woman told CNN affiliate WJLA the decision was an outrage.

Protesters asked those in attendance to donate to abortion advocates and purchase abortion pills to distribute to others.

Abortion rights opponents were also present in front of the Supreme Court building in Washington, DC. After the decision came down, a man — standing amid placards including the messages “Roe is dead” and “I am the post-Roe generation” — sprayed champagne in the air above others who were celebrating. There were several dozen abortion rights opponents at the site during the afternoon, but it appeared they had filtered out of the crowd by evening.

In Atlanta, several hundred people in two different demonstrations merged and gathered in front of the Capitol. Almost all of the people were protesting the decision. A CNN crew saw one counter-protester where one group began its march a few miles away.

In Texas, a large crowd gathered in front of a federal courthouse in downtown Austin. People took to a microphone to tell stories, many of fear and frustration. Some carried signs, including one that said “Pro-life is a lie, they don’t care if we die.”

In Washington, DC, an abortion rights activist climbed to the top of the Frederick Douglass Memorial Bridge, which was subsequently shut down. Guido Reichstadter posted videos and photos of himself on social media from the top of the bridge, where he unfurled a large green banner. Green is recognized as a symbol of abortion rights.

Reichstadter also planted a flag on the bridge that read “Don’t tread on my uterus.”

He told CNN that while many people in the US oppose the Supreme Court’s decision, their support is largely passive, which he says is not enough to ensure that women have access to abortions across the country. World leaders arrive in London for funeral of Queen...

Check out this year’s Future Tech Awards winners, from...

Rudy Giuliani should be investigated for reporting false crime,...

Instacart to Slow Hiring to Focus on Profitability Ahead...

Fire Erupts at Russia Aviation Institute Near Moscow as...

20 million in China now under lockdowns ahead of...

Games with Gold’s Xbox 360 support is ending with...

Israel appoints ambassador to Turkey in sign of warming...

EU, Egypt Near Gas Supply Deal in Shift Away...

The Prisoner Who Revolutionized Chinese Language With a Teacup

Biden leaves no doubt: ‘Strategic ambiguity’ toward Taiwan is...

Germany aims to find alternative to Russian oil within...

CSX Turns Away Freight as Railroad Struggles to Fill...

Boat with 97 migrants aground on Greek island, no...

Reliance in Talks to Raise Up to $8 Billion...

Man dies after setting self on fire at Supreme...

Chinese battery maker Gotion to locate a third of...