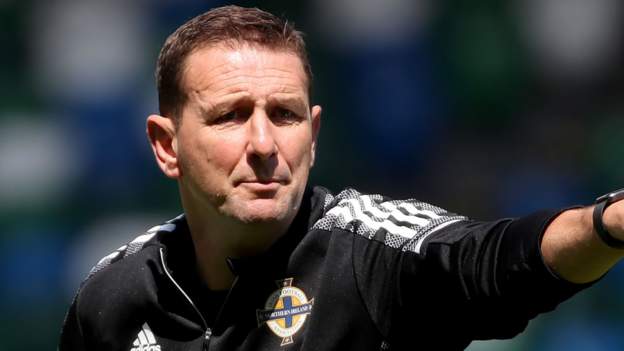 Former Northern Ireland striker Gerry Armstrong says manager Ian Baraclough should be given time “to develop players and show the team’s true potential” after a disappointing start to the Nations League campaign.

It has left Baraclough’s position under threat, but Armstrong said: “I think we have good days coming ahead.

“We’ve got young players being developed and that’s key.”

Baraclough, 51, came in for criticism from a section of the Northern Ireland support during June’s Nations League League C Group 2 games, which yielded two draws and two defeats against three teams ranked lower in the Fifa rankings.

Northern Ireland’s remaining fixtures in the competition are at home to Kosovo on 24 September and in Greece on 27 September.

“For me, you have to give Ian time. Give him to the end of the tournament and then you can judge him then,” Armstrong told BBC Radio Ulster’s Sportsound Extra Time programme.

“I was disappointed with some of the performances and he would have been as well. We need to see more than that and you have to keep moving forward.

“We expected more than that when facing that type of opposition but I hope the results turn round.

“We have to learn from the mistakes we got punished for. We need to go and win our next game and when the competition is over then we can reflect.”

‘We have a lot more to give’

Baraclough fielded a number of young players during the games and the 68-year-old Armstrong, who famously scored his country’s winning goal against Spain at the 1982 World Cup, believes they must be given an opportunity to find their feet.

“It’s difficult for players at the end of a long season, especially ones who don’t have experience, but then you don’t get experience unless you play,” added the 63-cap former Tottenham and Watford forward.

“It took me seven or eight internationals to find out what it was all about and then to make progress.

“Players need to recharge their batteries over the summer with their clubs and we need to be positive and have belief for the future.

“There are some fantastic players and some great young talent in the squad.

“I feel we haven’t shown our true potential. We have a lot more to give.”

Man acquitted of double murder due to his mental...

VIDEO: Inside Look at the Great Apes National Geographic...

The Hundred: Oval Invincibles’ Jason Roy falls for another...

Week in Review: Try telling Netflix that sharing is...

Russia launched hypersonic missiles due to a low stockpile,...

US seeks regional approach to migration and asylum seekers

Harry Prepares for Showdown in Police Security Lawsuit Against...

Social Security’s cost-of-living bump could be near 11%: Report

Kupp says Rams have what it takes to repeat...

Man charged with murder of mother of his 3-month-old...

China-Taiwan: As China broods, Taiwan is in a ‘Pelosi...

Peter Foley no longer employed by US Ski and...