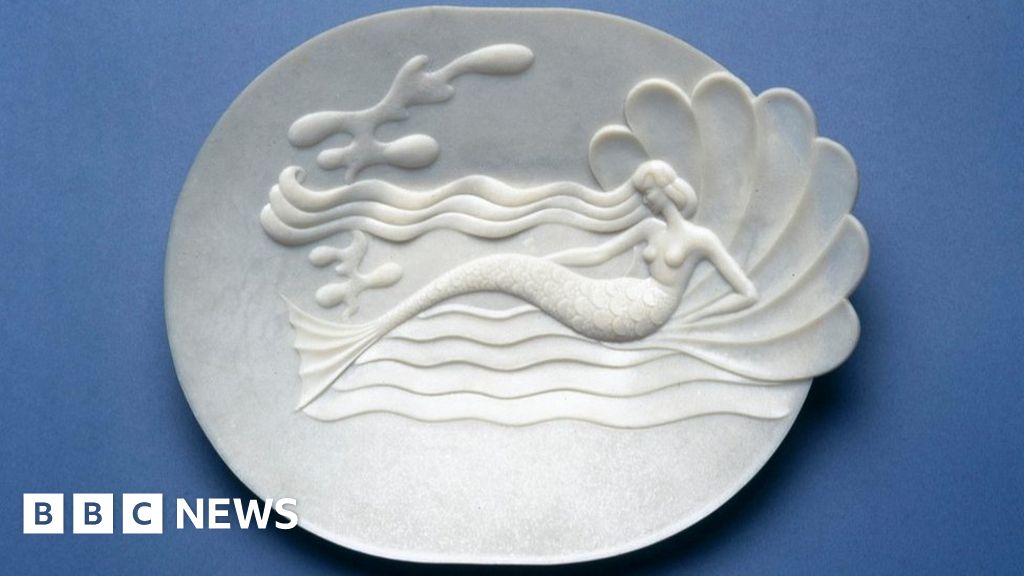 For Laura Bullesbach and Rebecca Mellor, unknown queer histories can be found in what can seem like the most unlikely places of a museum.

“Every object can tell different stories, so one object always has loads of different things to say, and it’s always a choice that the person interpreting it makes on which story is told,” Ms Bullesbach says.

The pair, who are both assistant curators at the Science Museum, are taking part in a series of talks marking the 50th anniversary of Pride in London, being held during this weekend’s Great Exhibition Road Festival.

The free two-day family event will see the famous museums and institutions of South Kensington file out on to Exhibition Road to celebrate the world’s trailblazers with various events, presentations and mass experiments.

Image caption, The pair use a pharmacy sign created between 1700 and 1870 to look at how the meaning of symbols can change

“Often, for different reasons, the queer story has not been told in many museums,” says Ms Bullesbach.

“But science is for everyone and it’s important for people of all communities to see themselves in those trailblazers and to maybe see a trans woman of colour who is a scientist and be like, ‘ok I can be like this one day’.”

The pair cite aspects like Section 28, when local authorities were prohibited from “the promotion of homosexuality”, as among the reasons why queer stories and items related to them have been previously missed.

And so they have been hunting through the Science Museum’s collection to find new ways for these stories to be told.

Image caption, A model of a mass miniature x-ray unit is used to tell the story of radiologist Alan Hart, who was one of the first trans men to undergo gender reassignment surgery

Some are more obvious than others, as Ms Mellor explains.

“For example, Alan Turing, we collect his computers and objects related to him not necessarily because he was queer but you can pull out that story, and that’s what we’re doing.

“That adds a whole other element and an interesting way of approaching queer contributions to science and technology.”

In other cases, objects that were created for one reason are looked at in a whole different way.

“A jug for violet syrup was collected because of its history of pharmacy and violets being used as medicines, but we can use this as a catalyst to tell a different story, which is that the violet is, or has been for a long time, a symbolic flower for women desiring women,” Ms Bullesbach says.

Similarly, the pair point to an elaborate shop sign for a pharmacy, which was thought to have been created in the 16th or 17th Century and features the head of a unicorn.

“Unicorns are actually a very powerful symbol for the queer community in a multitude of ways, not just positive, it can also be a negative symbol particularly for people in the bisexual community, and so we use this discussion as a catalyst to discuss terminology and how symbols change and can be adapted to mean different things to different people,” Ms Mellor says.

However, it is one highly unassuming object, a screw adapter chuck made of two parts, one designated male and the other female, which is one of the pair’s favourites.

Image caption, Made in about 1740, the screw adapter chuck has both male and female parts

“It’s just this connector, but what we’re talking about with this is gendered terminologies which are used to describe technology,” says Ms Bullesbach.

“The process of putting them together is called mating and when a connector has both female and male characteristics it’s called hermaphroditic and so this is basically an object that talks about how heteronormality is just so normalised in technology and science language.”

With the Science Museum’s collection being made available to view online, the two assistant curators are keen to encourage others to look at items in a different way, as they will be doing with those who attend one of their talks.

“The objects are actors and they continue to tell new stories to new people – their lives don’t end when they were made,” Ms Mellor states.

“It’s an issue which can really impact other marginalised groups so it’s a really powerful tool for connecting with museum collections in a unique way.”

Image caption, The mermaid, as featured on this serving dish in the museum’s collection, is a prominent trans symbol

Through their talks and future events, like self-led queer tours during museum night visits, Ms Mellor and Ms Bullesbach hope to “create a space for the queer community to be seen and feel visible”, and possibly even motivate a future trailblazer.

“The Science Museum’s overarching goal is to inspire people, visitors and the next generation of scientists and engineers. But to be inspired to do something, you need to see yourself in it and that is the big goal of what we’re doing as well,” says Ms Bullesbach.

“We want audiences to see themselves in the objects and to be able to relate to and know they had a place in history as well.”

The Great Exhibition Road Festival takes place on Saturday and Sunday. The two talks, Seeing things queerly: Unearthing LGBTQ+ stories in the Science Museum Group’s collections and Shining a light on queer stories across museums, take place in the Hochhauser Auditorium of the V&A from 13:00 BST on Saturday.

Man pulled from rubble after rocket attack in Ukraine

Dow falls for a sixth straight day after another...

Trump vs. James — and Pelosi vs. Raskin

Fetterman to POLITICO: I will debate Oz

The Multifarious Multiplexity of Taika Waititi

The only Prime Day deals I bought this year...

Law enforcement on alert for threats over Supreme Court...

IMF reaches deal with Pakistan to revive $6B bailout

Diablo Immortal doubles down on social play with snazzy...

US, Poland in talks to help Ukraine acquire warplanes

Former deputy press secretary for Trump to testify at...

One of Warhol’s Marilyn Monroe portraits could fetch a...

County Championship: Somerset beat Warwickshire by an innings and...

Voestalpine in advanced talks to sell majority stake in...

Man Backed for Calling Out Stranger Over ‘Weird’ Seat...

Bjorn Lomborg: The left should stop ‘scaring our kids...