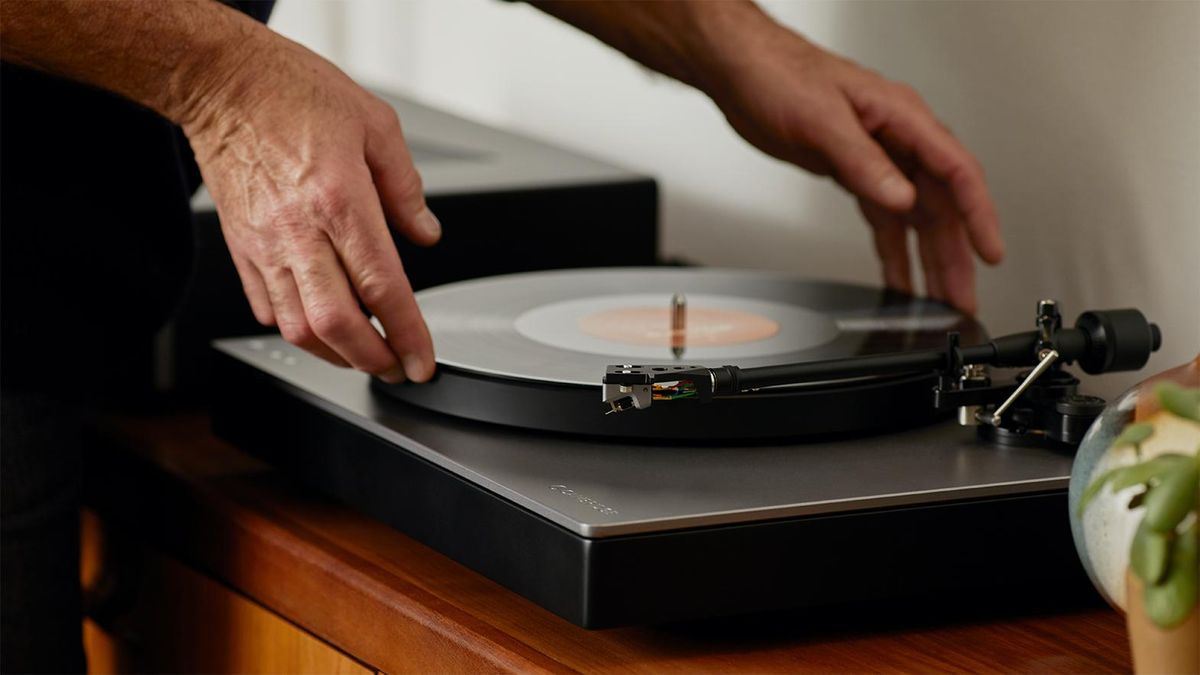 So Cambridge is back with a new, more expensive and mildly updated Alva TT: the V2. Its integrated phono stage is now switchable. It has a new tonearm and cartridge. The price has risen a little. But V2 retains the original’s bank-vault build quality, aptX HD hi-res wireless streaming smarts, and overall air of profound solidity that made it one of the best turntables around.

It also retains a lot of the original’s sonic emphases. The Alva TT V2 is a deft, smooth and insightful listen, a little short of dynamic headroom but very long indeed on detail retrieval, tonal balance and generously engaging sound.

Yes, this sort of money can buy a more rigorous sonic attitude and more dynamic headroom at the same time. What it won’t buy is better build quality, greater midrange fidelity, anything like as much convenience, or the ability to listen directly on the best wireless headphones. So, even more so than is usual on these pages, you need to make a value judgement.

That’s serious money for a record player – and it’s the sort of money that brings quite a few high-profile alternatives into view. Everyone from Clearaudio and Rega in Europe, Technics in Japan and VPI in the United States will happily sell you a turntable for this sort of money with high-end audio credentials – although they won’t be quite so extensively specified, admittedly. In fact, let’s take a look at the features now.

Naturally, you can use the Cambridge Audio Alva TT V2 with dust cover or without. (Image credit: Future)

As far as true ‘design’ is concerned, nothing about the Cambridge Audio Alva TT v2 is going to surprise or startle you. This turntable is designed to look like a turntable, albeit a nicely constructed and finished one, and as such is never going to be an interior decorator’s favourite item.

That’s not to say it doesn’t look good, or a lot like the outgoing Alva TT, though. A hefty, smoothly finished chassis is topped by a tactile aluminium plinth with the ‘Cambridge’ logo punched into one corner and three buttons (‘power on/off’, ‘33.3’ and ‘45’) nicely recessed into another. The whole thing is covered by a hinged, smoked-plastic dust-cover.

On top of the plinth there’s an extremely hefty polyoxymethylene platter, and off to one side an entirely fresh design of tonearm. For this V2 model, the tonearm now features anti-skate as well as counter-weight adjustment and has a detachable headshell for ease of cartridge-replacement. It’s pre-fitted with a cartridge, of course – a high-output Cambridge Audio moving coil option with a replacement cost (according to the brand’s website) of £499.

On the inside, the Alva TT v2 uses a direct-drive mechanism to turn that chunky platter – but this is no DJ-centric turntable for hooking into a mixer. Cambridge Audio asserts the best way to guarantee rotational stability is to specify a medium-torque direct-drive motor in conjunction with a high-density platter. That’s what this turntable has, and while it takes a turn or two longer than you might be expecting to come up to speed, once it’s there it’s unshakeable.

On the rear of the chassis are a number of items of interest. There’s power input and a pair of stereo RCA analogue outputs for connection to an amplifier, which are both pretty much par for the course.

There’s also a switch for the integrated phono stage – this circuitry is based closely on the well-received Alva Duo stand-alone phono stage Cambridge Audio introduced a while back and, unlike the original Alva TT, it’s optional. Turn it on and the V2 outputs at a line-level any amplifier can handle; turn it off and the signal will need to be boosted by pre-amp circuitry on board an amplifier or by an external phono stage.

So if the owner’s system already includes sufficient amplification, it’s possible to compare the V2’s onboard amplification with that of the system into which it’s playing and make a decision based on perceived sound quality. This is an improvement on the original Alva TT, the ‘always on’ phono stage of which seemed a little unhelpful.

There’s also a switch to turn Bluetooth connectivity on or off, plus a button to initiate Bluetooth pairing. Unlike the majority of Bluetooth-equipped turntables, which are generally entry-level devices that prioritise convenience over all else, the Alva TT V2 is deadly serious about wireless streaming. So it’s specified to support the aptX HD Bluetooth codec, and can stream at an authentically high-resolution 24bit/48kHz.

Which means that if you want a turntable that can sit where you want it to, rather than where it insists on being, and deliver the audio goods wirelessly, well… Cambridge Audio continues to be the only game in town.

You get a very high-quality (and pricey) cartridge included in the box with the Cambridge Audio Alva TT V2. (Image credit: Future)

Unlike the majority of turntables, there are three ways of listening to the Alva TT V2: Hard-wired to an amplifier with phono amplification turned on; the same but with the phono stage turned off; and wirelessly via Bluetooth.

And while there are pretty obvious differences in the way the Cambridge presents your vinyl, its fundamental attitude doesn’t alter no matter the way you decide to listen to it. In all circumstances, it’s a poised, perceptive and engaging listen – and as long as you (and your music) aren’t permanently in ‘party on!’ mode, it’s a satisfying listen.

That it sounds better when hard-wired than when streaming wirelessly shouldn’t come as a surprise to anyone. What is quite startling, though, is just how accomplished the Alva TT V2 sounds when streaming via Bluetooth.

With a heavy reissue of Miles Davis’ Kind of Blue spinning and the turntable streaming to a Naim Uniti Star streamer/amplifier while physically connected only to power, the Cambridge sounds full, detailed and quite eloquent. There is more than enough detail retained to make the nuances of the musicians’ techniques apparent, and sufficient control of the entire frequency range to make the recording sound authentically like a performance. Bass is deep and agile, the top end is acceptably crisp, and the midrange communicates in unambiguous fashion.

The soundstage is reasonably well organised and quite expansive, and there’s never any possibility of one element of the recording intruding into the space of another. Low-level dynamic insight is good too – a recording like this is alive with minor harmonic variations, and the Alva TT V2 is pretty alert to them.

It’s not quite as successful where the broader dynamic peaks and troughs of a recording are concerned, though – it’s not as if the Cambridge sounds flat or operates at a single level, but the dynamic ebb and flow of a recording isn’t expressed as fully as it might be.

Using its own on-board amplification, the Cambridge gains a degree of positivity compared to its wireless sound. It’s still a smooth and detailed listen, but low frequencies gain a little alacrity where attack and decay are concerned while the top end is a little more assertive too. It’s just a more businesslike way to listen, even though the overall TT V2 sonic signature is much the same. When hard-wired, it’s just slightly snappier.

The internal amplification is indeed comparable to the Alva Duo phono stage on which it’s closely based, which is unequivocally a good thing. Unsurprisingly, though, it’s no match for the pricier Chord Huei phono stage – and while the Chord is disproportionately expensive in the context of the rest of this system, it does allow the Cambridge to fully demonstrate both what it’s capable of and what its limitations are.

The shaping of low frequencies steps up again when listening this way. Rhythmic expression becomes more certain, transient detail retrieval improves and the unity, the togetherness of the individual elements of a recording seems more natural and instinctive than before. Even an over-specified phono stage can’t help the Alva TT V2’s slight lack of dynamic potency, though, nor coax greater directness from its overall performance.

The Cambridge Audio Alva TT V2’s connection labelling is upside down, for when you’re leaning over the top, see? (Image credit: Future)

Should I buy the Cambridge Audio Alva TT V2?

Twitter is working toward ‘closing the transaction process’ with...

Watch SpaceX launch a Falcon Heavy for the first...

How online behavior turns people from Jekylls into Hydes

Benson: It’s too soon to tell how this will...

Timeline of crises that have rocked UK’s Boris Johnson

Acer says the Swift Edge is the ‘world’s lightest’...

This Year’s Oscars Will Be Historic. Will Anyone Care?

Yelp updates its Android app with a redesigned home...

Parthean cares about personal finance so you don’t have...

Enjoy playing ‘Fallout 5’ at some indeterminate point in...

Crisp convinces more investors that it will rid the...

Lecturers, Teachers and Royal Mail Workers Strike in One...

IKEA made a Matter-ready hub with a new smart...

Sloppy Use of Machine Learning is Causing a ‘Reproducibility...

With hospitalizations up, France weighs return to masks

‘I Was a Secret Service Agent. I Wouldn’t Have...

Hurricane Ian: ‘Worst thing ever in my whole life’

Twitter revives its developer conference after a seven-year hiatus

A Top Antitrust Lawyer on How Increased Competition Could...

Russian Navy’s massive submarine could set the stage for...

WNBA Star Sue Bird Says 2022 Will Be Her Final Season
Why Texas is the right fit for No. 1 recruit Arch Manning