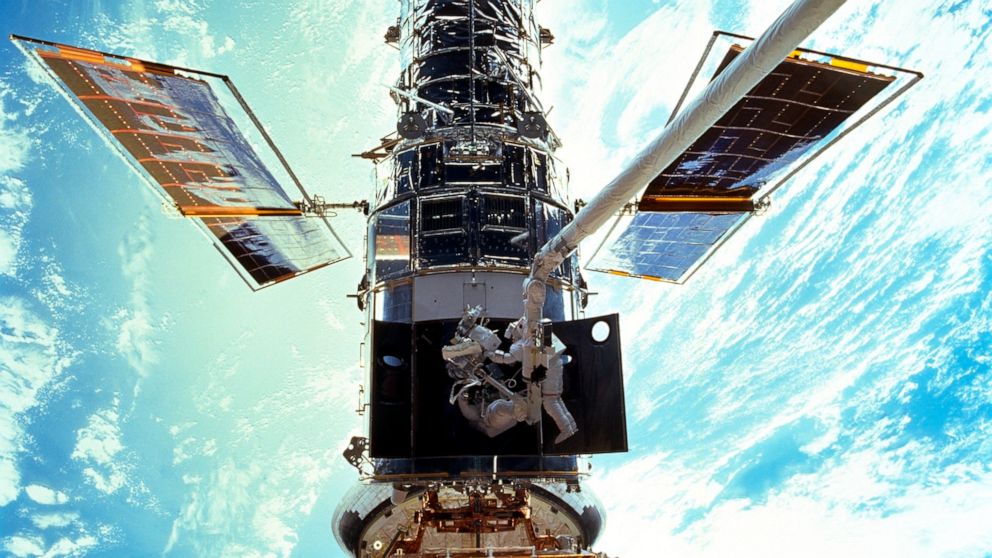 The orbiting observatory has been idle since Sunday when a 1980s-era computer that controls the science instruments shut down, possibly because of a bad memory board.

Flight controllers at NASA’s Goddard Space Flight Center in Maryland tried to restart the computer Monday, but the same thing happened. Theyre now trying to switch to a backup memory unit. If that works, the telescope will be tested for a day, before the science instruments are turned back on and observations can resume.

For now, the cameras and other instruments are in a so-called safe mode.

Launched in 1990, Hubble is showing more and more signs of aging, despite a series of repairs and updates by spacewalking astronauts during NASA’s shuttle era. The idled computer was installed during the fifth and final service call in 2009.

NASA plans to launch Hubble’s successor, the James Webb Space Telescope, in November. This observatory will be too far from Earth 1 million miles (1.5 million kilometers) away in a solar orbit for astronaut tune-ups. The launch from French Guiana using Europe’s Ariane rocket is years behind schedule; the latest delay of two weeks is the result of rocket processing and scheduling issues.

Scientists hope to have an overlap in orbit between Hubble and the considerably more advanced and powerful Webb. Biden to speak about U.S. response to Omicron as COVID variant continues to spread

The group wants to use Cumberland Basin for wild swimming but the council says it is too dangerous.
Read more

Macy's announced on Wednesday that people will once again be able to attend its annual Thanksgiving Day Parade in-person this year after the retailer barred attendance in 2020 due to the COVID-19 pandemic."Followin...
Read more

McLaughlin and Muhammad have been trading off setting world records in the women's 400-meter hurdles.
Read more

Watch Aileen McGlynn and pilot Helen Scott win silver for ParalympicsGB in the women's B 1,000m time trial at the Izu Velodrome on day two of the Tokyo 2020 Paralympic Games.
Read more

More than $72,000 in seized cash went missing from a central Kansas sheriff's department sometime after a drug bust on Interstate 70 in January 2017
Read more

Duncan Scott wins his third medal of the Tokyo Olympics and Great Britain's sixth in the pool with silver in the men's 200m individual medley.
Read more

The Texas House on Thursday moved forward a GOP-backed elections bill following Democrats' more than a month-long boycott of the legislation set to impose sweeping restrictions on voting in the state. ...
Read more

Disney and Marvel’s “Eternals” fell 61% in its second weekend in theaters, but it’s still hanging on to first place ahead of newcomers like “Clifford the Big Red Dog.”
Read more

Emma Raducanu plays tennis with the Duchess of Cambridge

Dozens have been killed in a huge earthquake in the center of Italy. The mayor Amatrice says his town "isn't here anymore." CBS News' Seth Doane is there with the latest on rescue efforts.
Read more

Most Jewish Israelis do military service. But a small number, like Shahar, take an ideological stance.
Read more

But Downing Street rejects calls to apologise for Boris Johnson's remarks on a visit to Scotland.
Read more

Yamaha’s latest wireless earbuds look after your ears by...

Yamaha has launched a new pair of wireless earbuds that prioritise your hearing health.
Read more

Currys has some top-notch laptop deals with a Windows machine and Chromebook which are seriously affordable.
Read more

Debunking claims shared widely on social media about cremations in the UK and US vaccine statistics.
Read more

Beds full at Kansas City hospitals amid surge in...

The University of Kansas Health System beds are full and are causing transfer patients to be turned away amid a surge in coronavirus cases."I think we're at a tipping point," the sys...
Read more

California Gov. Gavin Newsom (D) said in a new interview that he regrets mistakes he made in handling the state's response to the coronavirus outbreak over the last year.But the embattled governor rejected a petiti...
Read more

Royal Caribbean is announcing a U.S. summer schedule for eight of its cruise ships
Read more

Cash is alive and thriving in the euro zone despite the rise of debit cards and contactless payment, and the pandemic has even accelerated that trend, according to the European Central Bank.
Read more

Fujifilm Instax cameras plummet to lowest ever prices in...

Two of our favourite Fujifilm Instax cameras have just dropped to their lowest prices ahead of Black Friday.
Read more

ICE on Monday was told to stop using the term "illegal alien" when referring to immigrants.
Read more

Two explosions rocked the Ugandan capital's city center within 30 minutes of each other on Tuesday, according to police and a journalist at the scene of one of the blasts.
Read more

Luckin Coffee Had a U.S. Listing Disaster. It Might...

Some of the staff members have already arrived at the airport protected by U.S. troops ahead of a likely onslaught by the militants who have swept across the country in recent days.
Read more

Biden woos GOP with sweet infrastructure words, but is...

Revel is a ride-sharing startup that uses Tesla's in New York City. Frank Reig is the CEO. He's on Quicktake.
Read more

The Real Infrastructure Week Is Here

Hello. Today we look at whether President Joe Biden’s investment push is likely to get support from Republicans, the American infation outlook and prospects for an acceleration in the global economy in the second quarter.The Battle Over Infrastructure
Read more

Veteran left-hander Cole Hamels will hold a showcase for interested teams on July 16 in Texas, according to multiple reports.
Read more

American and Southwest Airlines are reporting that they made profits in the third quarter, thanks to large amounts of government pandemic relief
Read more

Pfizer is looking for Food and Drug Administration authorization of its coronavirus vaccine for children ages 5 to 11. Dr. Jodie Guest, vice chair of the epidemiology department at Rollins School of Public Health at Emory University, joins Tanya Rivero on CBS…
Read more

The settlement was made with some 60,000 people over historic claims sexual abuse spanning decades.
Read more

African leaders as well as ordinary Zambians have gathered Friday in the southern African country to attend the memorial service for Kenneth Kaunda, the nation’s founding president and supporter of African nationalism
Read more

National security adviser Jake Sullivan potentially could be in the unenviable position of having to argue that he was not perjurious, just clueless, in denying knowledge of key facts to Congress.
Read more

Republican rivals aimed some of their most pointed shots yet at Elder since the Sept. 14 recall election was certified last month.
Read more

With the election nearly five weeks away Donald Trump is opening a new line of attack on Hillary Clinton - targeting former President Bill Clinton's past infidelity; Elon Musk, the California billionaire behind Tesla and SpaceX, has unveiled plans to turn the…
Read more

A leader of a new pro-Beijing political party said an overhaul of how Hong Kong picks its leaders could weaken property interests enough to enact policies to address the financial hub’s infamous housing issues.
Read more

Iran dissidents warn of regime’s use of drones to...

Iranian dissidents are warning of the hard-line regime’s use of drones to cause instability in the region, saying it is using the technology – materials for which are being imported from China – to make up for the weaknesses of its air force.
Read more

Issues of race were rarely discussed in Decorah, until a death 160 miles away changed everything.
Read more

Why is the Great Barrier Reef in trouble? A...

Thoughtful wedding gifts for every budget

Weddings are back. Here's how to shop for them, even if the couple doesn't have a gift registry or wish list.
Read more

The White House plans to announce the shipment Monday, according to a White House official.
Read more

The 17-year-old Prosper resident left the hospital on Wednesday, where she had spent more than three weeks after suffering a severe spinal cord injury.
Read more

A middle school teacher received a $16,000 tax bill after he raised over $41,000 on Facebook to help his neighbors pay for food and rent during the coronavirus pandemic.Louis Goffinet originally ...
Read more

Democrats should spike the football

Jill Filipovic writes that Americans can thank Democrats for the new stimulus package providing much-needed relief to millions around the country who are struggling due to the Covid-19 pandemic. Democrats should remind voters and take their due credit.
Read more

Apple is asking users how they monitor blood glucose, but it may not be a simple answer for people with diabetes.
Read more

Zack Snyder has revealed his plans for two abandoned Justice League sequels, including one where Superman's son becomes the new Batman.
Read more

Warwickshire close on 179-1 at Edgbaston needing quick runs to stand a chance of forcing victory over Somerset to win the title.
Read more

President Joe Biden’s administration is calling on states and local governments to provide $100 to people who get vaccinated using the $350 billion of aid that his administration has provided them.
Read more

A new era begins in Spain as the country experienced its first royal transition since democracy was restored in the 1970s. Mark Phillips reports on the coronation of King Felipe VI.
Read more

David Wellington from Bristol is using Olympic wrestling to help him adapt to life after sepsis.
Read more

Erdogan Again Hints at Offensive Against Kurdish Forces in...

Sign up for our Middle East newsletter and follow us @middleeast for news on the region. President Recep Tayyip Erdogan vowed to consolidate security lines...
Read more

Of the six people who were critically wounded in a shooting at a Tennessee supermarket on Thursday, five are now in good condition and another remains in serious condition but is improving. Angie...
Read more

A third wave of coronavirus cases in South Africa’s commercial hub of Gauteng may have peaked after daily infections surged to a record last week.
Read more

The author of “Fire and Fury,” the million-seller from 2018 that helped launched the wave of inside accounts of the Trump White House, will have a last look coming out next month
Read more

Teachers and faculty using Microsoft Teams will soon be able to use suggested replies to quickly answer questions in chats.
Read more

After more than a month of standstill in the state House, three Houston Democrats returned to the state House floor on Thursday to bring the chamber to quorum.
Read more

Presented by Facebook Good Thursday morning, Illinois. POLITICO honors Juneteenth tomorrow, so were taking the day off. Well be back in your inbox Monday....
Read more

The Food and Drug Administration is planning to put a label on Johnson & Johnson's COVID-19 vaccine warning that the vaccine has been linked to rare cases of Guillain-Barré syndrome (GBS), a neurological disorde...
Read more

The OnePlus 9 and OnePlus 9 Pro have both been revealed, and we're reporting on what you can expect.
Read more

Looking back at the life of Tupac Shakur on what would have...