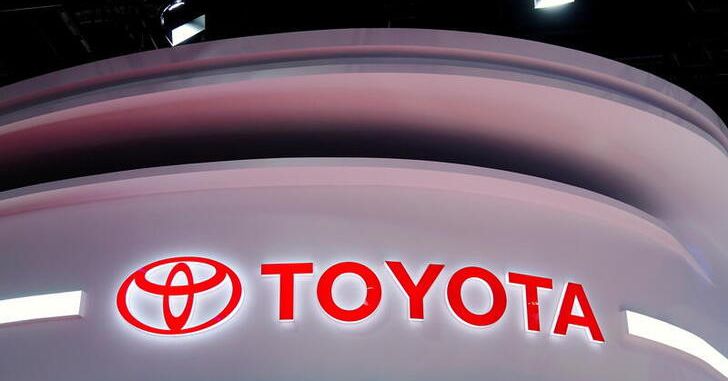 The Toyota logo is seen at its booth during a media day for the Auto Shanghai show in Shanghai, China, April 19, 2021. REUTERS/Aly SongTOYOTA CITY, June 16 (Reuters) – Toyota Motor Corp’s (7203.T) shares reached a record high on Wednesday, earning a rare message of thanks from the company’s president at its annual general meeting (AGM).

The share price of Japan’s no. 1 carmaker exceeded 10,000 yen ($90.84) on Tuesday for the first time, as investors welcomed Toyota’s strong sales, electric plans as well as its ability to tackle a global chip shortage better than the competitors.

The share reached 10,330 yen on Wednesday, a record high, valuing the company at more than $301 billion. U.S. electronic carmaker Tesla Inc (TSLA.O) is valued almost twice that by investors at $577.38 billion.

“It could be accidental that our share price topped 10,000 yen as we prepared for the meeting, but we were so much encouraged because of it,” said company president Akio Toyoda at the AGM held at Toyota’s headquarter in Toyota City, Nagoya.

“We have made actions, errors and improvements. What we have now is the result of those 12 years,” Toyoda said, when asked by a shareholder to reflect on his presidency as Japan’s no.1 automaker for over a decade.

Toyota has said it will increase its number of electric models to around 70 from currently offered 55 by 2025, while aiming to make all its global factories carbon neutral by 2035.

The carmaker, which looks to fully redesign itself to a mobility company, needs to bring in multiple viewpoints and values as a driving force of creating innovation, Toyoda said. The names to know as Biden mulls Breyer’s replacement

Build Back Better: The challenge of selling a hybrid on Capitol Hill

Ellie Goulding ‘healthy and happy’ after birth of first...

The singer and her baby are both "healthy and happy", her husband says.
Read more

Win the elusive PS5 in this eBay Plus giveaway

eBay is giving away PS5 prize packs to 24 lucky winners. To be in with a chance, all you need to do it sign up for eBay Plus.
Read more

Kinzinger: Republicans who join ‘America First Caucus’ should be...

Extra pay for non-White teachers ‘racist,’ an attempt to...

The Federal Reserve earned $88.6 billion in 2020 and paid back to the federal government $86.9 billion, the largest Fed payment to the government in four years
Read more

More and more spilled benchmarks are indicating that Alder Lake could be a big step forward for Intel.
Read more

More American Adults Say They Don’t Expect to Have...

A growing share of U.S. adults who aren’t already parents say they probably won’t have children, citing reasons such as apathy, financial instability or the lack of a partner.
Read more

Your auto-payment for Amazon, Netflix may fail from tomorrow...

Banks have started alerting their credit card customers that any standing instruction for recurring transactions will not be approved by the banks beginning April 1, 2021. This is due to a Reserve Bank of India notification on e-mandate.
Read more

The mother of a boy who entered a gorilla exhibit at the Cincinnati Zoo called 911 in a panic as she watched her son below with 450-pound Harambe. The gorilla was shot and killed, so the boy could be rescued. Jamie Yuccas is following this.
Read more

A sheriff's deputy in Georgia was demoted this week and suspended for five days after he left a K-9 dog in a hot patrol car, causing the animal to die.Monroe County Sheriff Brad Freeman mourne...
Read more

Adviser suggests Biden still wears mask outside out of...

Former U.S. Envoy to Afghanistan on trusting the Taliban...

Mike Richards is the new host of "Jeopardy!" - taking the reins at the legendary game show following the death of Alex Trebek.Richards, a "Jeopardy!" executive producer, was named the show's permanent host on Wedne...
Read more

Goldman Will Require Covid Boosters, More Tests as It...

Australia’s government debt manager is paring back the information it provides to the market on issuance plans, in order to gain more flexibility as the economy recovers from the pandemic.
Read more

The Ashes: Usman Khawaja reaches his second hundred of...

England midfielder Jack Grealish says he "will cherish every moment" of Euro 2020 as he prepares for his first major tournament.
Read more

Boris Johnson’s mission to rebalance the scales is a great excuse for a pounds-and-ounces puzzle.
Read more

BNP Paribas to sell Bank of the West to...

BNP Paribas (BNPP.PA), France's biggest bank by market capitalisation, said it had agreed to sell its U.S. unit Bank of the West to Canada's BMO Financial Group for around $16.3 billion.
Read more

At least two people have died in the U.K. after the year’s first winter storm battered parts of the country with gusts of nearly 100 mph (160 kph)
Read more

Gordon is the president of the National Community Stabilization Trust, which facilitates the rehabilitation of homes in underserved markets.
Read more

Like a cowboy’s therapy: The Green River Drift’s 70-mile...

Bill Whitaker saddles up for one of the last enduring symbols of the Old West, a Wyoming cattle drive that travels the same route pioneered 125 years ago.
Read more

Texans are being asked to conserve energy through Friday as temperatures in the state climb, approaching record levels.The Electric Reliability Council of Texas (ERCOT) issued a ...
Read more

The U.S. trade deficit grew to $71.1 billion in February, as a decline in exports more than offset a slight dip in imports
Read more

DeSantis to offer new correctional officers bonus up to...

Will Levis threw for three touchdowns and ran for two more scores and No. 16 Kentucky dominated LSU throughout in a 42-21 blowout Saturday night.
Read more

A major U.S. fuel pipeline operator was forced to shut down its entire network after a cyberattack that the company says was caused by ransomware. Christina Ruffini has more.
Read more

Pedestrian dies after being hit by police van in...

The 58-year-old woman was fatally injured in Motherwell on Sunday evening.
Read more

At least two people have been injured in a large fire that erupted from the roof of a New York City hospital Friday evening, with authorities still investigating the cause.
Read more

Anti-immigration demonstrators protesting the rising numbers of people attempting to reach the U.K. by crossing the English Channel in small boats have blocked trucks traveling to a cargo terminal
Read more

Sen. Richard Burr (R-N.C.) issued a scathing memo criticizing the Centers for Disease Control and Prevention's (CDC) response to the coronavirus pandemic, calling for "structural" reform of the agency following what he ca...
Read more

He was well known for appearing on the Channel 4 series alongside his wife and two children.
Read more

Lewis Hamilton qualifies fastest for the Turkish Grand Prix but will start the race 11th after a 10-place grid penalty for breaking engine rules.
Read more

Sen. Roy Blunt said he hoped it sent a message to law enforcement "that we are united in our appreciation of all they do to keep us safe.”
Read more

Crews rescue 4 people in boat hanging over side...

Four people were rescued from a boat that got caught partially hanging over a dam in a Texas reservoir Thursday. Lady Bird Lake. Austin.
Read more

Watters: Democrats can’t control the narrative when people are...

Fox News host Jesse Watters slammed Democrats and their efforts to stamp out dissent to their far-left agenda during his opening monologue Saturday.
Read more

A series of Democratic Senate candidates announced substantial fundraising hauls this week, putting each campaign in strong financial positions ahead of races that will be critical to the Biden administration's goals.
Read more

He is best known for his work on a Stockton pilot project that provided $500 a month to a small group of low-income residents.
Read more

Nine years after being assaulted by a boy she alleges was a student at Eton College, Zan Moon can still remember the moment as if it was yesterday.
Read more

The AstraZeneca vaccine is not linked to an increased risk of blood clots and its benefits outweigh the risks, the European Union’s drug regulatory agency said.
Read more

Minnesota pileup on Interstate 94 involves as many as...

A stretch of snowy eastbound Interstate 94 reopened in Minnesota on Christmas Day after a pileup that involved as many as 50 vehicles, according to reports.
Read more

Here are the Macs left out in the cold with Monterey, with two years of MacBook models getting the elbow.
Read more

A San Diego-area school district voted to dismiss JD Laaperi after tortillas were hurled at a team from a mostly Latino school. Many saw that as racist.
Read more

Despite 22 arrests police say one of the largest protests in memory was "largely without incident".
Read more

Robert Durst’s defense says client had no motive, did...

In a blunt rejection of what prosecutors told jurors a day earlier, a defense lawyer said Wednesday that multimillionaire Robert Durst had no motive to murder his close friend Susan Berman and had nothing to do with her shooting.
Read more

Virginia's outgoing Democratic governor, Ralph Northam, faced multiple calls for his resignation following a blackface scandal in 2019, with Sen. Tim Kaine, D-Va., demanding Northam step down. Yet Northam did not resign, and Kaine recently said he was “glad” …
Read more

Nigeria jailbreak in Kabba: Prisoners on the run after...

About 240 inmates were freed after armed attackers stormed the facility in Kogi state on Sunday.
Read more

The national party is sending more than 100 organizers to work in the race between Republican Glenn Youngkin and Democrat Terry McAuliffe.
Read more

A federal report finds that in the run up to the 2020 presidential election U.S. states and territories had spent less than a third of the $805 million Congress had provided to shore up security for state and local election systems
Read more

Across the country, historical markers have in some places become another front in the national reckoning over slavery, segregation and racial violence.
Read more

Brendan Óg Ó Dufaigh lost his life just hours after he captained his county to a semi-final win.
Read more

Fanatics Continues to Dominate The Apparel Space In NFL

Asia’s hardware technology stocks, led by chipmakers, are getting back in the spotlight as China’s regulatory onslaught casts a shadow over some of the region’s biggest and hottest software names.
Read more

The Biden administration told Congress that more than 300 U.S. citizens are still in Afghanistan, 176 of whom want to leave.In a Thursday briefing, the State Department told congressional staf...
Read more

Most businesses underestimate the risk of a cyberattack

Overconfidence in security infrastructure, despite evidence to the contrary, is a leading impediments to security OT, survey finds.
Read more