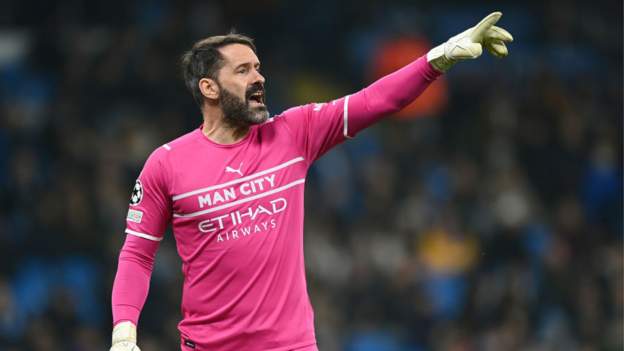 Scott Carson (right) replaces first-choice keeper Ederson for his only first team appearance of the 2021/22 season in the Champions League tie against Sporting Lisbon at the Etihad in March.

The former England international, 36, first joined on loan from Derby in 2019, before making the move permanent last season.

Carson, who has started just one game for City – a 4-3 win against Newcastle in May 2021. – was out of contract at the end of the month.

“His experience is of real benefit to the entire squad. His teammates, especially the goalkeepers, have great respect for his achievements in the game,” added Begiristain.

Carson came on against Sporting Lisbon in the Champions League in March for just his second appearance for the club.

He made his senior debut for Leeds in 2004 and also played for Liverpool, Sheffield Wednesday, Charlton, Aston Villa, West Brom, Turkish side Bursaspor and Wigan during his career.

Real Madrid 5-1 Celtic: How do Ange Postecoglou’s side...

Oil Prices Steady Above $100 After Jumping on Russia’s...

Elizabeth Holmes Should Get 15 Years’ Prison for Fraud,...

UAE’s Jaber says COP28 should be practical, leave no...

‘Attack on Titan’ Fans Are Left ‘Speechless’ as the...

NASA is planning a huge computing upgrade for its...

Amberdata raises $30M to chase the “unlimited opportunity” of...

This week’s best new trailers, from Obi-Wan Kenobi to...

‘That is it from us here on Sunday Morning’...

Apple staff are already using ‘Tap to Pay’ at...

US strikes Iran-backed groups’ facilities in Syria after base...

Odd Lots Newsletter: The Revenge of the Physical World

Q&A: Should I Get Another Shot? – Bloomberg

Lawyer gets prison for laundering millions in drug money

Your gas stove is safe. Federal government turns down...

NRA Slammed Over Tweet In Wake of Buffalo Mass...

EXPLAINER: Who is leading the crackdown on Iran’s protests?

Balance of Power: Where Did SBF’s Political Donations Go?(Radio)

Trickle of New Listings Hints at IPO Thaw: The...