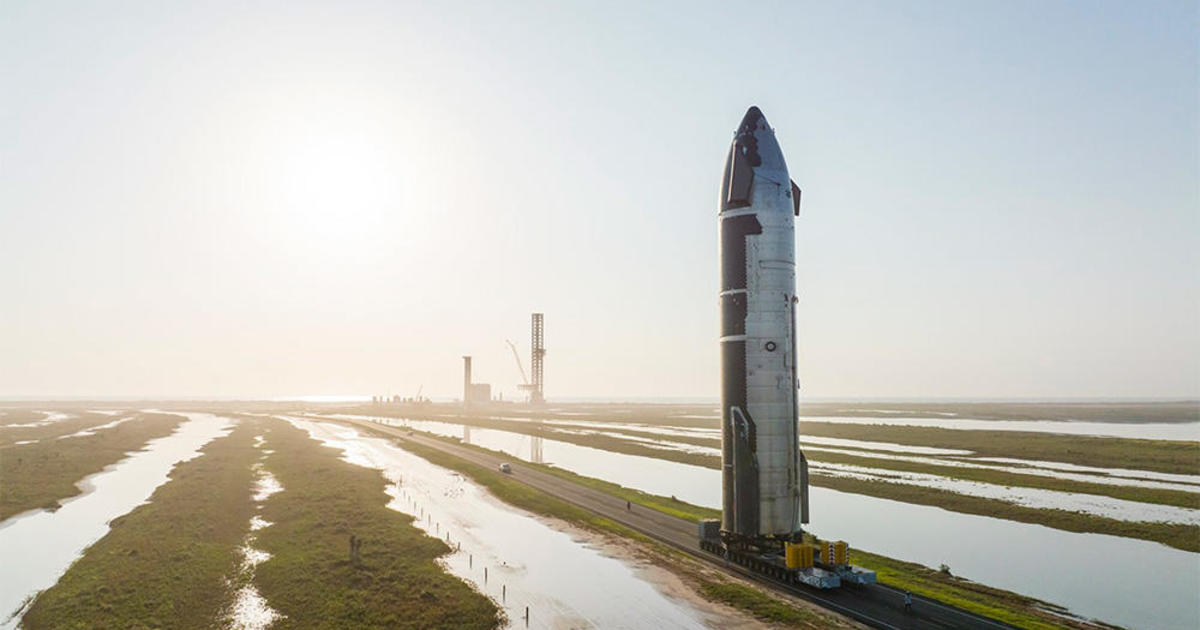 “The FAA determined that the Proposed Action would not result in significant environmental consequences and has issued a Mitigated Finding of No Significant Impact/Record of Decision,” according to the FAA’s executive summary of the Programmatic Environmental Assessment, or PEA.

“Should any future license or permit be issued to SpaceX to perform any aspect of the Proposed Action, the FAA will ensure that SpaceX implements (specified) mitigation measures as conditions for licensure.”

A SpaceX Starship is rolled to the launch complex near Boca Chica, Texas, for testing.

But the FAA concluded a more involved Environmental Impact Statement will not be necessary. If all goes well, SpaceX may be able to press ahead with a long-delayed orbital test flight of its Starship-Super Heavy rocket in the next several months.

Tweeted SpaceX: “One step closer to the first orbital flight test of Starship.”

One step closer to the first orbital flight test of Starship https://t.co/MEcQ6gST6Qpic.twitter.com/jxqEsM62gc

The successful conclusion of the programmatic assessment is a major victory for SpaceX founder Elon Musk, who views the Starship vehicle as the company’s future and a key step toward human exploration of the solar system.

But the decision was a blow to environmentalists and members of the public who argued Starship operations will damage the South Texas coastal environment and cause harm to wildlife and nearby communities. It’s not yet known whether any legal challenges might be mounted.

“SpaceX has shown a blatant disregard for Boca Chica’s natural habitats,” the American Bird Conservancy said in a statement. “The area here is not just empty space for fuselage debris and waste.”

SpaceX has shaken up the domestic and international launch industry with its relatively low-cost, partially reusable rockets.

The company’s workhorse Falcon 9 is a two stage medium-lift rocket with a reusable first stage and nose cone fairing that has flown 157 times since its maiden flight in 2010, and 23 times this year alone. The rocket is used to launch civilian and government satellites and Cargo Dragon capsules carrying supplies and equipment to and from the International Space Station.

The Starship-Super Heavy launch vehicle, seen here during propellant loading tests, stands 400 feet tall and measures 30 feet wide. It is the largest, most powerful rocket ever built. SpaceX hopes to launch the huge booster on its first test flight to orbit later this year.

The Falcon 9 also is used to launch Crew Dragon spacecraft carrying U.S. and partner agency astronauts to and from the space station, ending NASA’s post-shuttle reliance on Russian Soyuz spacecraft. To date, SpaceX has launched five NASA crews to the space station and two civilian crews, one to the station and one to low-Earth orbit.

But the Super Heavy and Starship rockets SpaceX is designing and wants to launch from Boca Chica and the Kennedy Space Center in Florida are in a class by themselves.

The reusable first stage — the Super Heavy — will be powered by 33 Raptor engines burning liquid oxygen and methane fuel, generating a combined 16 million pounds of thrust, or twice the liftoff power of NASA’s Space Launch System moon rocket. Musk tweeted a picture of the Super Heavy’s engines over the weekend.

The reusable upper stage — the Starship — will use six to nine Raptor engines and will be able to launch cargo, astronauts or both. SpaceX has a $2.9 billion contract to develop a version of the Starship to serve as a piloted lander, carrying the first NASA astronauts back to the lunar surface in the agency’s Artemis moon program.

Together, the Starship and Super Heavy rocket will stand 400 feet tall and measure 30 feet wide, a gargantuan rocket that will dwarf any space vehicle ever built.

SpaceX has launched multiple test flights of Starship prototypes from Boca Chica using up to three Raptor engines at a time to reach altitudes of up to nearly nine miles. Several vehicles exploded in flight, during touchdown or just after landing, but SpaceX’s most recent test flight in May 2021 was a complete success.

An artist’s impression of a SpaceX Starship on the surface of the moon.

SpaceX has “stacked” a Super Heavy and Starship on a launch pad at Boca Chica, but the super rocket has not yet been launched. For its initial orbital test flight, the company intends to “land” the Super Heavy in the Gulf of Mexico while the Starship climbs to space, circles the planet and splashes down in the Pacific Ocean near Hawaii.

With Monday’s finding that an environmental impact statement is not required for Boca Chica, the FAA presumably will now be able to consider a launch license, assuming SpaceX meets the mitigation requirements.

The FAA began its environmental review of SpaceX’s plans for Boca Chica in November 2020, but the long-awaited report was delayed four times after agency officials said SpaceX made multiple changes to its original application. In addition, the FAA had to respond to some 18,000 comments from the public.

Apparently worried about a possibly negative outcome, Musk said SpaceX would consider moving all its Starship-Super Heavy launch operations to the Kennedy Space Center where the company already leases pad 39A, a former Apollo and space shuttle launch complex.

SpaceX is building a Super Heavy pad at launch complex 39A, where Musk has said the company will launch “operational” missions. But SpaceX wants to carry out test flights at Boca Chica, and the FAA review, after months of delay, has moved the company a major step in that direction.

William HarwoodBill Harwood has been covering the U.S. space program full-time since 1984, first as Cape Canaveral bureau chief for United Press International and now as a consultant for CBS News. He covered 129 space shuttle missions, every interplanetary flight since Voyager 2’s flyby of Neptune and scores of commercial and military launches. Based at the Kennedy Space Center in Florida, Harwood is a devoted amateur astronomer and co-author of “Comm Check: The Final Flight of Shuttle Columbia.”

The Altrincham FC superfan with big hopes for a...

Putin Pulls the World Into a Perilous Unknown

What happens when all the banks leave town?

WSL: Arsenal will be a ‘good test’ for Liverpool...

Macron on Track for Another Run at Revamping the...

This long-lost Microsoft Edge feature may be making a...

Unexpected connection between Judge Jackson and a famous civil...

Man accused of posting threats to law enforcement after...

UK govt touts financial aid as it aims to...

Coalition kicks off campaign to engage Black voters ahead...

When We Eat Can Affect Mental Health…

How bad are the ‘iPhone city’ riots for Apple...

Were LeBron’s ‘winning’ comments a sign for his Lakers...

Three ‘known’ Kepler exoplanets are more likely to be...

Bob Saget’s autopsy completed: ‘No evidence of drug use...

UK inflation eases for a 2nd month, falling to...

World Cup finals play-offs to be shown live on...

Is Keir Starmer right that wages have been ‘stuck...

First Look: All Star Shore Is Going To Be ‘The Ultimate Party’