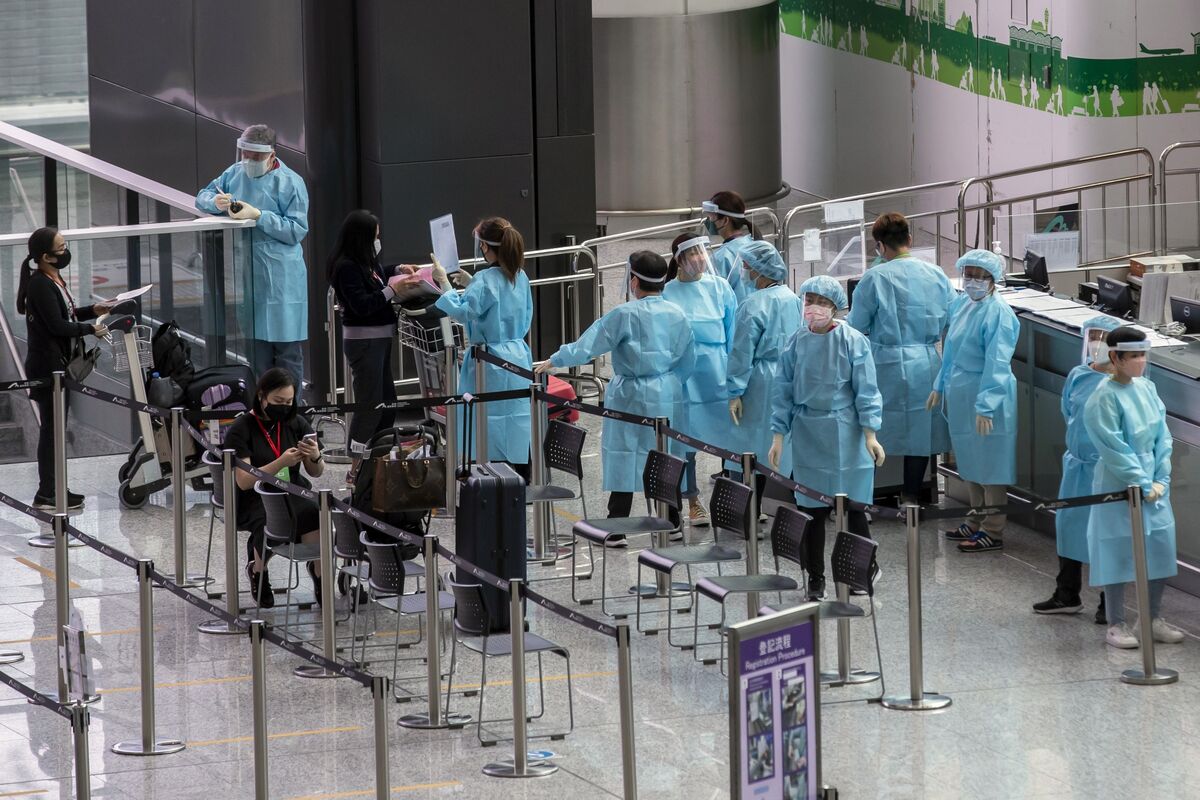 Hong Kong saw Covid-19 infections detected among overseas travelers jump to a pandemic record after an easing of border restrictions led to a surge in international flights.

The city reported 106 imported cases on Sunday, the first time the number hit triple digits since early 2020 when the record-keeping began. There were 814 total new infections, a slight dip from the two-month high of 851 recorded on Saturday.

The spike, which will test officials resolve to maintain a looser virus policy than mainland China, is being driven by relaxations in social distancing measures and travel restrictions after Hong Kongs record-setting outbreak earlier this year ebbed.

In recent months, authorities halved hotel quarantine for new arrivals to seven days, allowed non-residents to enter the city again, and eased the system of flight suspensions for airlines that brought in people who tested positive for the virus.

The number of passenger flights arriving daily in Hong Kong has accordingly doubled to 38 in June, up from 19 in April before most of the easing was implemented, according to data from the Airport Authority and Webb-Site.com. Its difficult to get a true measure of passenger numbers from the early days of the pandemic, when many flights were bringing in cargo only.

Queuing up to Land

The rise in both overall infections and imported cases will pose a test for the government currently preparing for the 25th anniversary of the citys handover to China on July 1. President Xi Jinping, who has implemented a zero tolerance approach to the virus in mainland China and hasnt traveled since the pandemic began, will potentially visit the financial hub for the occasion.

no changes to policy in the remaining weeks of her term, incoming leader John Lee has given little indication of his governments Covid priorities.

Any re-imposition of strict Covid measures would be met with fierce objection by the business community, which has argued that the citys rules are eroding its status as a global financial hub, especially as the rest of the world opens up.

Some local health advisers believe its time for the city to prepare to move beyond the pandemic. Hong Kong has met the conditions for reopening to the rest of the world because most people with recent infections had only mild symptoms, said Daivd Hui, who advises the government on Covid matters, on a radio program on Saturday.

With a low number of severe cases and deaths, as well as a high vaccination rate, people shouldnt be worried about a new outbreak, Hui said. Another prolonged period of Covid Zero would be costly, he said, citing Shanghai as an example. The city was locked down for two months, causing a shortage of food, limited access to health care services and plunging factory production.

About 88% of Hong Kongs population had been fully vaccinated as of Sunday. No new deaths were reported, while there were three new severe cases that day. A total of 15 patients with severe Covid are currently hospitalized for treatment.

With assistance by Linda Lew Hiring slowed in August as unemployment rate ticked up

US assures nervous Baltics of NATO protection against Russia

For pregnant women, war is a particular kind of...

Russian hackers have infiltrated US defense contractors, CISA and...

Canada has a massive surplus of unused ventilators

Macron Thanks Voters in Victory Speech

Woman Dragged for Buying Blender Instead of $30 Necklace...

A House panel will investigate the handling of reproductive...

Awesome New ‘Guardians of the Galaxy’-Themed Merchandise Coming to...

8 dead after U.N. helicopter shot down by rebels...

Drought Is Threatening Hydropower in the Southwestern US

The Portable, Off-Grid 3D Gigalab Can Turn Trash Into...

Look to the Sky: How Disney Helps Protect the...

Bloomberg Wealth: What a Surging US Dollar Means for...

Beauty Queen With a Genetics Degree Encourages Women in...

New Adler Group chairman has not yet had contact...

Wildfires thrive amid 'dangerous heat' in the Southwest