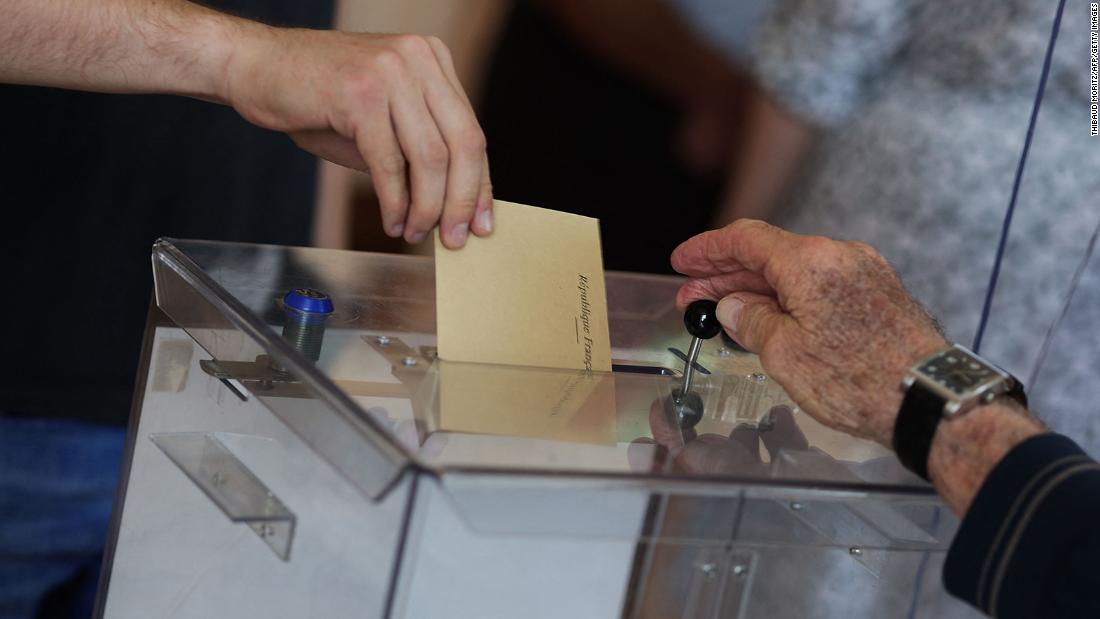 Based on 90 percent of the total votes counted on Sunday evening, Ensemble has collected 25.37 percent (5.1 million votes), while the pan-left NUPES led by Jean-Luc Mélenchon has so far gathered 24.31 percent (4.9 million votes), partial results from France’s Interior Ministry showed.

A second round of voting is scheduled for June 19. If after that Ensemble falls short of the 289 threshold for an absolute majority — which major pollsters are projecting as a possibility, Macron will become the first reigning French president to not win a parliamentary majority since the 2000 electoral reform.

“The truth is that the presidential party, after the first round, is battered and defeated,” Mélenchon claimed on Sunday after early projections were announced.

Sunday’s voting was shadowed by low voter enthusiasm, with voter turnout projected at 47 percent according to Interior Ministry data — the lowest for the first round of parliamentary elections since 1958, when the current French Fifth Republic was established.

Partial results from the Interior Ministry also indicated the far-right National Rally and established right-wing party The Republicans and its allies lagging behind, with 19.9 percent and 10.58 percent respectively. Meanwhile, rightwing political commentator Éric Zemmour, — whose new far-right party Reconquest! had gathered less than 5% percent of the vote in early results — has not qualified for the next round of voting for the parliamentary seat he had targeted.

Just like the presidential election, parliamentary elections in France function on a two-round system. If no one wins more than half of the vote in the first round, then all candidates who received at least 12.5 percent of registered voters qualify for a second round.

The Élysée announced in May that government ministers who are defeated in the parliamentary elections will have to resign from their cabinet posts.

Among the 15 minister-level officials standing for election, multiple are at risk of losing including Clément Beaune, Minister Delegate for Europe who has been prominent in France’s response to the Ukraine crisis.

A Harvard professor who helped Bill Clinton balance the...

Hotspot producer Helium considering a new blockchain. Does it...

Shot dead by Sri Lankan police while trying to...

Sam Elliott apologizes for ‘Power of the Dog’ criticism:...

Greg Gutfeld: The left has ‘literally flipped’ over abortion

Singapore to decriminalize sex between men

Bentley Motors blends tech and coachbuilding in the 2022...

British Grand Prix: ‘I feel bad saying no to...

Why China Sticks With Costly Lockdowns and ‘Zero COVID’

Sabalenka and Garcia win as four other seeds fall

WHO advising governments to stockpile medicines for ‘nuclear emergencies’...

Instagram will begin testing a new repost feature with...

‘Judas’ is the first project from BioShock creator Ken...

Peloton gives up on building its own products after...

Biden welcomed back to Georgia after laying low in...

Meta’s anti-misinformation strategy for the 2022 midterms is mostly...

What time is House of the Dragon episode 3...

Ex-Gulf Cartel boss gets life sentence in Texas for...

The Instant Vortex Plus air fryer is on sale...

Algorithms Allegedly Penalized Black Renters. The US Government Is...

Trump Knew He Lost Election—or Is Incapable of Being President: Kinzinger