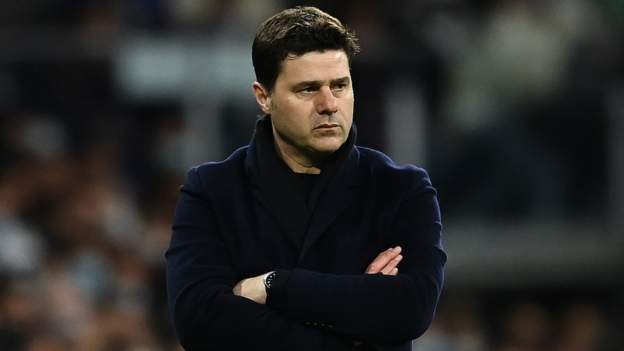 Coach Mauricio Pochettino is to leave Paris St-Germain following talks with the club at the end of last week.

PSG are still to make a formal announcement but it is understood the former Tottenham manager, 50, will not serve the final year of his contract.

Zinedine Zidane, Jose Mourinho and Nice coach Christophe Galtier are among those linked with replacing Pochettino.

PSG regained the French title last term but the Argentine failed to lead them beyond the Champions League’s last 16.

Although they were beaten by eventual winners Real Madrid, PSG held a 2-0 aggregate advantage with less than half an hour remaining in their second leg.

Pochettino claimed the first trophies of his managerial career with PSG – the 2021 Coupe de France and 2022 Ligue 1 title – but the club’s hierarchy felt that was the minimum he should achieve given the squad at his disposal.

The ex-Spurs manager was considered a potential replacement for Ole Gunnar Solskjaer at Manchester United before they appointed interim boss Ralf Rangnick and then Solskjaer’s permanent successor Erik ten Hag.

Chiefs’ Patrick Mahomes ‘expecting a battle’ against Steelers in...

Starmer accused of acting like a monarch in PR...

Texas Abortion Clinics Head Back to Court to Fight...

Covid: Half of Nightingale Courts to close within weeks

Mega Millions jackpot now over $1 billion after no...

Five things to know as US, Russia seek Ukraine...

Title race is back on in EPL after Harry...

Russians search for BBC, outside news outlets amid Putin...

H&M says to wind down in Russia

Funeral for Uvalde girl who dreamed of going to...

Researchers attempt to identify giant fireball that streaked across...

Man found in car at bottom of cliffs in Cornwall