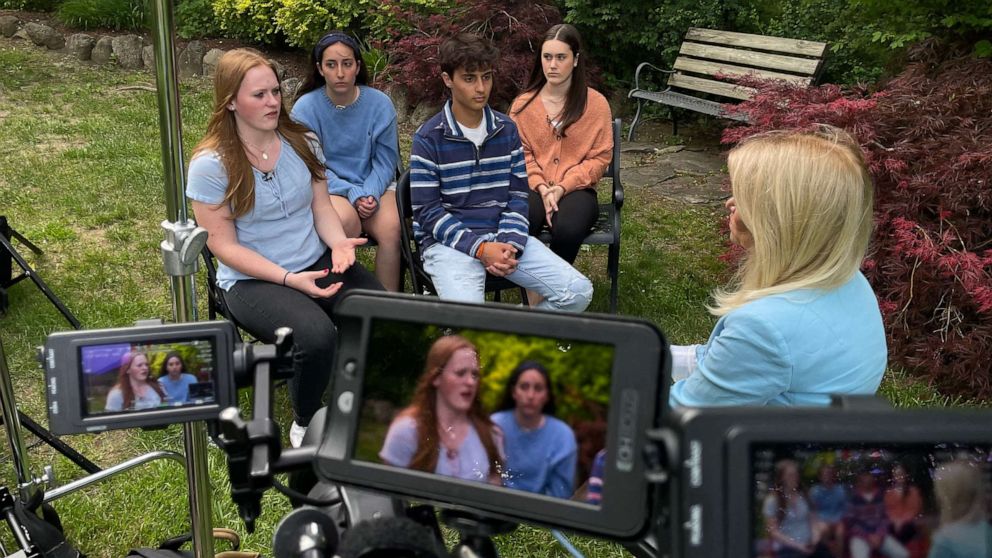 “I couldn’t handle it,” she said. “You hear about other shootings and it breaks you. But the fact that it was the exact same thing completely re-triggered me and my anxiety.”

Nicole was in the second grade when a gunman shot and killed 26 people at her school in Newtown, Connecticut, in December 2012. She and three other student survivors, as well as a school employee there that day, detailed their experience and the effects that day still has on them in an interview that aired Sunday with “This Week” co-anchor and Chief Global Affairs Correspondent Martha Raddatz.

Out of respect for their privacy, ABC News is not using the survivors’ last names.

“I was just thinking about all the families that are in their houses right now, telling their children that their siblings and that their friends and their classmates are gone,” Maggie, another student, told Raddatz. “It just really broke me to know that after 10 years of everyone giving us their thoughts and prayers, after 10 years of everyone saying, ‘Enough is enough,’ and, ‘Never again after Sandy Hook’ — it happened again.”

Maggie was in third grade at the time of the shooting. She will graduate from Newtown High School next week. The other three survivors — Andrew, Jackie and Nicole — are now juniors at Newtown High. All of them are speaking publicly for the first time.

“I was in my second-grade classroom. I remember looking at my teacher’s face, and her shock. We knew it wasn’t a drill,” Jackie recalled. “When we ran to our cubbies to hide, I remember thinking, you know, I should hide to the back of the classroom, to the other side, so that I don’t get shot. And that should never run through a 7-, 8-year-old kid’s head. It shouldn’t run through anybody’s head.”

Maggie lost her best friend, Daniel Barden. Some of her starkest memories of the massacre are waiting to hear if he was alive and safe.

“There were neighbors telling us all the updates — that a class had been found in a closet, that other people were still in the firehouse,” she remembered of the aftermath 10 years ago. “We kept saying, ‘That was Daniel, Daniel was coming.'”

“It was very traumatic for me, because there was no comfort whatsoever,” she said. “No one could comfort anyone else because it was pure devastation and loss. We all loved this boy so much.”

Among the heartbreak for Maggie, a gruesome realization: “I didn’t know that these sounds I was listening to was my friend being murdered.”

Living through a mass shooting changed all four of the students. For Nicole, that means anxiety. For Jackie and Maggie, trouble with loud noises. And for Andrew, it meant nightmares in the immediate months after.

“I couldn’t get the sounds out of my head during the night,” he told ABC News. “I couldn’t close my eyes without reliving it.”

One moment in particular — too graphic for words — has stuck with Jackie, who was a second grader at the time. As the kids were exiting their school, they were told to put their hands on the shoulders of the student in front of them and to close their eyes as they walked.

“There was glass and obviously blood and I didn’t want to step on anything. So I did, I did open my eyes,” she said.

“That’s a thought that probably does not go away,” Raddatz told her.

“No,” Jackie said, closing her eyes.

Mary Ann Jacob, a library clerk at Sandy Hook Elementary, also detailed her experience to ABC News. Jacob was in the library at the time and locked 19 students in a closet to keep them safe.

Jacob said she came to realize the gravity of the situation — and the immensity of the loss — later, at a nearby fire station, where parents were looking to account for their children.

“They started lining kids up by class in the fire house so they could start to sign them out to parents,” Jacob said. “And it became evident very quickly that almost two whole classes were missing.”

All five survivors shared the horror they felt when they learned a gunman killed 21 people at Robb Elementary School in Uvalde last month.

All shared in the dismay and frustration they feel watching more school shootings occur.

“I’m struck by how sad it makes me that it keeps happening. And angry at the same time, because, you know, the world watched what happened to Sandy Hook,” Jacob said. “And there was no action after that.”

Like the other survivors, Andrew called for gun reform — an issue that remains intensely polarizing in Congress, where Republicans are reluctant to take up legislation they argue restricts the Second Amendment.

Andrew told ABC News that the government and the nation “know the solutions” to stopping more mass violence, pointing to proposed limitations on magazines for ammunition and age restrictions for purchasing assault-style weapons.

“I think what we know just needs to come to fruition.”

“If there is even one step we can take to save another child, or another parent, or another town, from the grief that has visited Tucson, and Aurora, and Oak Creek, and Newtown, and communities from Columbine to Blacksburg before that — then surely we have an obligation to try,” Obama said at a vigil for the Sandy Hook victims in 2012.

But those efforts failed. A vote on gun reform focused on background checks, led by Sens. Joe Manchin, D-W.Va., and Pat Toomey, R-Pa., did not pass the Senate — one in a string of largely unsuccessful efforts at new gun laws in Congress in recent decades.

Since then, no federal gun reform has come to pass.

“It makes me angry, because it doesn’t have to keep happening,” Jacob, the Sandy Hook library clerk, told ABC News. “And the fact that we saw what happened at Sandy Hook, and we saw how many children died, and how affected the survivors were, and how the ripple effects of gun violence affect so many people,” she said. “And we still act like we don’t know how to solve the problem is maddening.” Giants make in-person push for OBJ, but are Cowboys...

Opinion: I was caught in the uncomfortable middle of...

iPhone at 15: looking back at the original and...

POLITICO Playbook: The politics of the Jackson pick

Feds to drop charges against NYPD officer accused of...

Evening Edition: Case Made For Focusing On China

Nancy Pelosi’s Taiwan trip has intensified the US and...

All GPs to receive direct access to cancer tests

Developers want to know from Apple if an iCloud...

U.S. arms to Ukraine: Is it enough?

Former FTX CEO Sam Bankman-Fried was arrested, and the...

Russia’s last default sparked a crisis. This time is...

Trudeau Finds Surer Footing After Riding Out Protests and...

World Cup Now: What went wrong for Mexico in...

There are still some fantastic Chromebook Prime Day deals...

The Golden Globes return to NBC, as Jerrod Carmichael...

Sterling steadies near more than 2-year lows vs dollar...

How effective have sanctions been against Russia?

What to know about PFAS after Thinx underwear settles...